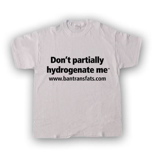 Kim Severson is a staff writer for the New York Times and co-author (with Cindy Burke) of The Trans Fat Solution: Cooking and Shopping to Eliminate the Deadliest Fat from Your Diet. Recently, the NYC Health Department conducted a year-long education campaign to help restaurants voluntarily reduce trans fat.  Overall, trans fat use did not decline at all.

In a related story, KFC was sued in June of this year by the CSPI for their startlingly high use of trans fat.  In October KFC announced it would eliminate most trans fats from its fryers, instead using soybean oil. Read the story here.

Kim Severson is a staff writer for the New York Times and co-author (with Cindy Burke) of The Trans Fat Solution: Cooking and Shopping to Eliminate the Deadliest Fat from...

James Watson is a professor at Harvard. He's written a book on the explosion of fast food culture in Asia, It's Golden Arches East : McDonalds in East Asia . Music...

Chefs all over the country call on food scientist Harold McGee to decipher the chemical reasons for their kitchen catastrophes. Harold’s book On Food and Cooking is a...

Louisa Chu is a chef and writer based in Paris and Chicago, and has been a Good Food correspondent since 2002. Good Food followed Louisa Chu through her year at the Cordon...

Peter Reinhart is a baking instructor at Johnson & Wales University.

Simon Ford of Plymouth Gin tells us about the fine flavors of gin and what goes into their centuries old recipe. Simon gets us started with a few recipes we can try at...

Grill Outside, Break the Law

Glendale recently began enforcing an ordinance that bans commercial grilling outdoors. This is having a big effect on Glendale's Armenian population since this kind of...