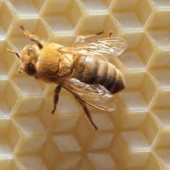 We may rarely think about it, but one group of insects are responsible for pollinating billions of dollars worth of seeds and crops nationally every year:  the tiny and hardworking honeybee.   What would happen if the honeybees went away?  It’s a very real threat, as a new syndrome researchers call “colony collapse disorder” is affecting the once thriving hives of beekeepers.  The condition is responsible for a massive honeybee die-off – with beekeepers losing 30-60 percent of their honeybees on the west coast and up to 70 percent on the east coast.   California, one of the largest agricultural areas in the country, could be hit particularly hard – especially the state’s almond growers, who rely on the bees to keep their trees productive.  Scientists are moving quickly to determine what the causes are, which could be anything from stress to pesticides to mite infestation.

Alexei Barrionuevo is a writer for the New York Times and he wrote an article about the bee die-off.  He gives us an update on how the problem is being tackled, what we know about the syndrome and whether or not it is an international problem.

While the word “vegetarian” wasn’t coined until the 1840s, the modern vegetarian movement came out of 17th-century England as a result of the adoption of cultures between...

Elizabeth Gilbert’s bestselling novel, Eat Pray Love is a memoir of a healing journey she embarked upon after a life-changing divorce. Through adventures in Italy, Mumbai...

Ever wonder how fruits become seedless? Laura Avery talks to David Karp about tangerines and the different processes that create the seedless version of this favorite...

San Francisco is a city of gustatory delights – a mélange of cuisines, multicultural influences and world-class chefs all coming together in a food lover’s dream. While it...

Jonathan Gold turns up the heat with a visit to Chichen Itza – a downtown Los Angeles restaurant that specializes in the habanero-infused cuisine of Mexico’s Yucatan...

Many of us have a love/hate relationship with whole grains. Thanks to food marketers who use it on food labels and advertising, we are bombarded with information about...

We may rarely think about it, but one group of insects are responsible for pollinating billions of dollars worth of seeds and crops nationally every year: the tiny and...

Genetically modified foods have always been surrounded by controversy – and the recent declaration by the FDA that cloned beef is safe to eat is no exception. Cloning a cow...