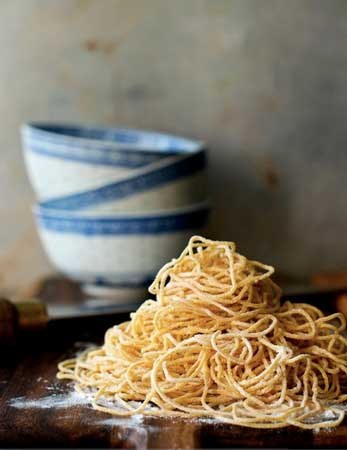 Ching Ching Ni is a Metro Reporter for the Los Angeles Times.  She recently wrote about the law requiring fresh Asian noodles to be refrigerated.  The law indicates that perishable food must be kept at or below 41 degrees or above 140 degrees so as to avoid food borne illness.

Critics of the law say that fresh rice noodles would be ruined if they were refrigerated - they would become brittle.  There have been no reports of illness from Asian noodles.

Photo Courtesy: Todd Porter & Diane Cu ( The White on Rice Couple ) Ching Ching Ni is a Metro Reporter for the Los Angeles Times . She recently wrote about the law...

This fall, Evan Kleiman is making Ruth Reichl's Roast Pumpkin with Cheese Fondue . It's a whole pumpkin filled with a strata, which is basically layers of bread, cheese,...

David Sax is the author of Save the Deli: In Search of Perfect Pastrami, Crusty Rye, and the Heart of the Jewish Delicatessen .

Alton Brown hosts Good Eats on Food Network.  His new book about the show is Good Eats: The Early Years .

Stacie Hunt is a certified AIS Sommelier who works with Splash Productions and Du Vin Wine and Spirits .