Ralph Whitney is a blueberry farmer in Carpenteria.  He sells a variety of berries at the Santa Monica Farmers Market including the emerald, star, and misty varieties.  He grows his berries outdoors on raised beds.  Harvesting blueberries is hard work -- five pounds are picked in about an hour. 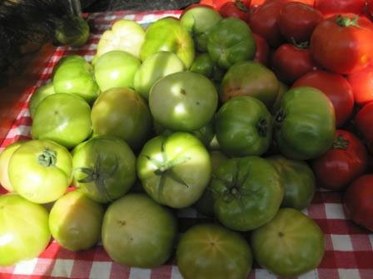 Amelia Saltsman is the author of the Santa Monica Farmers Market Cookbook.  This week she is making a pork stew with fire roasted green tomatoes.  She gets her green tomatoes from Wong Farms.

Place the tomatoes, one at a time, directly on the burners of a gas stove turned to medium-high and roast until skins are charred and peeling back from the tomato and some of the flesh is starting to blacken in spots, 2 to 5 minutes. (Because they are unripe and firm, the tomatoes will hold their shape and will be easy to turn with tongs.) Or, heat broiler to high, place whole tomatoes close to heat source and broil on all sides as above. Peel and core the tomatoes and chop into small pieces. You should have about 4 cups.

For added smoky flavor to your stew, peel the onion and roast it over an open flame or under broiler until blackened in spots, 2 to 3 minutes. To toast the garlic, place unpeeled cloves in small heavy skillet or on griddle and toast until browned in places, 2 to 5 minutes. Chop onion and peel garlic cloves. If using, fire roast jalapeno, peel, and chop, reserving some of the seeds.

Pat meat very dry and season with salt and pepper. In a heavy, wide pot, heat oil over medium-high heat and add meat, in batches if necessary to avoid crowding, and brown well on all sides. Remove meat to bowl or platter.

Turn heat down to medium and add chopped onion and a little salt to pot. Sauté, scraping bottom of pot to loosen brown bits, until onion is softened and turning golden, 7 to 10 minutes. Add chopped tomatoes, garlic cloves, and jalapeno pepper, bring to a bubble and reduce heat to keep tomatoes at a steady simmer. Cook until the tomatoes start to break down, 10 to 15 minutes.

Return meat and any juices that have collected to the pot. Add enough stock or water to bring level of sauce halfway up meat.  Partially cover pot, and braise meat until fork tender, anywhere from 1 1/2 to 3 hours, adding additional liquid if necessary during cooking time.

Shortly before you’re ready to serve, stir greens into stew and cook until tender, 10 to 20 minutes. Taste and add salt, pepper, lime juice, and jalapeno seeds as needed to adjust flavors. Serve topped with chopped raw onion, cilantro leaves, sliced radishes, and lime wedges. This stew would be delicious over beans, rice, or grits.

A Conversation about Food and Farming

Russ Parsons is the food editor at the Los Angeles Times. He recently wrote about the national conversation about food and farming. Music Break: Mas Que...

Marion Nestle is a professor of nutrition, food studies and public policy at New York University. She's been following the proposed tax on soda and has written about it on...

Brian Geiger is the Food Geek. He has a blog and writes a column for Fine Cooking . According to Brian, cast iron pans can provide some iron to your diet. However,...

Gustavo Arellano is the food editor of the OC Weekly , where he also writes the Ask a Mexican column. For the best breakfast burrito in Orange County, Gustavo heads to...

Eddie Lin writes the blog DeepEndDining.com .  In his new book, Extreme Cuisine , he explores some exotic dishes of various cultures.

Renee Maas is the water program organizer for F ood and Water Watch’s Los Angeles office. Since the water infrastructure in many municipalities are in need of repair, some...

Ralph Whitney is a blueberry farmer in Carpenteria. He sells a variety of berries at the Santa Monica Farmers Market including the emerald, star, and misty varieties. He...