Chef and culinary instructor Amanda Cushman is grilling vegetables this summer.  She recommends marinating them in olive oil and fresh herbs for about 30 minutes before cooking.  Slice eggplant and zucchini lengthwise and drizzle with olive oil.  Make sure the grill is very hot before putting the vegetables on.  You'll know when to flip when they don't stick to the grill.  She also grills fruit for dessert and serves it with a rum sauce.

Heat the oil in a small skillet over medium heat and sauté the shallot, garlic and ginger for 2 to 3 minutes. Remove from the heat and transfer to small bowl. Add the soy, miso, sugar, rice vinegar, water and cilantro and whisk.

Heat a grill pan or outdoor grill until hot. Brush the eggplants on the cut side with some of the glaze. Place on the grill and lower the heat and grill for 6 to 8 minutes turning occasionally, brushing often with the glaze. Transfer to a platter and spoon some of the sauce over. Serve with rice and cilantro leaves as a garnish.

Melt 4 tablespoons of the butter in a medium skillet over medium high heat. Add the sugar, cinnamon, and a pinch of salt and pepper. Cook for about 5 minutes to dissolve the sugar.

Heat the rum in a separate small skillet and tilt to ignite the alcohol. Move the pan back and forth as you are pouring the rum over the sugar mixture. When the flame subsides set the pan aside. Melt the remaining butter in the skillet that the rum was in.

Heat a grill pan or outdoor gas grill until hot. Brush the cut sides of the fruit with the melted butter. Grill cut side down until softened slightly about 5 minutes turn brush with more butter and grill the other side another 4 minutes. Remove the mangoes to a cutting board and slice the mango into slices and arrange on a platter with the other fruits.

Serve the grilled fruit with ice cream and rum sauce. 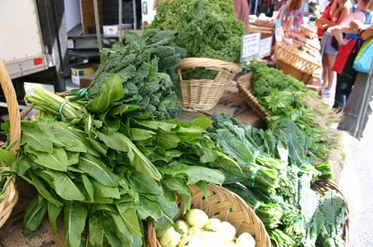 Eric Stenberg is an apprentice at Fairview Gardens.  He recommends grilling dandelion greens kale by putting them first in a tin foil basket.  Add garlic, herbs and seal it by pinching the edges together.  The greens will be wilted when ready to eat.

Rob Anderson is one of the founders of VeggieTrader.com , a place where growers can trade produce. The website works like classified ads or Craigslist. Simply post a...

Alexa Hyland is a reporter for the L.A.

The History of Ice Cream

Jeri Quinzio is the author of Of Sugar and Snow: A History of Ice Cream Making . When they figured out how to freeze liquids in the 17th Century, people started adding...

Trekking LA: Local Adventures in a Global City is a partnership between LA Commons and the UCLA Department of Urban Planning. This summer they are hosting eating tours...

Jonathan Gold is the Pulitzer Prize-winning food critic for the L.A. weekly . This week he recommends Shanghai-style Chinese restaurant Green Village , which has had...

Camelia Coupal is the owner of Coupa Cafe in Beverly Hills, which serves Venezuelan cuisine. The national dish of Venezuela is Pabellon, which is shredded beef served...

Chef and culinary instructor Amanda Cushman is grilling vegetables this summer. She recommends marinating them in olive oil and fresh herbs for about 30 minutes before...

Sisters Marilyn and Sheila Brass are the authors of Heirloom Cooking and Heirloom Baking . They're currently working on a new book called Heirloom Cookies. Most of the...