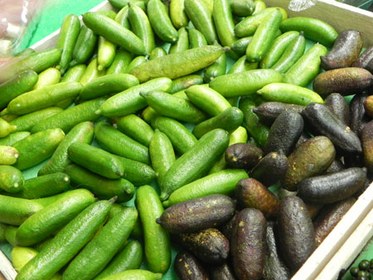 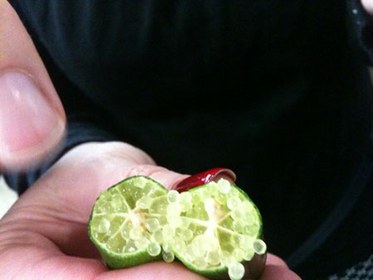 David Karp is a pomologist and a contributor to The Los Angeles Times.  The finger lime is a citrus variety from Australia.  It's called the caviar of citrus because of its small sacs of juice (as opposed to the elongated sacs in lemons and limes).

In a bowl mix the spices to taste with the sea salt. Cut the finger limes into quarters long ways to the base, but so that the quarters stay together. Push the seasoned salt into the center of the finger lime and pack the finger limes as tightly as possible into an airtight jar.
The less space there is between the finger limes the more attractive they will look and the less salt you will require. The finger limes will be ready in 1 month of preserving and will last for about 2 years.

Valerie Aikman-Smith is a food stylist and the author of Salt: Cooking with the World's Favorite Seasoning . Salt-Crusted Shrimp Adapted from Pearl Oyster Bar...

Mari Silva is a KCRW volunteer and a college student. She visits Good Food occasionally to tell us her free food finds. She recently traveled to New York City where she...

Marion Nestle is a professor of nutrition, food studies and public policy at New York University.

Grace Young's latest book is Stir-Frying to the Sky's Edge . Grace says it's very important to use a flat bottomed wok and to make sure it's very hot before cooking. Let...

Evan with the Island Beehive Beekeepers Peter Davis is a beekeeper on Kangaroo Island , a sanctuary for the Ligurian bee. This type of bee was introduced to Kangaroo...

Lesley Bargar Suter is the dine editor at Los Angeles Magazine .  There are so many places to have lunch in L.A., from food trucks to sandwiches to high-end sit down meals.

David Karp is a pomologist and a contributor to The Los Angeles Times . The finger lime is a citrus variety from Australia. It's called the caviar of citrus because of...

Hot Dogs for Everyone

Jonathan Gold is the Pulitzer Prize-winning food writer for the LA Weekly. This week, he reviews The Slaw Dogs in Pasadena. Jonathan likes The Green Monster, the Caesar...