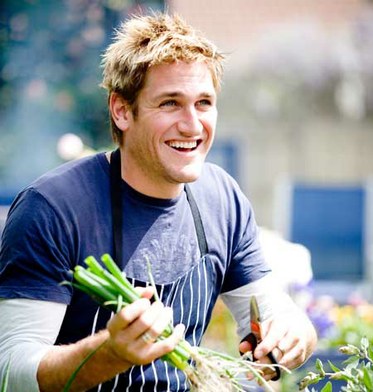 Curtis Stone is an Australian chef, cookbook author and host of Take Home Chef on TLC. His latest book is Relaxed Cooking with Curtis Stone.  Curtis also has a selection of cooking tools, including this reversible cutting board called the Flipper.

Preheat the oven to 375°F.  Place the tomatoes on a small baking sheet and drizzle with, the 2 teaspoons olive oil and sprinkle with salt and pepper.  Roast the tomatoes in the oven about about 3 minutes, or until they begin to split.  Remove the tomatoes from the oven and let them cool slightly,

Bring a large pot of salted water to a boil.  While the water is heating, heat the remaining 1 tablespoon  of oil in a heavy saute pan over medium heat.  Add the salami and cook for 30 seconds on each side, until light golden in color.  Remove the salami from the pan and reserve,

Return the pan to the heat, add the garlic, and saute for 1 minute, or until tender.  Add the tomatoes and saute for 3 minutes.  Add the wine and simmer for about 3 minutes, or until reduced about half. Add the olives and capers and toss gently.  Bring the mixture to a simmer and add the salami and parsley.

Cook the pasta in the boiling salted water until al dente.  Drain the pasta and toss it in the pan with the sauce.  Season the pasta to taste with salt and pepper.

Place half of the chopped pineapple, papaya, cantaloupe, mango, and kiwi fruits in a blender, Add % cup of the coconut water and 1 cup of the ice, Puree until smooth, Divide the smoothie among 3 tall glasses, Repeat with the remaining ingredients, and serve immediately.

Mix the soy sauce, barbecue sauce, honey, garlic, and ginger in a resealable storage bag to blend. Add the chicken, seal the bag, and toss to coat with the sauce. Refrigerate for at least 1 hour but preferably overnight.

Position an oven rack 8 to 10 inches from the heat source and preheat the broiler.  Line a large, rimmed baking sheet with heavy-duty foil. Transfer the drumsticks and marinade to the prepared baking sheet and broil, turning the drumsticks occasionally and watching them closely, for 25 minutes, or until the chicken is cooked through and the marinade has glazed it. Sprinkle the sesame seeds over the chicken, and serve.

The Evolution of the TV Cooking Show

Kathleen Collins is the author of Watching What We Eat: The Evolution of Television Cooking Shows . The very first cooking show on TV was I Love to Eat, hosted by culinary...

Jonathan Gold is the Pulitzer Prize-winning food critic for the L.A. Weekly. He recently feasted on goat in Koreatown. For a late night meal, he recommends Bulrocho ....

Under the Tuscan Gun

Debi Mazar and Gabriele Corcos host the web video series Under the Tuscan Gun . Debi is an American actress and her husband, Gabriele, is an Italian chef from Fiesole,...

Ruth Reichl is the Editor-In-Chief of Gourmet . Her latest book is Not Becoming My Mother and Other Things She Taught Me Along the Way...

Katie Stagliano is a ten-year old from Summerville, South Carolina. Last year, in a third grade project, she planted a cabbage seedling. That cabbage grew to 40-pounds....

Curtis Stone is an Australian chef, cookbook author and host of Take Home Chef on TLC. His latest book is Relaxed Cooking with Curtis Stone . Curtis also has a selection...

Mark Caro is the author of The Foie Gras Wars: How a 5,000 Year Old Delicacy Inspired the World's Greatest Food Fight . In 2006 Chicago banned foie gras, the fattened...

Chef Christophe Bernard, Academic Chair of the International Culinary School at the Art Institute of California, Los Angeles. His students will be making a...