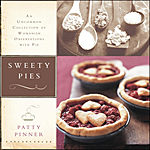 They say love can be tasted in the food that's prepared, especially when it's for family and friends. Some might say pies are the ultimate comfort food and are a true measure of a woman's cooking prowess. Author Patty Pinner lovingly remembers the domestic divas of her Michigan childhood as they cooked their way into a man's heart through pies in Sweety Pies.

Preheat the oven to 350°F. Prepare the pie crust and set aside.

In a medium-size bowl, beat the eggs. Add the butter, vanilla, sugar, and corn syrup and stir until well mixed. Fold in the oats until well blended, then pour the mixture into the crust.

Place in the oven and bake until the crust is golden brown and the filling firm to the touch, about 45 minutes. Let cool on a wire rack 15 to 20 minutes before serving.

Preheat the oven to 400°F. Prepare the pie crust and set aside.

Make the crumb topping. In a medium-size bowl, stir together the flour, brown sugar and cinnamon until well mixed. Work the butter in with a fork or your fingertips until the mixture resembles crumbs the size of tiny sweet-peas. Set aside.

Make the filling. In a large bowl, stir together the sugar and flour until well mixed. Gently stir in the blueberries and lemon rind and juice. Pour the mixture into the pie crust, then dot it with the pieces of butter. Sprinkle the crumb topping evenly over the top of the pie.

Reduce the oven temperature to 350°F. Place the pie in the oven and bake until the topping is golden brown, 40 to 45 minutes. Let cool completely on a wire rack before serving. This looks and tastes wonderful with a dollop of vanilla ice cream sitting on top.

Pig Ears and Trotters; Will It Blend?; Plastic Alternatives

Using heat and soap on plastics can cause dangerous chemicals to leach into food. The effects seem most severe in small children. Concerned parent Jenny Rask went on a...

Sarah Jo Marks curates a plush dinner exhibition at Munky King that combines humor with art. All plush toys are made in the shape of foods and will be highlighted in three...

Breakaway Cook Eric Gower cooks up garlic confit, which he keeps in his refrigerator to use whenever garlic is called for in recipes. He recommends using the same amount...

It all began with product testing, the Total Blender and a wood 2x2. Throw in a video recorder and the rest is YouTube history. Blendtec CEO and founder Tom Dickson...

Fergus Henderson, chef at St. John restaurant, turns bones, gelatins and pig parts into high-end cuisine. In Beyond Nose to Tail , his sequel to Nose to Tail Eating, he...

Many land-owning Cubans fled the country after the 1959 Cuban Revolution. As one of the first Cuban exiles in Southern California in the early '60s, playwright Eduardo...

They say love can be tasted in the food that's prepared, especially when it's for family and friends. Some might say pies are the ultimate comfort food and are a true...