At West Hollywood’s sushi bar, Hadaka, the executive chef and owner, Edward Brik knows that sex sells.  To prove his point, Edward has introduced the sushi service “nyotaimori” at his restaurant.  The sushi presentation, also known as body sushi, is a colorful assortment of sushi rolls, sashimi and raw fish that are carefully arranged on a semi-nude female model (the “semi” qualifier being a few strategically-placed banana leaves).  The model must be trained to lie still for hours and be able to endure constant exposure to the cold sushi placed on her body. 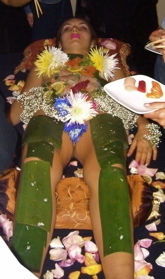 Eddie Lin, a freelance writer and co-author of the food blog Deep End Dining, recently attended a body sushi presentation and wrote an article about it for the New York Times.  He found that the history of nyotaimori is largely unknown but it has been associated with Japanese organized crime (“yakuza”).  Many experts in Japanese culture are aware of the practice but don’t fully know its origins – although some speculate that its popularity may have risen during Japan’s economic boom in the late 1980s, when many Japanese had money to burn and found innovative and creative ways to indulge.

Eddie talks with Evan about the sometimes controversial but undeniably sexy side of nyotaimori.

In March of 2007, writer Mark Schatzker began traveling around the world the slow way. The rules of his trip: he can take any form of transportation he chooses, as long as...

Laura Avery talks with cookbook author Amelia Saltsman about lettuce, which is currently in season. She also meets with La Cachette chef, Jean Francois Meteigner, who...

Can you distinguish someone’s sexual orientation by the contents of their grocery cart? Ted Allen, the food and wine connoisseur from Queer Eye for the Straight Guy, takes a...

Chef Carol Cotner Thompson has worked as a culinary professional for more than twenty three years. She graduated from the California Culinary Academy in 1986. Thompson has...

The Quest for Fresh Water

Water is the key to life. When a natural disaster hits, the immediate aftermath is a flurry of finding survivors, providing medical care, and seeking out potable water....

And the Winner Is...Jonathan Gold

There are few foods on earth as basic, revered and intrinsic to culture as the tortilla. As a simultaneous source of nutrition and comfort, it is unrivaled. However, this...