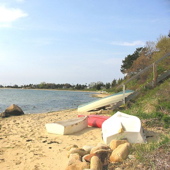 Author Jessica Harris is known for her writings about the food traditions of the African diasporia, so it may be surprising that her latest book, Martha’s Vineyard Table, focuses on the food history of this traditionally elite and seemingly homogenized vacation paradise off the coast of Massachusetts. Unknown to many, Martha's Vineyard has a rich history of African American culture, which has heavily influenced the development of the island's favorite foods. From Jamaican (Red Pea Soup with Spinners, made with kidney beans and dumplings) to Southern African-American (Corn Fritters), Jessica highlights island classics with multicultural touches. She also spotlights the African American community itself, from the neighborhoods and beaches that helped shape Martha's Vineyard.

Combine all of the ingredients except the salt and pepper in a saucepan, stir to mix, and place over medium heat. Bring to boil, lower heat to simmer, cover and cook for 15 minutes, or until the vegetable are tender and the flavors are well blended. Remove the chile when the dish has reached the desired spiciness. Season with salt and pepper and serve hot.

Combine the broth, butter and salt in a 5-quart saucepan and bring to rolling boil. Gradually add the grits, stirring constantly, and let the mixture return to a boil. Lower the heat to a simmer and cook the grits uncovered, stirring occasionally so that they will not stick or form a skin, for about 25 minutes, or until they are creamy or done to your taste. (Folks who like to cook their grits longer will need more liquid.) When the grits are done, spoon them into individual bowls and top each with one-fourth of the lobster. Serve immediately.

Preheat the oven to 400oF.  Prepare the corn bread batter as directed and reserve.  Put 4 tablespoons of the butter in a 9-by-12-inch baking pan and place in the oven.  When the butter has melted, remove the pan from the oven and reserve.

Place the squash in a saucepan and add salted water to cover. Bring to a boil and boil for 8 minutes, or until the squash is soft.  Drain well and place in a bowl.  Season with salt and then mash in the remaining 4 tablespoons butter with a fork.  Set aside.  Heat the olive oil in a skillet over medium heat.  Add the onions and garlic and saute for 2 to 3 minutes, or until the onions are lightly browned.  Add the collard greens, season with the soy sauce, thyme, and pepper, and continue to cook, stirring occasionally from the bottom so the onions don't stick, for 6 to 7 minutes, or until the greens are wilted.  Remove from the heat. Pour half of the corn bread batter into the butter in the baking pan. Spoon the collard greens mixture on top of the batter. Bake for 20 minutes, or until golden brown. Remove from the oven and let cool. Cut into squares to serve.

After noticing that meat was everywhere in art, dialogue and our kitchens, Amy Standen and her friend Sasha Wizansky co-founded and created Meatpaper magazine as a way to...

Ramen, the Japanese dish of noodles served in broth, actually originated in China. It differs from Japanese noodle dishes because it is served in meat-based broth, as...

In 2005, Tom Kevill Davies (aka 'The Hungry Cyclist') began a culinary bike tour with a twist. He cycled more than 14,000 miles across the Americas from north to south,...

Brentwood dentist Nancy Schort shares the sticky truth about the effect of sugary sweets on our teeth. One of the biggest culprits is chewing gum. But are there benefits as...

Author Jessica Harris is known for her writings about the food traditions of the African diasporia, so it may be surprising that her latest book, Martha’s Vineyard Table ,...

Gabriel Gabreski is the Executive Chef at Blue on Blue restaurant at the Avalon Hotel in Beverly Hills.

David Lebovitz is a sought-after cooking instructor with an award-winning food blog . Trained as a pastry chef in France and Belgium, he worked in Chez Panisse in Berkeley,...