The Life of Garbage 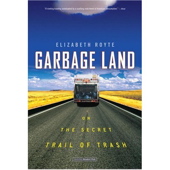 Science writer Elizabeth Royte began a massive year-long project cataloging the items thrown away by her family of three.  She followed the trash, recycling and everything that was disposed of, to see where it finally ended up.  She uncovers the final resting place of our garbage, shares her views about composting and the realities of a “zero waste” society.

Elizabeth Royte is the author of Garbage Land:  On the Secret Trail of Trash, and has written for the New York Times Magazine, Harper's, National Geographic, the New York Times Book Review, the New Yorker, Outside, Smithsonian, and other national magazines.
You can read more of Royte's “garbage scraps” on her blog at PBS's website Borders.

The Twinkie Deconstructed; The Life of Garbage; Ed Begley, Jr.

The word “providence” conveys a level of protection and guidance – a word not lost on the chef of Providence restaurant, Michael Cimarusti. Jonathan Gold visits the...

The Life of Garbage

Science writer Elizabeth Royte began a massive year-long project cataloging the items thrown away by her family of three. She followed the trash, recycling and everything...

Laura Avery shows us the first spring crop of blueberries! She talks with Linda from Whitney Ranch Farms of Carpinteria (near Santa Barbara) about different varieties of...

It’s fairly easy to stock your kitchen with the basics -- pots, utensils, and a few appliances are enough to manage most cooking tasks. However, if you have the right tool...

The Catch of the Day

The warm waters off Southern California's coast have become an ideal home to squid, making the soft-bodied invertebrates the unexpected backbone of California's fishing...

Twinkie’s have an almost endearing reputation of being so full of preservatives that they could stay fresh for a lifetime -- and while food labels openly tell us what’s in...