In just two weeks, we’ve gone from 64 tortillas to just 16. Three of our top four No. 1 seeds remain, but there have been a lot of upsets along the way. And the tortillas that remain truly embody this year’s theme of Tournament of Champions: Only four have never made it into the Suave 16 before. But there are still two more rounds to play before our Fuerte Four, so nobody better rest on their comales, because the competition is about to get hot.

No. 1 Taco Maria vs. No. 9 La Tolteca:
La Tolteca doesn’t make a bad corn tortilla, but it’s just no match for the blue corn wonder of Taco Maria. There’s a reason why it has won the corn category every year, you know?

No. 5 Nuño Brothers vs. No. 4 Mitla Cafe:
Nuño Brothers’ machine-made tortilla is good, but it’s not even my favorite SanTana-based machine-made tortilla — that would be La Rancherita, which is in Connie’s corn bracket. And even that tortilla can’t match up to the hand-made history that is Mitla Café. Con esto les digo (this says it all): I have a bunch of corn tortillas in Ziploc bags in my fridge right now. The one I kept going to again and again was Mitla.

No. 6 Acapulco Tortilleria vs. No. 3 Carnitas El Rey:
Every week, I go to my dad’s house to make burritos out of flour tortillas that he buys from Acapulco’s spot in East LA. He also buys corn tortillas for himself, and while they’re good, the flour tortillas are better. And again, machine-made tortillas are almost always at a disadvantage against handmade, and that’s what we have here. Carnitas El Rey’s face-sized tortillas are a monster that are now just the fifth-ever tortilla to make it into the Suave 16 three years in a row.

No. 7 Tortilleria Playa Azul vs. No. 15 Trader Joe’s:
Here, we have a stunning reverse. Playa Azul’s small-ish corn tortillas are wonderful, but WTF is Trader Joe’s secret? I wish someone could give me the name of the tortilleria who makes their tortillas for them, because these are GOOD. After I finished my pack from Mitla Cafe, I finished off the Trader Joe’s one by digging into some leftover Trader Joe’s spicy hummus.

Gustavo’s takeaway: My bracket is playing out as it should, as three of the top four seeds remain. The only anomaly is Trader Joe’s — trust me, folks, I’m as perplexed as you. Great masa don’t lie — but can it compete against even better masa? 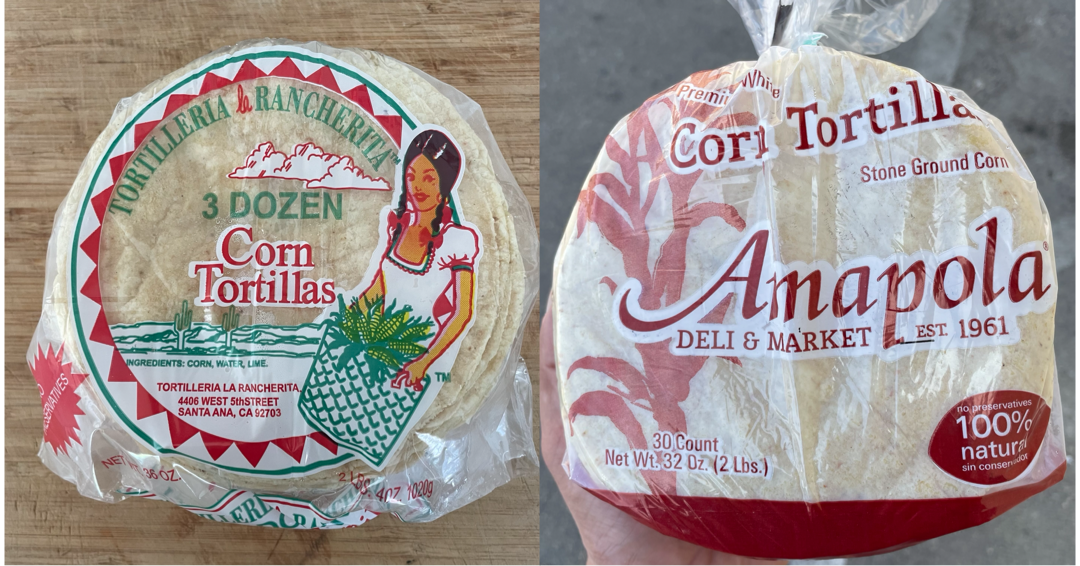 Two of this week’s corn contenders. Photos by Gustavo Arellano.

This one's an upset for me. I fully expected Kernel of Truth to win by its earthy goodness. But Tallula clinched it on texture and taste and well... Isn't that everything?  I soooo did not want a chi-chi seaside spot to win. But their t-game is strong!

No. 12 Amapola Deli & Market vs. No. 13 Rubén’s Tortilleria:
As we level up to this round, what was once appealing about Ruben's (light and snacky) is its downfall. Now flavor carries more weight, and in that, Amapola comes through and then some, with size and texture.

No. 11 La Gloria vs. No. 3 La Princesita:
La Princesita is one very good tortilla. It packs the earthiness typical of its thicker kin into the standard-sized disc you find in grocery stores everywhere. This makes it utilitarian (rolling, tearing, scooping), but definitely not run-of-the-mill. Wait, do tortillas actually get run through a mill? Also, shout out again to La Gloria's somewhat popcorn-y flavor, but they just can’t pull it off.

Gustavo’s takeaway: While my bracket is the epitome of order, Connie’s is one giant desmadre. This is only the second time that three contestants who ranked lower than the ninth seed have made it into the Suave 16, and the first time the mighty non-GMO organic corn wizards Kernel of Truth do not make it into the Suave 16. But their brilliance in making machine-made corn tortillas that are also delicious continues here, as three of the four remaining tortillas come from large-scale makers, proving that a great machine-made tortilla ain’t as hard to pull off as people make it out to be. 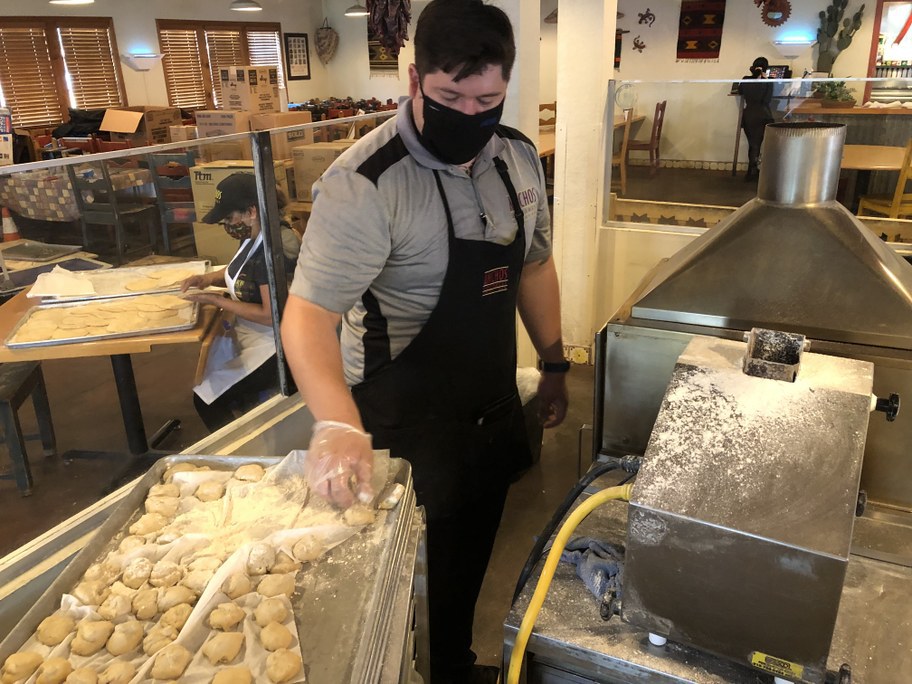 It's hard to beat last year's winner. Casablanca is well-seasoned and works well however you want to eat it. But HomeState's great tortilla stands up to any type of use. It's flaky, seasoned just right, reheats well, and even tastes great right out of the fridge. Casablanca's only did when reheated.

Salazar's consistency, seasoning, and overall everything stood out for me. I absolutely loved theirs, and La Fortaleza was no match.

I truly hate that these two were up against each other. I loved the creaminess of San Gabriel and how it was slightly crunchy. But Ancho's is so freaking delicious, pita-like, and fluffy, and can be used for so many purposes.

No. 7 El Ruso vs. No. 2 Jimenez Ranch Market:
Jimenez must be going through something, because I usually think their tortillas are wonderful. But not this time. And if last year's tourney was a solid reminder: In a competition, you have to judge them based on that year’s tasting. There was something missing in the Jimenez tortilla, but not in El Ruso. Walter's tortillas are delicious, nutty, and have a good bite.

Gustavo’s takeaway: It’s a NELA chipster party, as HomeState (Highland Park), El Ruso (Silver Lake), and Salazar (Frogtown) legitimately show the real Eastside what’s up. The odd duck here is Ancho’s, which is based in a Riverside shopping plaza where the other tenants are a church and some other forgettable businesses — proof that wonderful tortillas can be found anywhere. 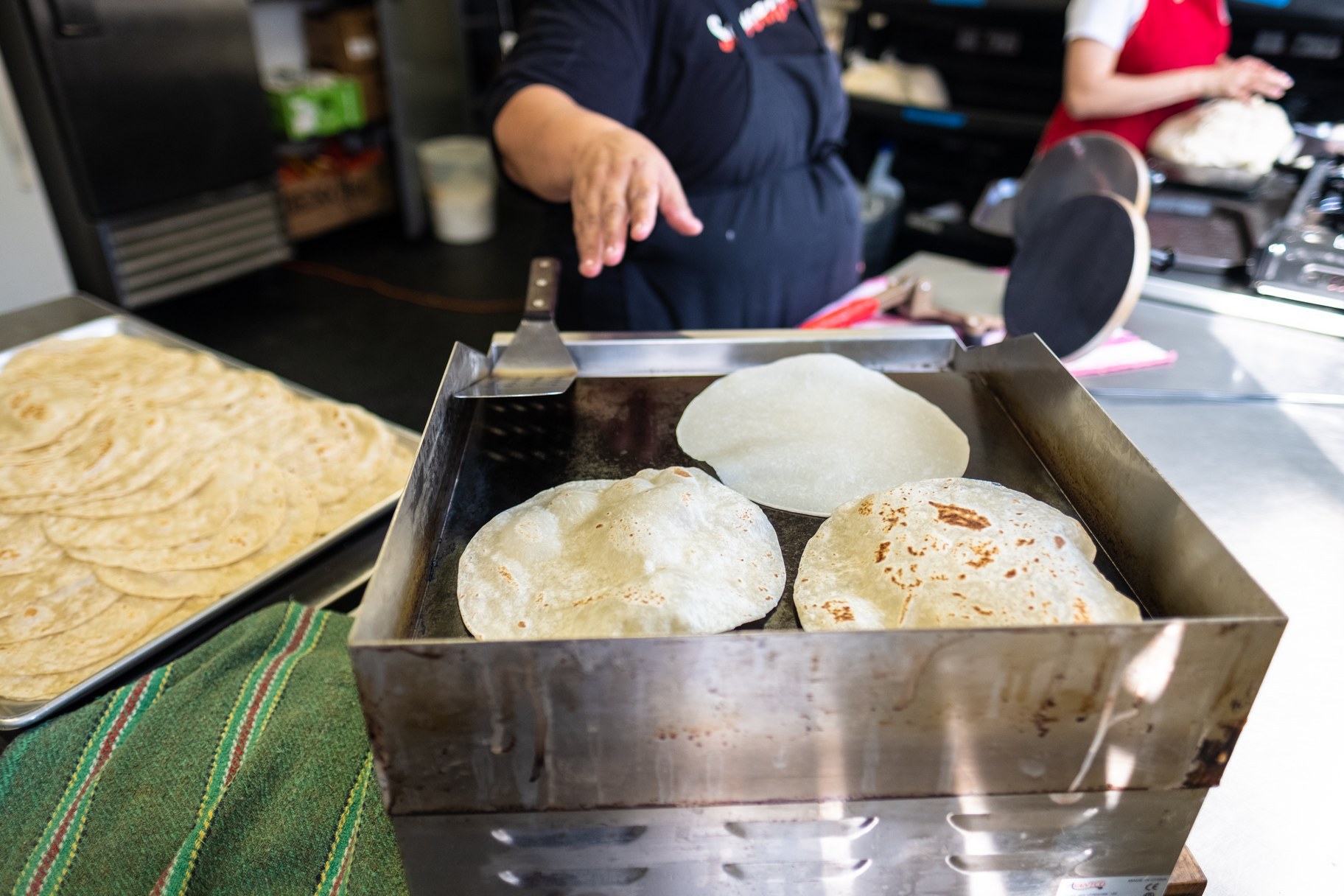 Throwing tortillas onto the heat at Sonoratown. Photo by Amy Ta/KCRW.

No. 1 Sonoratown vs. No. 9 Paco's Tacos:
This was close!  Basically it came down to salt or no salt. The Sonoratown tortilla is seasoned while Paco's is not, which I would argue serves the food on the menu. Paco's tortilla had the slightest stodginess as well while Sonoratown was flaky, pliable, delicate and strong.

No. 5 Bar Amá vs. No. 4 El Cholo:
No contest on the flavor side.  Bar Amá was filled with fresh, local-grain goodness without being a hippie tortilla. As for texture, I could eat Bar Amá tortillas all day, while El Cholo's are just too much on every front. Too thick for a tortilla made with milk, in my opinion. It makes for a clunky, stodgy texture and the flavor, while not rancid, was somewhat off.

No. 11 Graciana's vs. No. 14 Acapulco Tortilleria:
These two were crazy close, the closest matchup of the ones I’ve tasted this year so far. Both are excellent everyday tortillas. I picked Graciana's for slightly more flakiness.

Gustavo’s takeaway: In honor of Greater LA host Steve “Hola Steve” Chiotakis, I’ll get all Greek mythology here. We have three Tortilla Olympians with Sonoratown, Bar Amá, and Burritos La Palma, and one Titan in Graciana’s representing the old guard of flour power in Southern California. Will this Sylmar-based factory be more Zeus or Cronus?