Lisa Gross founded League of Kitchens, a New York-based group of home cooks from all over the world who host intimate gatherings, teaching people their recipes. When the city shut down, Gross canceled six weeks of sold out classes and devised a plan to stay in business. She trained her group of teachers, mostly older immigrant women, to begin online lessons. Mab Abbasgholizadeh, an Iranian refugee and League of Kitchens instructor, reached out to her mother and other female relatives to learn the childhood recipes she was always curious about, which she is passing along to her class participants.

Mab remembers her mom making this dish for special occasions, like Yalda, the Persian solstice holiday, or Nowruz, the Persian new year. It not only was a break from the food they mostly ate from her father’s restaurant, but it signaled that a party was coming. During the pandemic, Mab was nostalgic for the smells and tastes of home. So, she recreated her mom’s dish (consulting with her on Skype), naming it after her, and adjusting the method and ingredients to enjoy any day, not just party days.

- Chop 1 of the onions. Put a Dutch oven over medium heat and add 1 tablespoon of the oil and the onions.
- Cook until they start to sizzle, about 2 minutes, and then stir in the turmeric.
- Arrange the chicken skin side down on top of the onions and cook for 1 minute.
- Flip them over, turn the heat to low, and cook for 5 minutes. Then stir in 1⁄2 teaspoon of the salt to coat the onions and chicken. If you are not using a Dutch oven, or you are cooking on an electric stove, add 1⁄2 cup of very hot water. - Put the lid on, make sure the heat is as low as you can get and on the smallest burner, and cook for 30-40 minutes.
- Meanwhile, soak the prunes in the water in a small bowl for 30 minutes.
- Put the prunes and their soaking liquid into a small saucepan.
- Bring to a simmer over high heat, and then lower the heat to keep it gently simmering until soft all over, stirring occasionally, about 30 minutes.
-Turn off the heat under the Dutch oven and remove the chicken from the pan.
- Pour the onions and cooking liquid into a small bowl (you will use 1⁄4 cup later).
-Turn the heat under the pan to medium and add the remaining 3 tablespoons oil (enough to generously coat the bottom). When it’s hot, about 2 minutes, return the chicken to the pan skin side down, and turn the heat to low.
- Cook, without disturbing the chicken, until the skin browns, 7 to 10 minutes. Flip the chicken over and cook until brown, 10 to 12 minutes. -Remove from the pan.
-Meanwhile, chop the remaining 2 onions. Put a large skillet over high heat and add the ghee. Once it’s hot, add the onions and cook, stirring, until lightly browning on the edges, 8 to 10 minutes, adjusting the heat if starting to burn. -Turn the heat to low and cook, stirring, until the onions are soft and brown all over, about 3 minutes.
- Add the onions to the chicken pan and turn to medium-low, coating the onions with the chicken oil.
- Cook for 2 minutes, and then add the cumin and cinnamon and cook for 3 more minutes.
- Turn off the heat and add the saffron water, rose water, prunes (without the cooking liquid), and the reserved 1⁄4 cup chicken-onion cooking liquid. Put the lid on and let steep and sit until serving.
-Stir in the remaining 1⁄4 teaspoon salt.
-Plate the chicken and pour the sauce on top. Arrange the parsley, scallions, cilantro, and radishes on a plate and serve alongside the chicken (and ideally, together with basmati rice).

Cook’s Note: A platter of fresh herbs, called sabzi khordan, is served with every Persian meal; it’s a refreshing element to balance the cooked dishes it accompanies. Any fresh green herbs will do as the base, but Mab will always include radish and scallion. Mab’s first shopping lesson as a child was how to select these fresh ingredients every morning.

Mab buys saffron threads and then grinds them into a fine powder to store in a jar.
Saffron water is a key ingredient in many Persian dishes.

-Put the saffron in a small bowl and grind to a fine powder with a pestle.
-Add the ice cubes and set near the stove to warm up and melt. 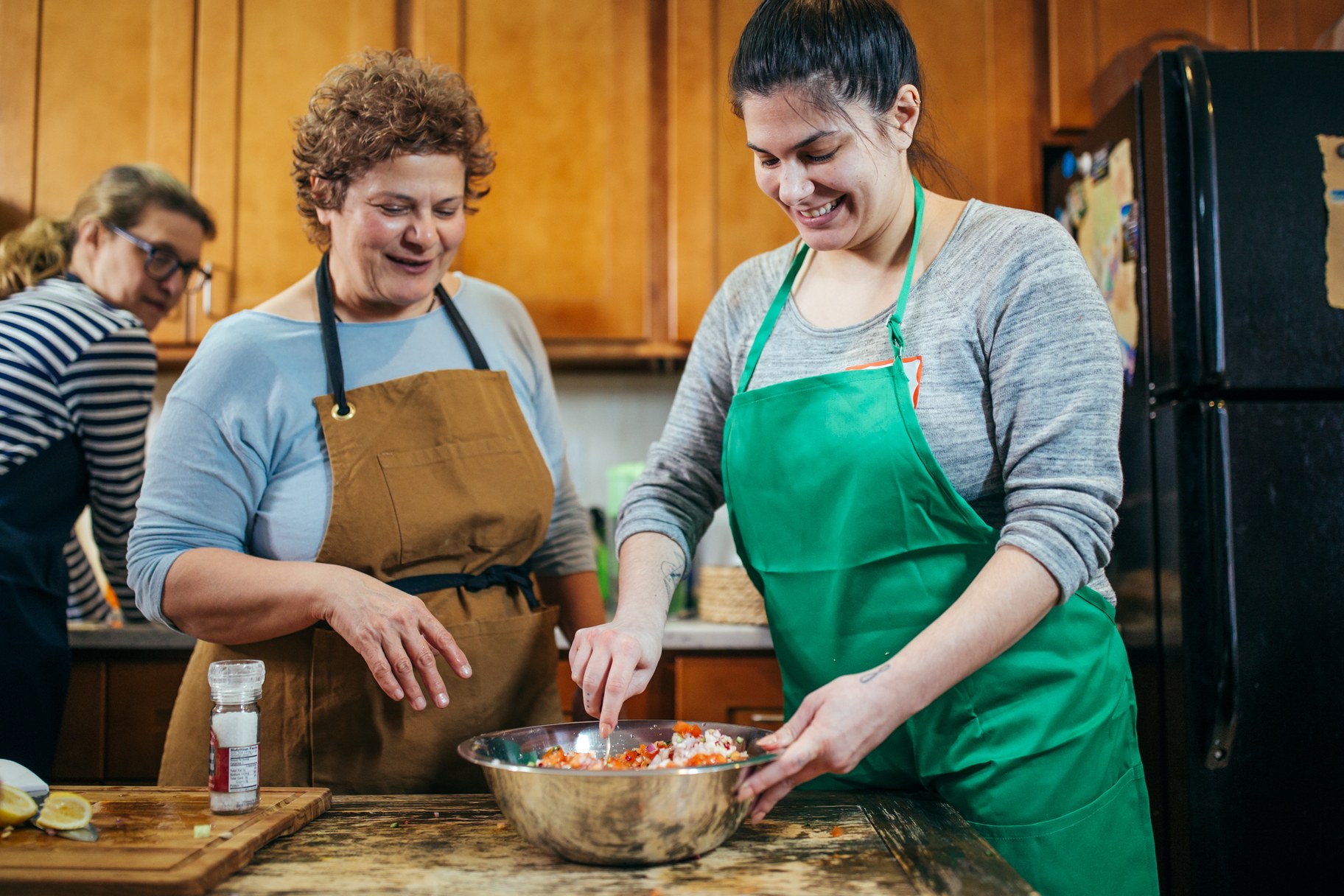 “Food is about creating things I cannot have here,” says Mab Abbasgholizadeh, a League of Kitchens instructor from Iran. Photo courtesy of BrakeThrough Media. 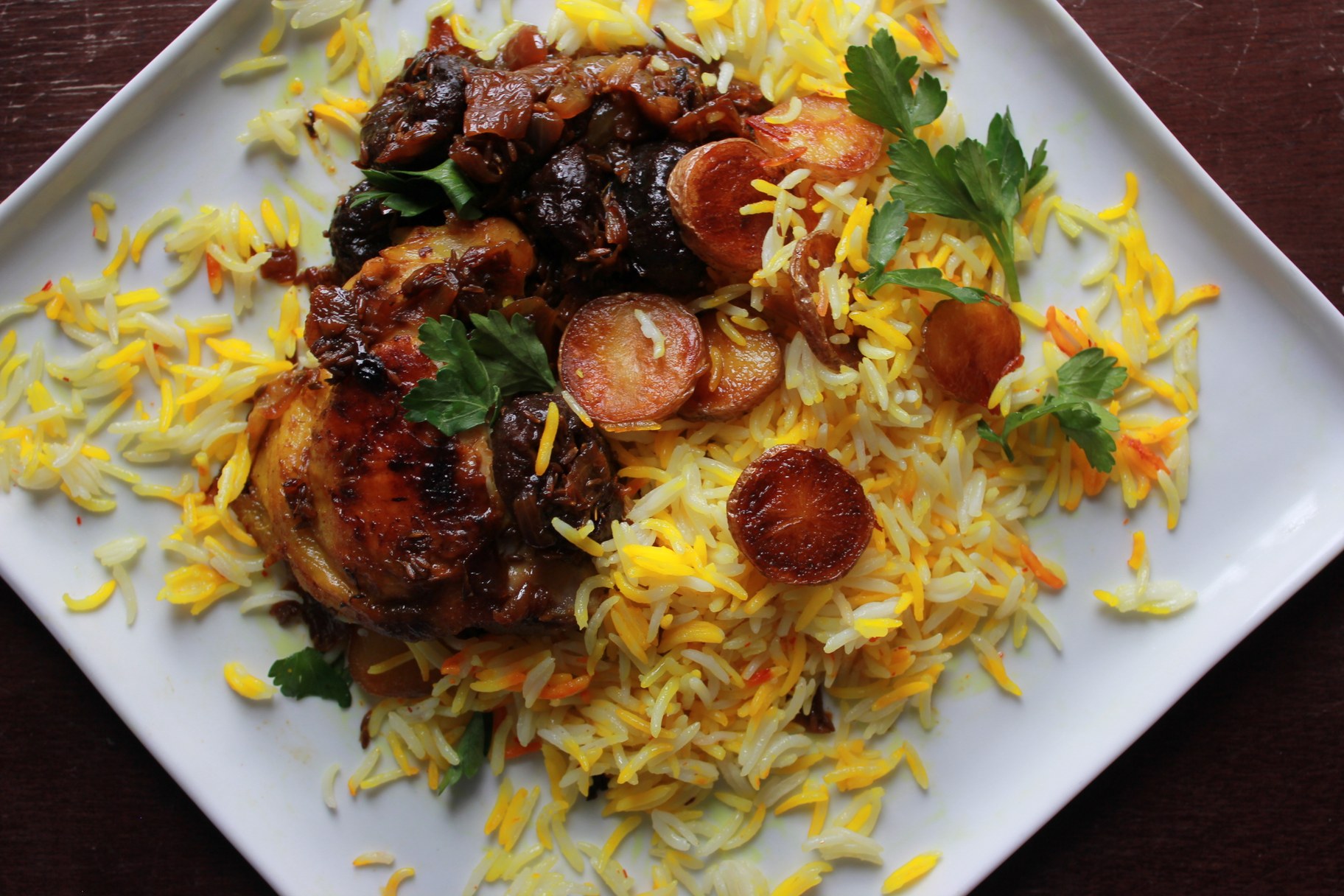