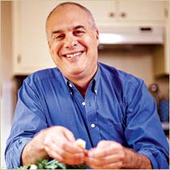 Best-selling cookbook author Mark BIttman is the creator and author of the popular New York Times weekly column, "The Minimalist," and one of the country's best-known and widely admired food writers. His flagship book, How to Cook Everything, is currently in its fourteenth printing and has, in its various formats, sold over a million copies.

Mark is also a regular guest on the “Today” show and NPR's “All Things Considered” and has also appeared on countless national and local radio and television shows. He has been profiled in this country's leading newspapers, including the Boston Globe, Washington Post, and Los Angeles Times.

In a large bowl combine flour, yeast and salt. Add 1 5/8 cups water, and stir until blended; dough will be shaggy and sticky. Cover bowl with plastic wrap. Let dough rest at least 12 hours, preferably about 18, at warm room temperature, about 70 degrees.

Dough is ready when its surface is dotted with bubbles. Lightly flour a work surface and place dough on it; sprinkle it with a little more flour and fold it over on itself once or twice. Cover loosely with plastic wrap and let rest about 15 minutes.

Using just enough flour to keep dough from sticking to work surface or to your fingers, gently and quickly shape dough into a ball. Generously coat a cotton towel (not terry cloth) with flour, wheat bran or cornmeal; put dough seam side down on towel and dust with more flour, bran or cornmeal. Cover with another cotton towel and let rise for about 2 hours. When it is ready, dough will be more than double in size and will not readily spring back when poked with a finger.

At least a half-hour before dough is ready, heat oven to 450 degrees. Put a 6- to 8-quart heavy covered pot (cast iron, enamel, Pyrex or ceramic) in oven as it heats. When dough is ready, carefully remove pot from oven. Slide your hand under towel and turn dough over into pot, seam side up; it may look like a mess, but that is O.K. Shake pan once or twice if dough is unevenly distributed; it will straighten out as it bakes. Cover with lid and bake 30 minutes, then remove lid and bake another 15 to 30 minutes, until loaf is beautifully browned. Cool on a rack.

WEIGHT VS. VOLUME - The original recipe contained volume measures, but for those who prefer to use weight, here are the measurements: 430 grams of flour, 345 grams of water, 1 gram of yeast and 8 grams of salt. With experience, many people will stop measuring altogether and add just enough water to make the dough almost too wet to handle.

SALT - Many people, me included, felt Mr. Lahey’s bread was not salty enough. Yes, you can use more salt and it won’t significantly affect the rising time. I’ve settled at just under a tablespoon.

YEAST - Instant yeast, called for in the recipe, is also called rapid-rise yeast. But you can use whatever yeast you like. Active dry yeast can be used without proofing (soaking it to make sure it’s active).

TIMING - About 18 hours is the preferred initial rising time. Some readers have cut this to as little as eight hours and reported little difference. I have not had much luck with shorter times, but I have gone nearly 24 hours without a problem. Room temperature will affect the rising time, and so will the temperature of the water you add (I start with tepid). Like many other people, I’m eager to see what effect warmer weather will have. But to those who have moved the rising dough around the room trying to find the 70-degree sweet spot: please stop. Any normal room temperature is fine. Just wait until you see bubbles and well-developed gluten — the long strands that cling to the sides of the bowl when you tilt it — before proceeding.

THE SECOND RISE - Mr. Lahey originally suggested one to two hours, but two to three is more like it, in my experience. (Ambient temperatures in the summer will probably knock this time down some.) Some readers almost entirely skipped this rise, shaping the dough after the first rise and letting it rest while the pot and oven preheat; this is worth trying, of course.

OTHER FLOURS - Up to 30 percent whole-grain flour works consistently and well, and 50 percent whole-wheat is also excellent. At least one reader used 100 percent whole-wheat and reported “great crust but somewhat inferior crumb,” which sounds promising. I’ve kept rye, which is delicious but notoriously impossible to get to rise, to about 20 percent. There is room to experiment.

FLAVORINGS -The best time to add caraway seeds, chopped olives, onions, cheese, walnuts, raisins or whatever other traditional bread flavorings you like is after you’ve mixed the dough. But it’s not the only time; you can fold in ingredients before the second rising.

OTHER SHAPES - Baguettes in fish steamers, rolls in muffin tins or classic loaves in loaf pans: if you can imagine it, and stay roughly within the pattern, it will work.

COVERING BETWEEN RISES - A Silpat mat under the dough is a clever idea (not mine). Plastic wrap can be used as a top layer in place of a second towel.

THE POT - The size matters, but not much. I have settled on a smaller pot than Mr. Lahey has, about three or four quarts. This produces a higher loaf, which many people prefer — again, me included. I’m using cast iron. Readers have reported success with just about every available material. Note that the lid handles on Le Creuset pots can only withstand temperatures up to 400 degrees. So avoid using them, or remove the handle first.

BAKING - You can increase the initial temperature to 500 degrees for more rapid browning, but be careful; I scorched a loaf containing whole-wheat flour by doing this. Yes, you can reduce the length of time the pot is covered to 20 minutes from 30, and then increase the time the loaf bakes uncovered. Most people have had a good experience baking for an additional 30 minutes once the pot is uncovered.
As these answers demonstrate, almost everything about Mr. Lahey’s bread is flexible, within limits. As we experiment, we will have failures. (Like the time I stopped adding flour because the phone rang, and didn’t realize it until 18 hours later. Even this, however, was reparable). This method is going to have people experimenting, and largely succeeding, until something better comes along. It may be quite a while.

Jennifer McCann is the author of a new cookbook called The Vegan Lunchbox , which is based on her award-winning blog, VeganLunchBox.com . In her cookbook, she provides...

Jon Gold is one of the most knowledgeable restaurant aficionados in town – and in Los Angeles, finding the right restaurant can make all the difference… whether you’re...

Laura Avery visits with Phil Green, who offers up fresh artichokes and asparagus from his stand at the Farmer’s Market. While both are available all year, the crops are...

Paul Bertolli is the founder and curemaster of Fra'Mani Handcrafted Salumi in Berkeley, California. His artisan salumi (the Italian word for salted, cured cuts of meat...

A rising star on the west coast culinary scene, Peter McNee – who possesses a Bachelor of Arts degree in Economics – honed his skills in some of the Bay Area’s top...

Best-selling cookbook author Mark BIttman is the creator and author of the popular New York Times weekly column, "The Minimalist," and one of the country's best-known and...

Dana Harris is the film editor for Variety, and author of The Knife – Variety’s food blog. She is perfectly suited for the job, having worn many hats over the years --...

In her latest cookbook, The Improvisational Cook , Sally Schneider offers advice on how to cook in a fun and spontaneous way, use the existing ingredients in your kitchen...