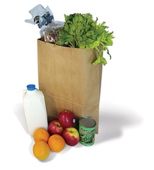 While preparing to write her book, Eating Between the Lines: The Supermarket Shopper's Guide to the Truth Behind Food Labels, author Kimberly Lord Stewart, her husband and her teenage son agreed to live on food rations for one week.  The food they received was from a non-profit food bank in her hometown of Denver, Colorado, which distributes food to 90 agencies.

The ground rules for the experiment included eating food bank provisions only, except for her son, who would eat the hot lunch that is part of an assistance program at his school.  Also, the family could not accept lunch or dinner invitations.

Kimberly was surprised at the food she received – they were given tuna, peanut butter and tofu dogs as a protein source; their bread was moldy and they received many sugary, stale pastries; old produce had to be separated from the fresher, more edible produce; and the oil she received for cooking could not be used because it was a butter-flavored oil used for popping popcorn.

Kimberly shares her family’s experience and challenges -- how they made the food last and what meals they prepared; and discusses some of the larger community issues related to hunger and social services.

Along with her book, Kimberly Lord Stewart is also editor-in-chief of Dining Out Magazine and regularly contributes to numerous publications such as Alternative Health, Better Nutrition, Eating Well and Vegetarian Times.

Kimberly’s experiences were with a Denver food bank and are not related to the non-profit organizations that provide food in Los Angeles.  A note about the L.A. Food Bank:  They inspect all of the food that is received -- all expiration dates are checked and they reject any food that is unacceptable.  Approximately 80% of the produce is useable and any produce that is unusable is discarded.

While preparing to write her book, Eating Between the Lines: The Supermarket Shopper's Guide to the Truth Behind Food Labels , author Kimberly Lord Stewart, her husband and...

Laura Avery talks to Tony Peltier of Ladybugs Forever about natural pest control. Worm casings are rich in nutrients and work as a natural repellent to white fly, aphids...

Jonathan Gold visits one of the most dependably delicious sushi restaurants in Los Angeles, Hiko Sushi. The restaurant has strict rules -- patrons must order a minimum of...

The recent pet food scare has shed light on both the human and pet food supply. Marion Nestle talks about food contamination: what’s happening and why it’s getting worse,...

“Wildman” Steven Brill is an expert at foraging for wild food in one of the most unlikely places: New York City’s Central Park. When arrested in 1986 for “destruction of...

If you are what you eat, then what about the animals we consume and their diet? Can it affect us? Nicolette Hahn Niman is an environmental lawyer and the wife of rancher...

While touring on the road, a common lament for band members is “I’m tired and I’m hungry and I can’t wait to go home.” When truck stops and roadside diners no longer fit...