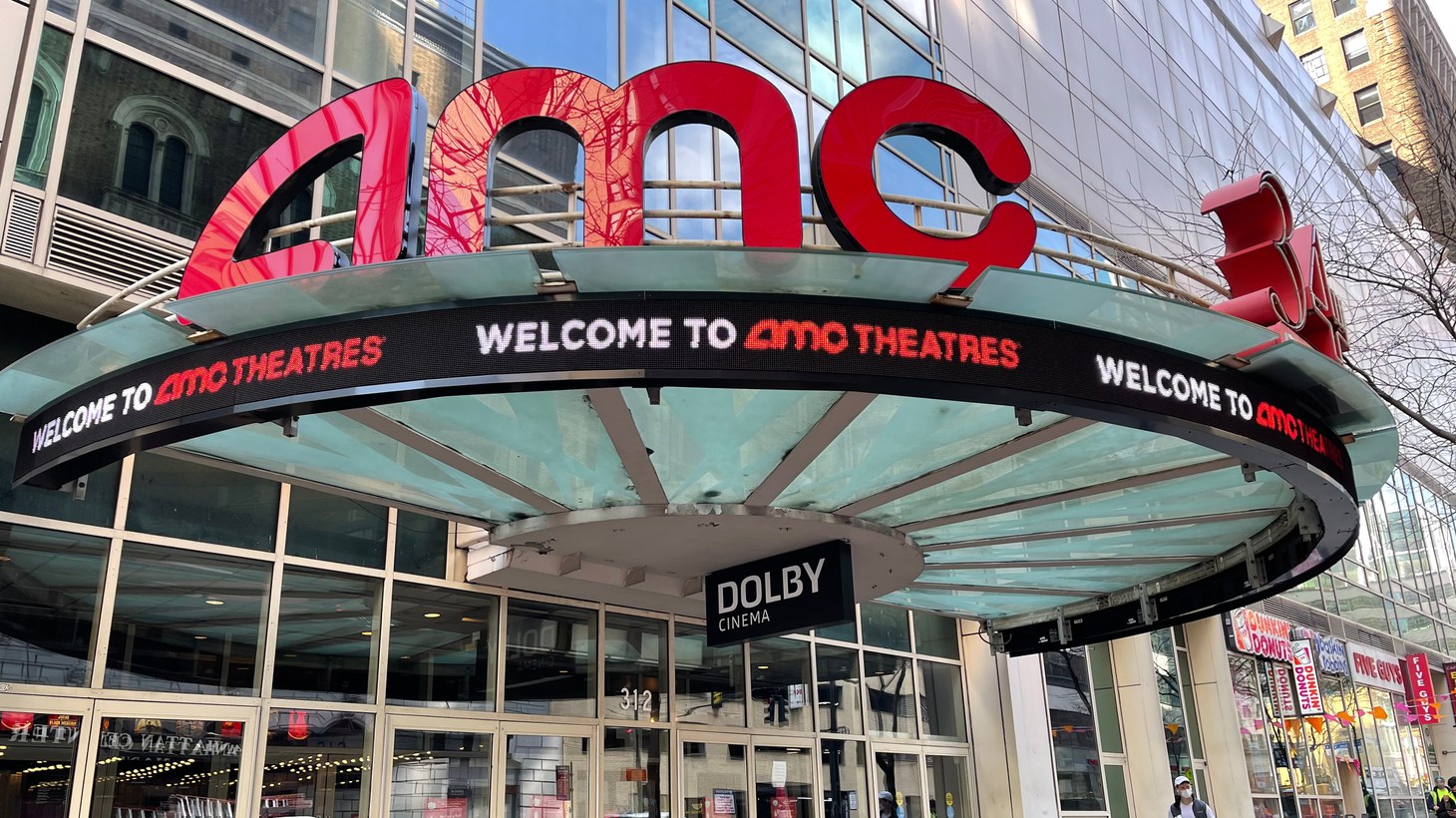 “Let's say the new normal is a 10% decline from pre pandemic, even that would put these theaters in a precarious place because they weren't doing fantastic before the pandemic,” says Matt Belloni. A closed AMC Movie Theater in Midtown Manhattan, on March 1, 2021. Photo by Xackery Irving/Shutterstock.

The movie theater business is still struggling due to the pandemic, and two titans in the industry have announced some drastic financial measures. In an attempt to raise some money, the world’s largest theater owner AMC Theaters issued a new stock, called “APE” shares, via dividend to their shareholders last week. At the same time, the owner of Regal Cinemas, the second largest, announced it’s contemplating bankruptcy. Guest host Matt Belloni analyzes the state of these theater chains with Lucas Shaw from Bloomberg.

Lucas: The theater chains basically didn't have a business for the first year and a half of the pandemic; They were either closed or operating at really limited capacity.

There was optimism that 2022 was when the business would come back in full force. And we've seen a few really bright spots [with] movies that did phenomenally well: “Top Gun Maverick,” “Doctor Strange in the Multiverse of Madness,” “Minions: the Rise of Gru,” and “Thor: Love and Thunder.” But the strong performance of a few movies at the very top has basically obscured that the business by no means is all the way back.

And that started to crush these chains, many of which, in the case of a Regal Cineworld, [it] was under a lot of debt already. AMC was too. Although [AMC] has managed to put itself on somewhat more secure footing, it's trying to raise this money because the one thing it has going for it is that stock is still reasonably high, [and] it became part of this crazy meme stock moment.

Movie studios and theaters are not aligned

Matt: This issue of product is really the challenge because for 70 to 80 years, the studios and the theaters were pretty much aligned. But what we've seen over the past five years is that the studios now have this incentive to make movies directly for their streaming services.

Even though consumers have shown that they are willing to come back to movie theaters in significant numbers, the product just isn't there. It's like 30% fewer movies.

“Is Hollywood shooting itself in the foot by starving these theaters to death?”

Lucas: It feels a little bit temporary. I think part of it is that the pandemic did delay the production and marketing campaigns for a lot of movies. That never-ending feeling of the pandemic meant that studios were unsure when these titles would be ready, they sold some off the companies like Netflix and Amazon, they pushed them back into 2023.

It also does feel like some of these media companies are starting to reconsider their streaming movie strategy. We've heard language from Warner Bros. Discovery. We've seen actions from Paramount and from Disney, where it seems like that period between when the movies in theaters and available on streaming is getting longer, [and] certain types of movies they now see as being for theaters and not just for streaming, because they're realizing they can make more money that way.

But there is a certain type of movie that studios just don't seem to think works for theaters anymore, and that could mean a somewhat permanent reduction in the number of movies that get a theatrical release.

Matt: If you look at the projections for next year, and the year after that, the theater will come back to a certain extent. But let's say the new normal is a 10% decline from pre pandemic, even that would put these theaters in a precarious place because they weren't doing fantastic before the pandemic.

If you look at a movie like “Prey,” in a pre-pandemic world, that would have been a nice little August release for Disney, where they put it out, it probably does $70, $80, maybe $100 million because it's better than people expected. That movie went directly to Hulu. And there are reasons for that.

This is the new normal

Matt: There are going to be these mid-to-lower market movies that would have done fine in theaters, but are now going to be for streaming. The overall level of product is likely not going to come back to what it was pre pandemic. And that's where the very tough decisions will have to be made.