The nation's electric grid is taxed year-round but especially in the summer months with triple-digit temperatures, violent storms and outages when users are relying on their air conditioners. This edition of BURN, an Energy Journal examines the state of America's electric power grid and the science needed to modernize it.

Host Alex Chadwick interviews Paul Stockton, former Assistant Secretary of Defense for Homeland Defense and America's Security Affairs (2009-2013), who was the government's point man for protecting the nation's electrical grid. The interview focuses on the threat of terrorism against the grid. He will also talk about disasters and lessons learned from Hurricane Sandy and how best to protect the grid during the next super storm.

Science reporter Ari Shapiro paints a portrait of the electric-grid army through the voice of one of an electric-power linemen — what his days are like when things are calm, what happens when disaster strikes, and what he thinks about the state of the grid. It's a window into the world of the pole-climbing folks in hard hats who, as they like to say, "provide light in a dark night."

Alex Chadwick will also explore the challenges when there's no grid at all, following the research of the Army's Rapid Equipping Force, which aims to incorporate new technologies to solve critical problems on the battlefield, like energy. He reports on an unlikely energy innovator, the US Army, which is preparing to deploy a radically redesigned combat outpost featuring a smart microgrid. A combat outpost (COP) is the basic military camp for about 100 soldiers. COPs need to function like small communities, with power, water, sanitation, food, etc. In Afghanistan and Iraq, supplying these units with fuel and water became the single greatest point of vulnerability — long supply caravans that had to be defended were a serious drain. The new COPs — developed by various military planners and funded by the Rapid Equipping Force — replace tents and generators with walled structures and smart grids. They cut fuel demand by at least 50% — meaning 50% fewer caravans, and a drop in casualties. 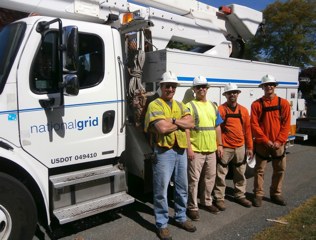 Linemen for the national grid