John Requa and Glenn Ficarra have managed to have a successful writing partnership for nearly 25 years with credits including Cats and Dogs and Bad Santa. But it was on their movie I Love You Phillip Morris -- a quirky, gay, prison love story starring Jim Carrey and Ewan McGregor -- where they first got to be in the director's chairs. Having made many quirky short films over the years the two had always wanted direct a feature and, despite that film's troubled release, it got them noticed for more than their writing. Steve Carrell, a producer on Crazy, Stupid, Love, chose them because of their ability to balance comedy and drama, something they'd done on I Love You Phillip Morris. Requa and Ficarra talk about how the difficulty marketing Crazy, Stupid, Love, which they call an "emotional comedy," casting Ryan Gosling and how they first met as pretentious film majors in art school.

The Moth story is told by actor John Grady. It takes us inside his experience working as a "creature" on the Will Smith sci-fi movie, I Am Legend. 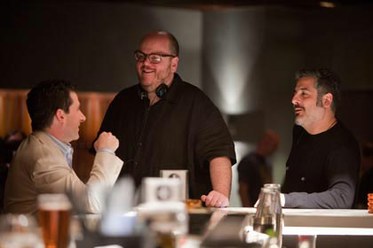