He may not be the biggest Hollywood name behind The Social Network, but without his relationship with author Ben Mezrich Hollywood may not have made this movie. Producer Dana Brunetti, who began 13 years ago as Kevin Spacey's assistant, is today his partner in Trigger Street Productions. A few years ago, they optioned a Mezrich book as the basis for the 21. When the film was released in 2008, Brunetti wanted to leverage its hype to pitch a new project, Mezrich's planned book about the founding of Facebook. But Mezrich hadn't begun writing and they didn't know the facts, so they set out to woo Facebook co-founder Eduardo Severin into telling them the story. Brunetti recalls the experience, explains his love of making movies based on Mezrich's books (which he calls "dick lit") and admits his own fascination with Facebook. 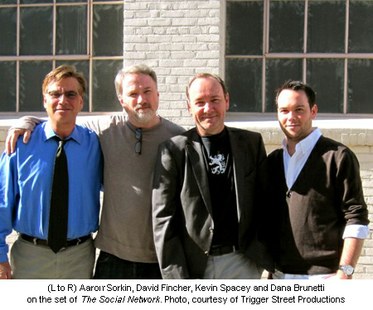