Someone once told visual artist Gary Baseman that you spend the first half of your life running away from home, and the second half of your life running towards it. It's certainly true for Baseman, whose retrospective, The Door is Always Open, incorporates furniture from the home he grew up in, in Los Angeles' Fairfax District. Baseman's characters are also based on the stories of his parents, who were both Holocaust survivors. His vision for the exhibit, which is at the Skirball Cultural Center through August 18th, was to create an art experience that was interactive and inviting to others. Guests can sit down on his parents old couch and watch his animated feature film, Teacher's Pet, or sit down at the living room table and play the Baseman-designed board game Cranium. In this revealing interview, Gary tells Elvis the story of his father that inspired his MOCATV video Buckingham Warrior, plus the unexpected challenge of making the Skirball exhibit "family friendly." 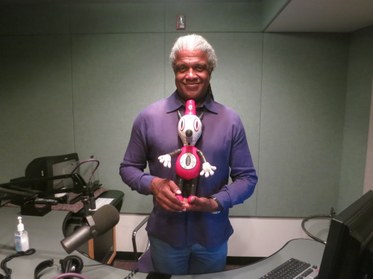