No Man's Lands: Quartets by Pinter and Walsh Before Harold Pinter passed away last December, the final production the playwright was involved with was a West End revival of his 1975 drama No Man's Land. Pinter was at the opening night of Rupert Goold's staging last fall, which was polished if not particularly probing. Michael Gambon starred in the role of Hirst, originated 33 years earlier by Ralph Richardson. Gambon was perfectly cast as the old British bull, yet for as strong a presence as Gambon was in London, his turn — and the production — ultimately didn't shed any new light on Pinter's enigmatic work.

This was on my mind as I watched the revival of No Man's Land currently running at the Odyssey Theatre in West LA, which features a performance that not only surpasses those seen in the West End, but one that unearths new richness in Pinter's last, great full-length play. Alan Mandell plays the role of Spooner with such grace, intelligence and cunning that he makes you wonder: was John Gielgud this good in the original 1975 production?

In a rumpled suit, white tube socks and sandals, Mandell reeks of a faded — or perhaps never attained — aristocratic grandeur. He speaks of lofty topics like poetry and Hungarian émigrés, but there is always the sense that he's on the make. The joy of Mandell's performance is in his eyes, which make the 81-year-old actor seem as curious and guileless as a child, even as he downs glass after glass of 18-year Glenmorangie. He makes Spooner seem not like a pawn in Pinter's linguistic chess match, but rather a fiercely alive vagabond who just happened to wander into the theater. 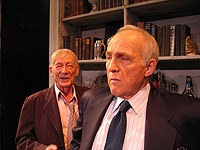 Unfortunately, the other three cast members on stage at the Odyssey are not up to Mandell's level. Lawrence Pressman is neither verbally nor physically convincing as Hirst and Jamie Donovan and John Sloan are capable but only slightly menacing as Hirst's handlers, Briggs and Foster. Michael Peretzian's staging is simple and effective — but mostly it works as a showcase for Mandell, who performed with Beckett in early productions of Waiting for Godot and Endgame. He's an actor who has no problem bringing vivid humanity to dense, absurdist works by Nobel-prize winning playwrights.

No Man's Land could also be the name of the undefined setting in Enda Walsh's latest play The New Electric Ballroom. The script calls for a “living room/kitchen space” in Ireland, but all you really need to know is that it's a place where three women reside. Two of the sisters conspire to keep their younger sister safe from the outside world — or in other words: men. The only male they interact with anymore is the loopy, local fishmonger, who's never invited in for tea despite his lingering efforts to chat after dropping off a tray of cod.

The fishmonger, Patsy, is played by Mikel Murfi, who directed Walsh's Walworth Farce (also seen last month at UCLA Live). Like that production, The New Electric Ballroom, comes from Druid Theatre of Galway after making its American Premiere at St. Ann's Warehouse in New York. I saw the production twice there — and were there world enough and time, I would go again this weekend during its brief run at the Freud Playhouse.

The performances by Catherine Walsh, Rosaleen Linehan and Ruth McCabe as the three sisters are top notch and Murfi is hauntingly daffy as Patsy. My only quibble is the staging, directed by the playwright himself, which is far less dynamic than Murfi's vision of The Walworth Farce. Perhaps that's inevitable with this claustrophobic work — luckily the playwright's language is never dulled by the production. Like The Walworth Farce, The New Electric Ballroom is not to be missed. Enda Walsh is the closest thing we have to a Beckett or Pinter in the theater today.

The New Electric Ballroom runs until Sunday at UCLA Live; No Man's Land continues at the Odyssey Theatre through December 19th.