In the beginning of the program we hear from pickup basketball players in Los Angeles about the rules of behavior, playing tough, having fun and getting old. We talked to players Jack Litewka, David Spates, Mike Costanza and some guys named Richard, John, and Casey.

Then, when Miguel Coleman was growing up, he spent his free time traveling around with his father playing pickup basketball. It was a vital part of an education where lessons of family, god and the keys to becoming a better man were all learned on the court. Documentary filmmaker Miguel Coleman, along with his father and player friends, returns to the Bay Area gym where he spent his boyhood. Produced by Christopher Johnson. 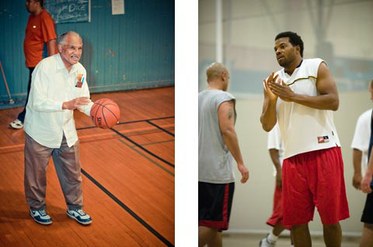 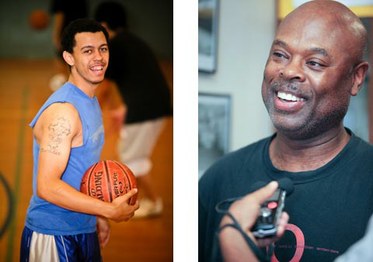 (L to R) Jeremy and Vince

Here are clips from Miguel Coleman's project documenting pickup basketball around the country: