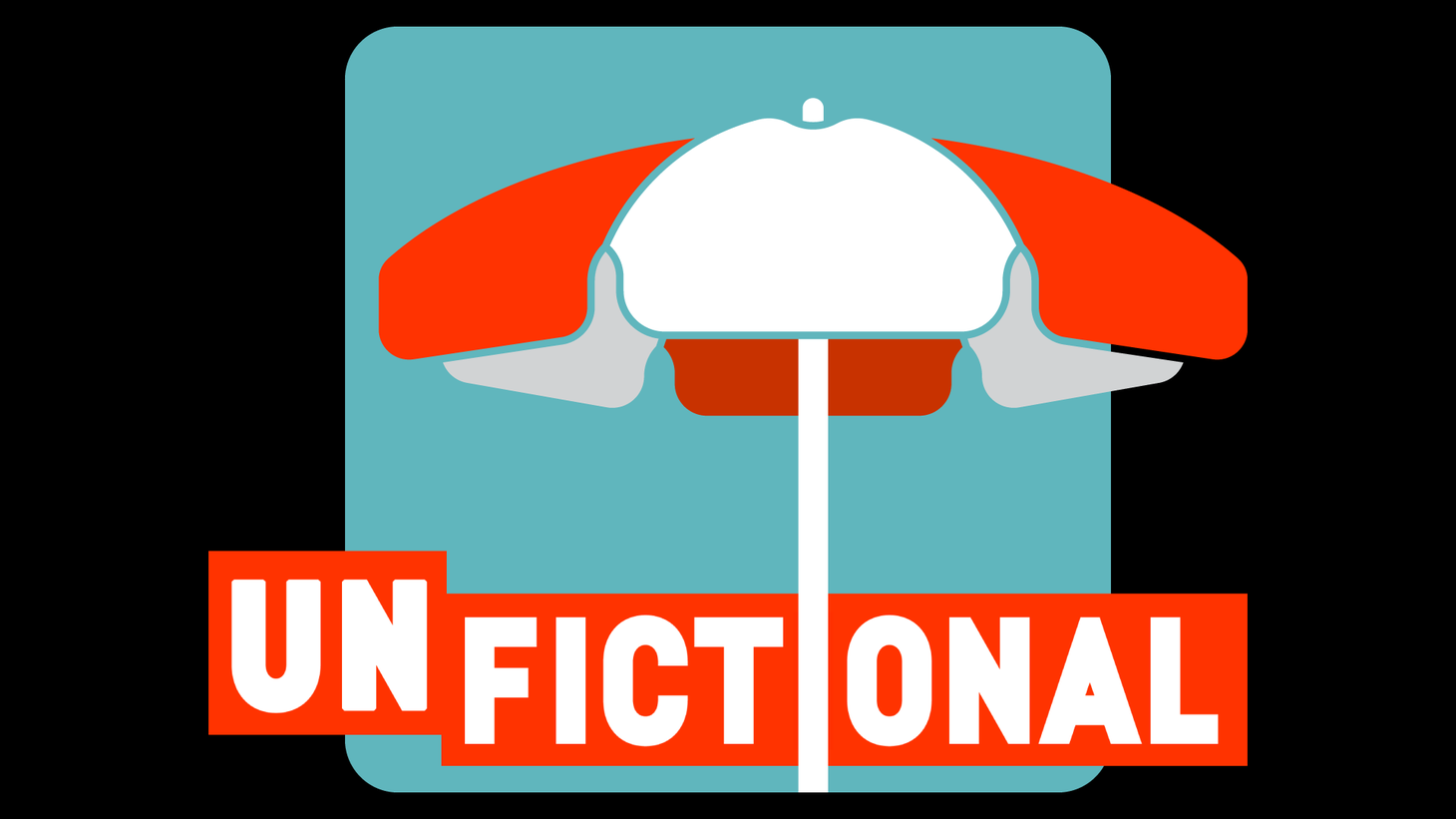 Street vendors are an essential part of Angeleno history and economy. One can vend with mobile carts and food trucks located on street corners, outside concerts or sports events. They sell everything from hot dogs, tacos, burritos, churros, fruit, t-shirts and souvenirs, to almost anything else.

Miguel Montoya sells micheladas – a refreshing Mexican drink made from a mix of beer, lime or tomato and clam juices, hot sauce, and a savory ingredient.

“It's another level of just drinking beer, 'cause there's a lot of people that like beer, but it's like they want a little something, more stuff, different flavor to it,” he explains. 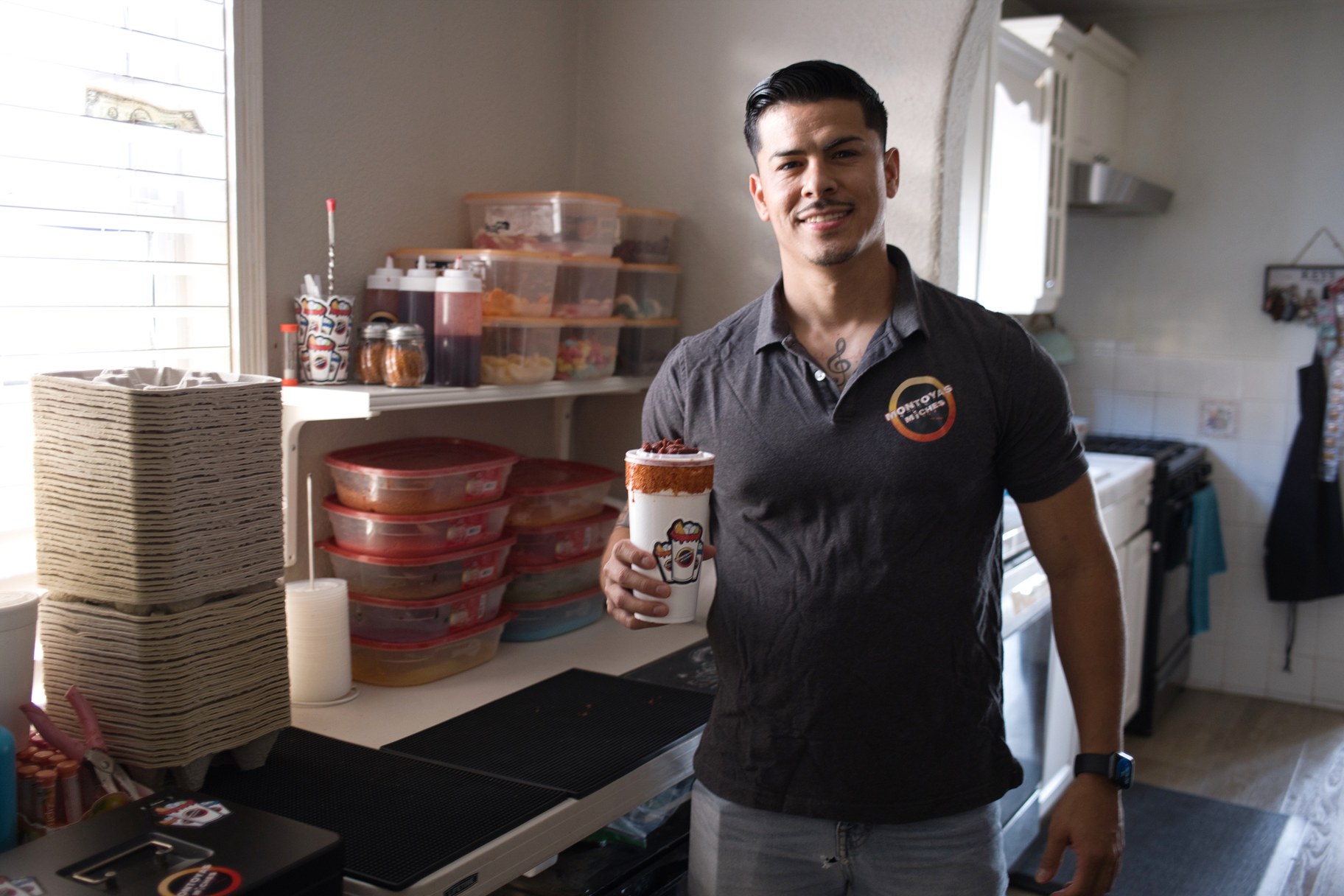 Miguel Montoya, of Montoya’s Miches, shows off one of his signature micheladas. Photo by Jaime Roque.

He prepares these drinks at parties, events from his car, and even sells them via Instagram.

Many of these entrepreneurs have become staples in their communities. Ice cream vendor Don Mario, aka Bigotes, has been selling outside two local elementary schools in East LA for at least 15 years. 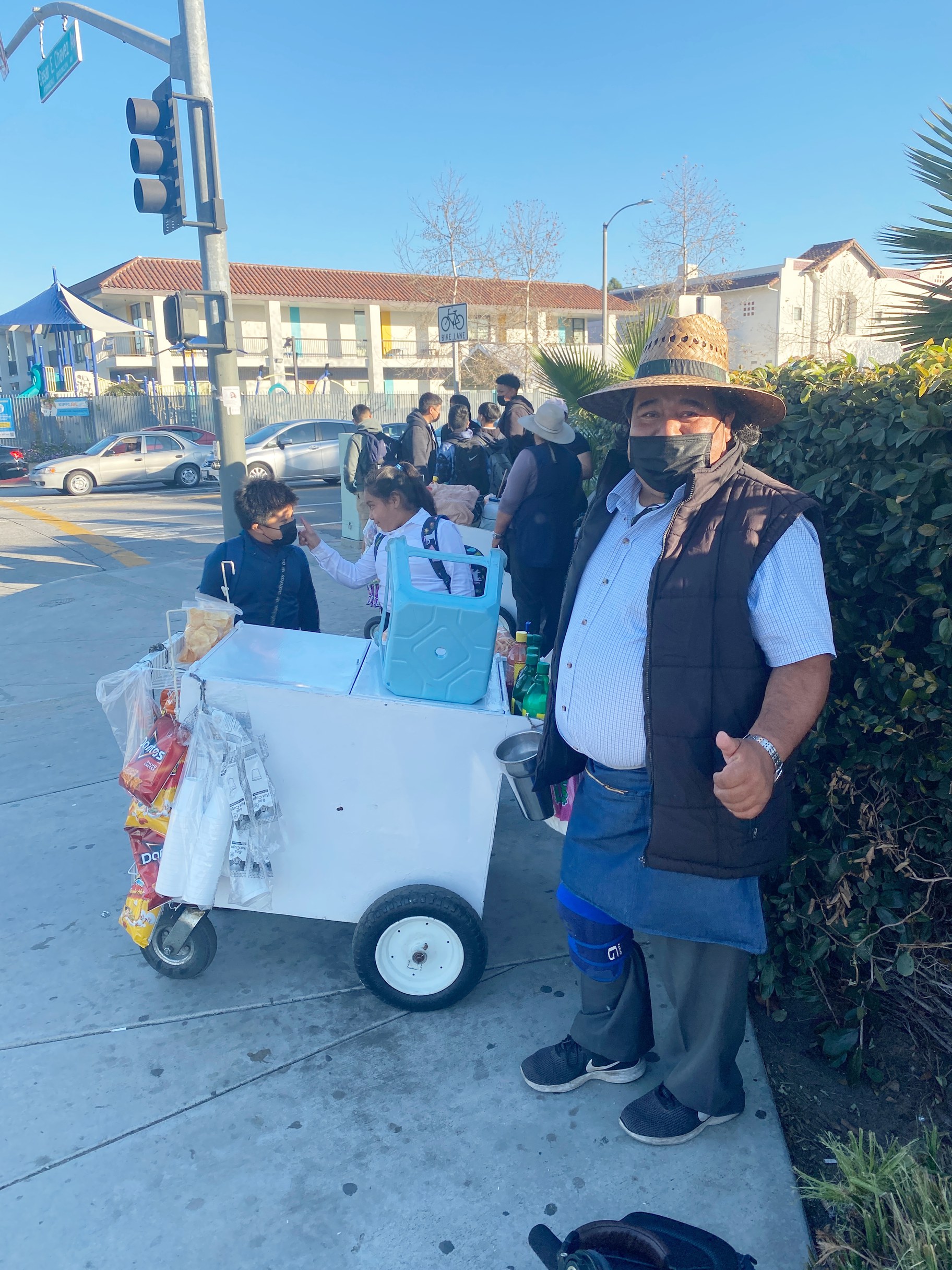 However, for decades, this activity was illegal. And though vending has been somewhat decriminalized since 2018 across the state, the lines of legal vs. illegal are not always clear. Some vendors still face daily crackdowns.

Besides the constant harassment and fear of raids, these independent business owners are also financially unprotected.

“One day of a loss of sale is a huge deal,” says Rudy Espinoza, the executive director of Inclusive Action, a nonprofit organization that advocates for vendors and provides them with low interest loans. “They're really vulnerable to any loss of income.”

Espinoza says he has heard many stories of street vendors who have not been able to make rent, pay their utility bills, or even feed their families since the pandemic started.

The pandemic also produced other drawbacks.

“People needed a way to hustle, you know, to make extra money, so a lot of [them] just started their own business,” says Montoya. “That's when I noticed that it was like the competition started growing.”

However, the City of Los Angeles has implemented many hurdles for the thousands of vendors already operating the city, including getting approved carts. In the end only a few vendors end up receiving permits.

Aiding in the process of approval is Richard Gomez, an engineer with Revolution Carts. He was called to work on carts that could meet the city and health department’s requirements. At the same time, he wanted to make them aesthetically pleasing, having elements of classical Americana in their designs. 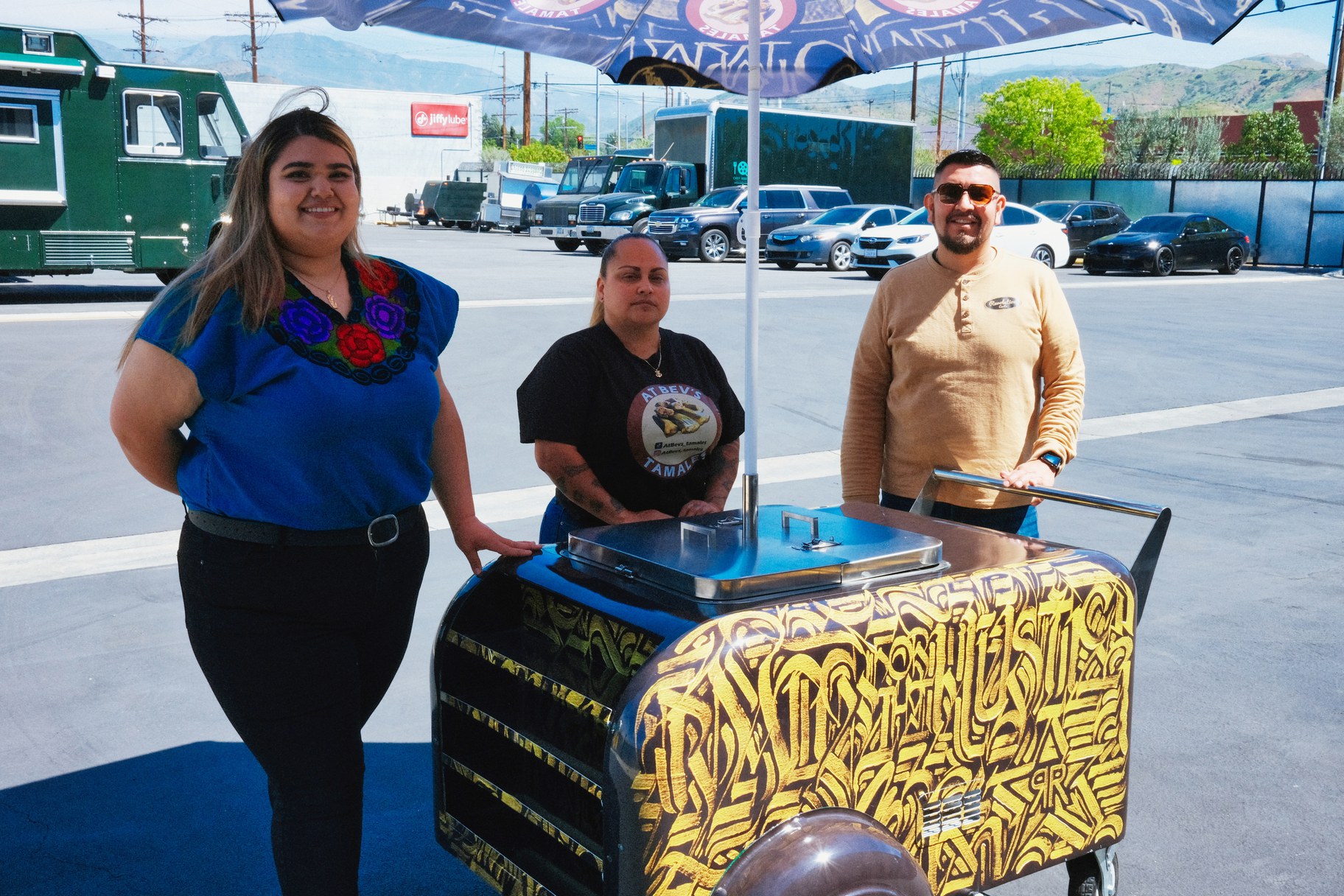 “There's a lot of features: the flares on the wheels, something that represents lowriders,” Gomez says.  “You see [lowriders] cruising down the streets and it just catches people's eyes, so I wanted the cart to be able to be part of that, to be able to attract people to the vendors, being intrigued by the cart.” 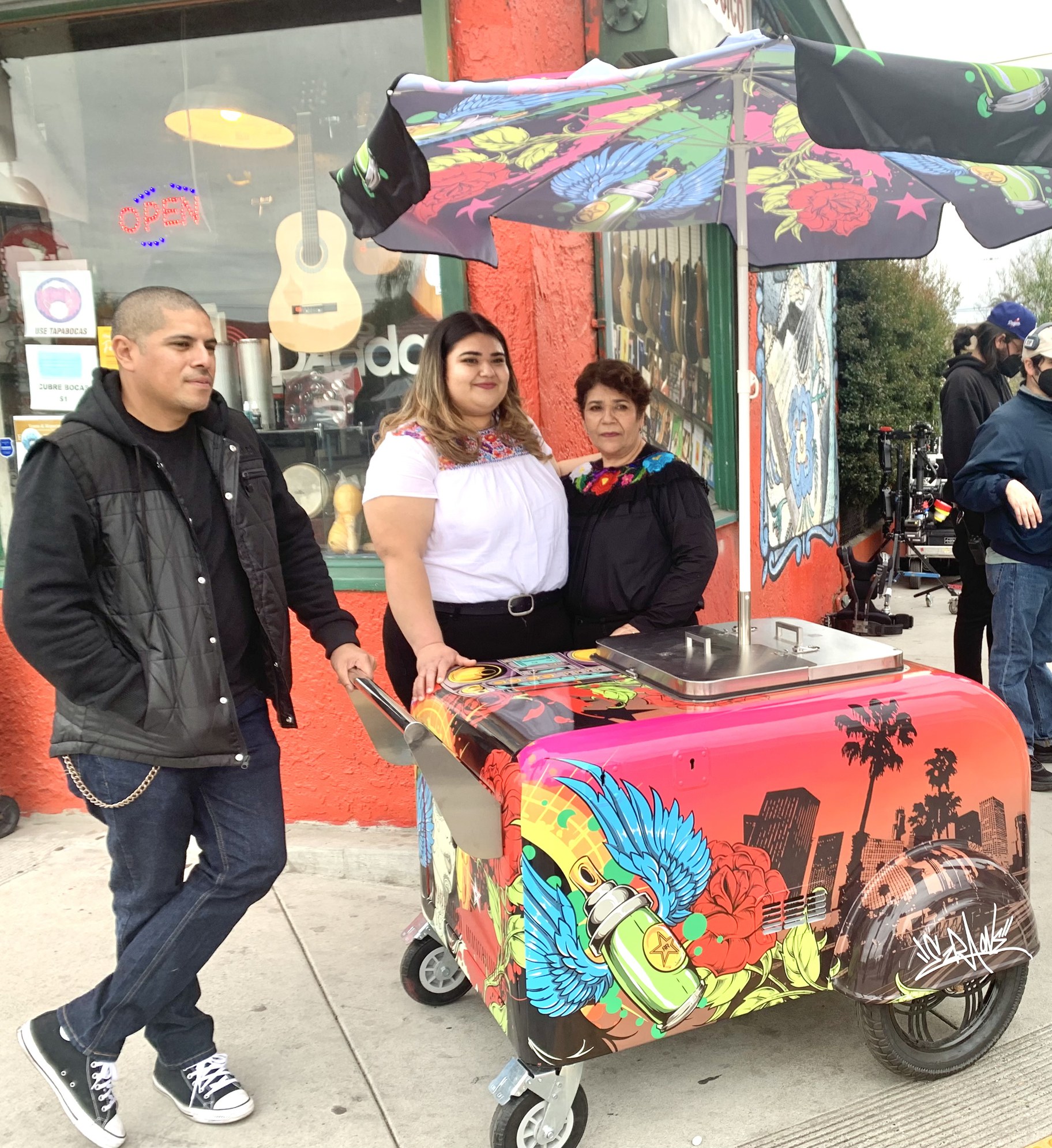 Vendors have started an association to work with the city to pass an ordinance that legitimizes their businesses.

Producer James Roque follows the stories of a few of these entrepreneurs, finding out why they started vending, the challenges they encounter on a daily basis, and how they fared during the last few years. 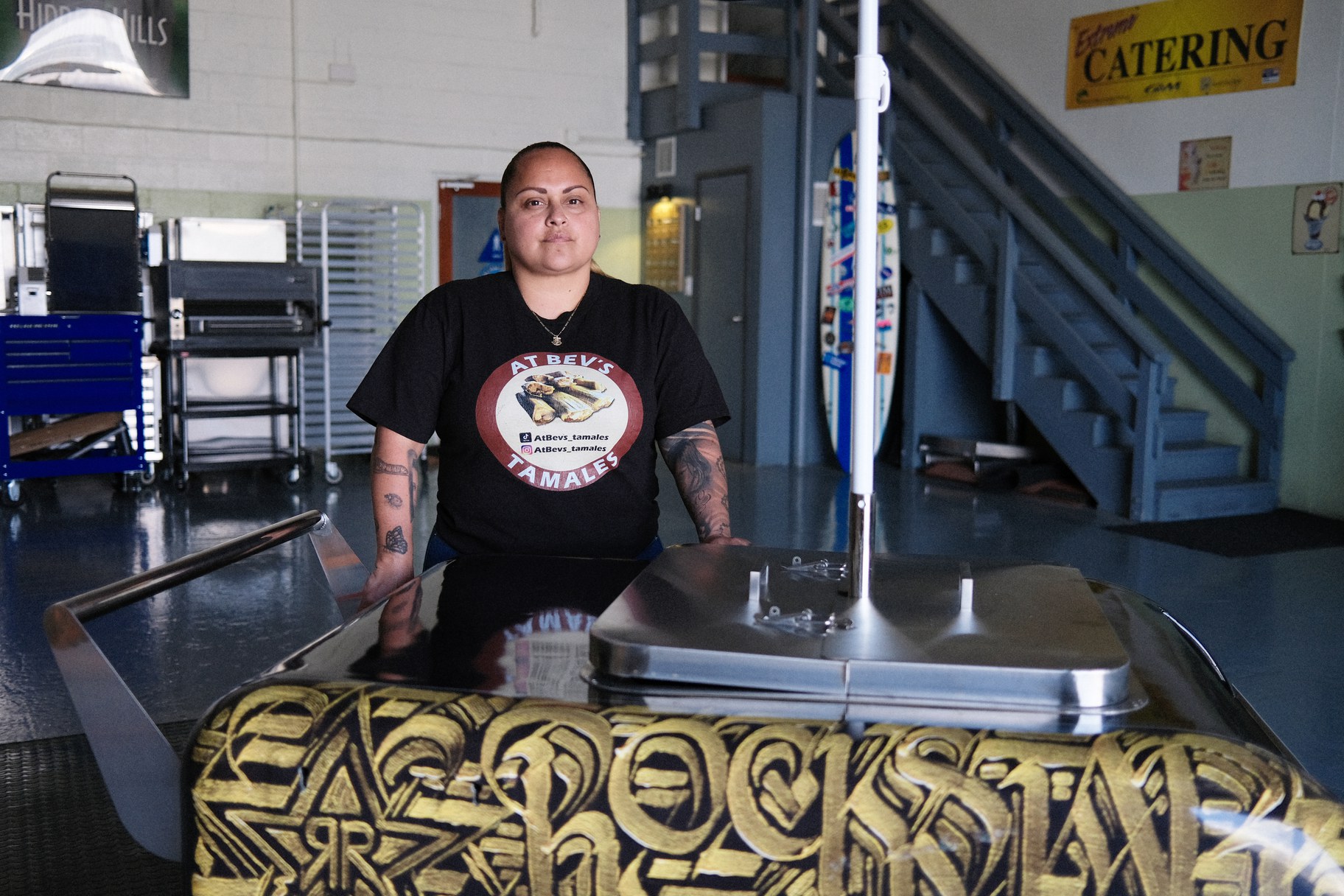 Beverly Estrada, of At Bev’s Tamales, stands by her Revolution Cart containing the word ‘hustle’ and designed by artist, DEFER. Photo by Jaime Roque.

*The quotes have been edited for clarity.

Translations and voice-overs  by Jaime Roque.

Special thanks to: Connie Alvarez and Gillian Ferguson