The God of Chaos What does an ancient African deity have to do with a Reese's peanut butter cup? Take a trippy, intimate and lyrical journey to meet Elegba, king of beginnings, master of doorways, and trickster spirit of chaos.

For at least the last half century, African Americans have been building Yoruba communities around the US. Christopher Johnson has been out visiting some of them, and recording individual stories of devotion, sacrifice, and the sense of homecoming many blacks find in this ancient African belief; older than Christianity, older than Islam, older than Buddhism. Learn more about Christopher's Orisha Project at http://orishaproject.tumblr.com.

At the heart of the religion is a vast pantheon of divine spirits, called the Orisha. This is Christopher's story about one of Yoruba's most important deities. 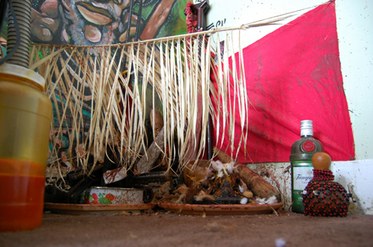 An Elegba shrine – covered in white feathers, and surrounded by gin and
orange palm oil - sits by the door at an Orisha temple in Oakland 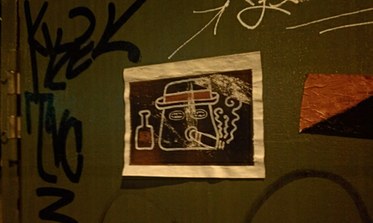 In Oakland, California, a local artist has put up hand-painted stickers of Elegba
at intersections around the city. The deity is shown with his cowry shell eyes
and his trademark fedora, tobacco, and a bottle of gin or rum.

Plus, Evan Kleiman knows the spirit of chaos from her years in restaurant kitchens. Evan is the host of KCRW's Good Food.

Banner image: An Oyotunji Elegba Shrine. Elegba guards a doorway at Oyotunji Village, a commune that has been in Sheldon, South Carolina since the 1970's. Black Americans modeled Oyotunji after a Nigerian village, and built it as a space to practice Yoruba and other African cultures.