War and the Warriors Our feature story, Double Jeopardy, is about small group of soldiers who find themselves barricaded in a house during the Vietnam War. No battle-hardened soldiers, they were support troops and a civilian engineer trying to set up a radio and TV station and they hadn't fired their weapons since basic training. Two of the men escaped in two different directions, and their choices affected the rest of their lives. Produced by Rich Halten.

Plus, two years ago, producer Jake Warga spent a month embedded with troops in the North of Iraq, and while he was there he asked what the soldiers had on their iPods. You can read about producer Jake Warga's experiences in Iraq at Transom. 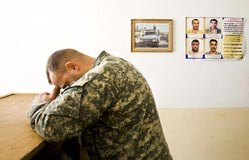 Finally, when writer Evan Wright appeared on KCRW's online Guest DJ  Project a while ago, he brought along a song he discovered while in Iraq with the Marines. It's a satirical rap of military life performed by one of the soldiers.