A Life in Music

Tom Schnabel in the KCRW library and studio circa mid-80's

I count myself extremely fortunate to have made a living—and a life—in music. It was at times a precarious career, but I have been very very lucky. I worked at several record companies both before I joined KCRW in 1977 as well as after I left the Music Director and Morning Becomes Eclectic host position in 1990. Being a radio DJ has always been my favorite job though. The gestalt of putting on a record and sharing it with whomever was listening out there in the audience was simply wonderful. The station’s signal barely reached Robertson Blvd. when I first started in April 1977, but somebody told me at the time that if I had one person listening, that was enough. I called my first show, “View from the Bridge,” a title taken from a Sonny Rollins album.

I will retire from writing a weekly column for KCRW at the end of 2020, after 43 years at the station—36 years on the air and seven years online. I will transition to contributing on an occasional basis, when called upon by Anne Litt and others. I am looking forward to a break from regular responsibilities after all these years. It has been an amazing journey watching KCRW rise from a tiny FM station to become the powerful influencer it is today. I am proud to have been part of that growth, and it has been a privilege to share my love of music with you all over these decades.

For this week and next, I have prepared two monster playlists of music that I have loved over the years. They reflect my musical journey, painting a portrait of the music that has shaped my life and career in music. As you might expect, it is pretty eclectic. You’ll hear my love for not just jazz, but also the richness of classical music, which for me started with Laurindo Almeida and continued on with music of Debussy and Ravel. Also, I am happy to have been a promoter of what became known as world music, another rich trove of exciting sounds.

I first got into music as a young kid because my older brother Larry loved rhythm and blues, and he brought home a lot of 45 rpm singles. I also loved listening to KGFJ-AM, an R&B station that played nothing but R&B and what were known then as “race records.” Johnny Otis had a show there as well on television, where I heard Marie Adams & The Three Tons of Joy, Esther Phillips, and the Johnny Otis orchestra.

I heard Little Richard’s “Tutti Frutti” when I was eight, and it galvanized me. Whenever our parents were out for the evening, my older brother, twin sister, and I would fire up the big Magnavox tube console in the rumpus room and turn the volume up to 3 o’clock. We danced and went crazy. I still feel a jolt of electricity when I hear this song. I also loved Fats Domino, Chuck Berry, the Platters, the Flamingos, and other doo-wop groups. I owned a little 45 rpm turntable for 7” singles that was hooked up to my radio. Somehow these early experiences hard-wired me for a life in music.

Later in high school, I discovered jazz from listening to KBCA, 105.1 FM—artists like John Coltrane, Eric Dolphy, Oliver Nelson, Eddie Harris, and others. The Allegro Music Shop in lily-white Pacific Palisades didn’t carry a good selection of jazz albums, so I and others in my surf club would cage a ride from a licensed driver and head for Wallach’s Music City at Sunset and Vine in Hollywood. They kept demo records that we could sample before buying anything. We would then head to Adams Boulevard and buy the albums a little cheaper at Sam’s and Crane’s record shops. It cost a dollar more for stereo, but I didn’t have any extra coin. I still have the $3.98 mono vinyl from those days.

Going into the city to buy jazz records, I sometimes encountered sharply dressed young African American men handing out newspapers on Santa Barbara Avenue, now MLK Boulevard. It was Muhammad Speaks. This was during the civil rights era, and I needed to know more. I read the Autobiography of Malcolm X. I decided to subscribe to the paper, but didn’t want them to know how white my neighborhood was so I used the fictitious name Shabazz House. My mother picked up the first copy in the mailbox and was pretty weirded out. I had some explaining to do.

My first musical epiphany happened in my bedroom in the Schnabel home in Pacific Palisades, listening to Coltrane’s “India” from the Impressions album. I’m positive I had an out-of-body experience at the age of 16. I didn’t drink or smoke or anything, but realized the power of music because of this transfixing experience.

Throughout high school, undergrad, and grad school, I always bought as many records as I could afford. I worked at Vogue Records in Westwood while in grad school at UCLA. What a great store. I also shopped at all the record stores for both new and used vinyl—Music Odyssey, The Wherehouse, Platterpuss, Licorice Pizza, to name a few of my haunts.

I heard John Coltrane’s masterpiece "A Love Supreme" while driving a borrowed Porsche 356 to grad night in December 1965. On my way to USC for undergrad classes, I’d take the newly-completed I-10 down to Hoover St., listening to Jammin’ Jai Rich on KBCA weekday mornings. His fill music was Coltrane’s “Spiritual” from the live album At the Village Vanguard. I listened to all the DJs and they became my heroes—Jai, Rick Holmes, Tolly Strode, Tommy Bee, Kogyo Sayama. Little did I expect that I would one day hit the airwaves myself.

This is how my journey in music all started. I hope you enjoy this week’s uber playlist and that you might find it a nice break from the endless Christmas music on at this time of the year. Next week, more of my all-time favorite music. 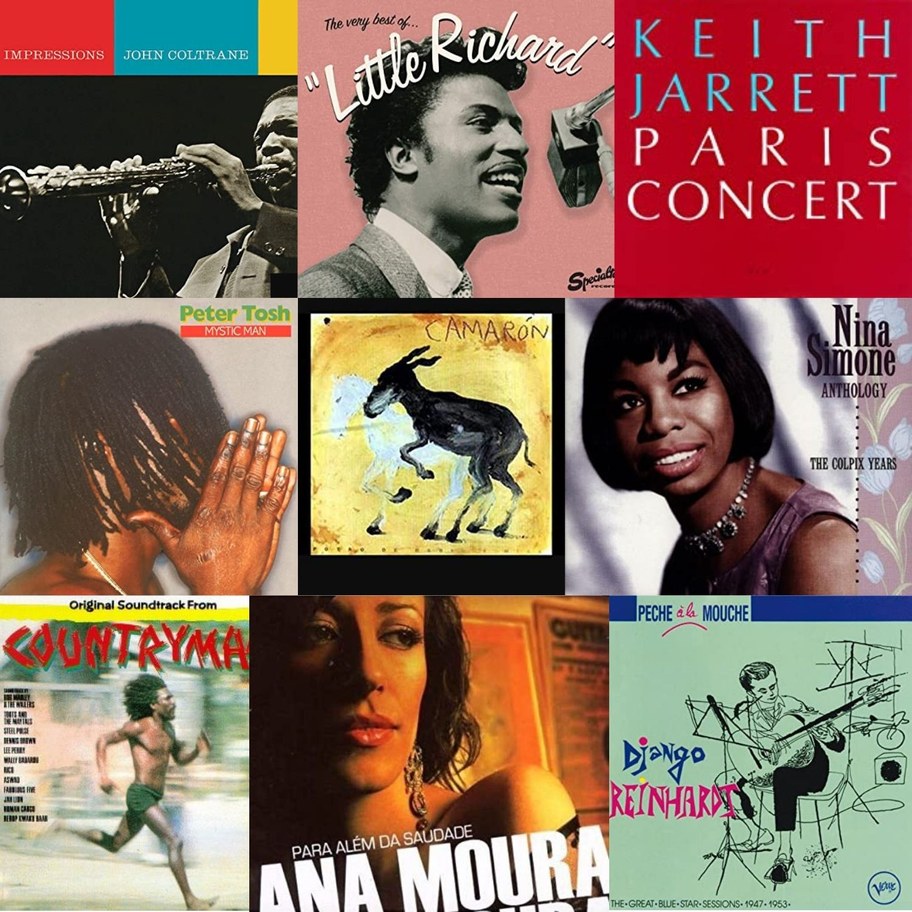