An album about the heart — 'Night Kisses: A Tribute to Ivan Lins'

When I first listened to Eddie Daniels’s forthcoming new album Night Kisses: A Tribute to Ivan Lins, I felt like the stars had aligned with the synergy of two musicians I greatly admire. The Brazilian singer/songwriter Ivan Lins is a familiar face who frequently visited KCRW, often when he had a date at the Hollywood Bowl along with Leila Pinheiro and Oscar Castro-Neves. I played his music on air regularly. As for Eddie Daniels, I’ve been following the gifted jazz multi-instrumentalist ever since I bought A Flower for All Seasons, his remarkable duet record with the late guitarist Bucky Pizzarelli. Daniels performed standards like “Emily” as well as Jacques Ibert’s difficult piece “Entr’acte” (Intermission).

Now in his 70’s, Daniels is the consummate reedman—a great tenor player, and a clarinet and flute virtuoso. He most often records music for clarinet, though his tenor playing and improv are superb. Happily, Daniels also plays flute on Night Kisses, something his fans haven’t heard much of. Flute is a staple ingredient of much Brazilian music, so I’m actually glad that ill-timed dental work just prior to the recording sessions meant that Daniels had to turn to an instrument he hadn’t recorded with in 30 years! 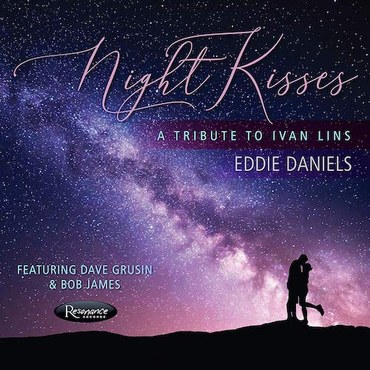 The concept for Night Kisses: A Tribute to Ivan Lins is the brainchild of Resonance Records co-president George Klabin, who produced the album and hand-picked the tracks from Lins’s recordings dating back to the late 70s/early 80s. Daniels tackles 12 Lins classics, including “Lembra” (Remember), “Depois dos Temporais” (After the Storms), and “A Noite” (The Night). The latter song is a poignant metaphor about the brutal dictatorship in Brazil. I particularly like the new version of “Velas Içadas” (Hoisted Sails), a song that compares the heart to a sailboat on life’s voyage, as well as ‘Quadras de Roda: O Passarinho Cantou” (Children’s Folk Dance). The album’s thirteenth track “Ivante” (named for Lins) is an original composition by Bob James. Daniels is joined by bassist Kevin Axt, drummer Mauricio Zottarelli, plus pianists/arrangers Josh Nelson, Dave Grusin and Bob James, with additional arrangements by Kuno Schmid. Their arrangements and strings by The Harlem Quartet make these songs even more special.

Ivan Lins is known as one of Brazil’s most melodic singer-songwriters. Lyricist-poet Vitor Martins provided the perfect complement to Lins’s songs with his lyrics. Their partnership reminds me of other great songwriter-lyricists who make Brazilian music sublime: João Bosco with Aldir Blanc, Milton Nascimento with Fernando Brant, Dori Caymmi with Paulo César Pinheiro. Though less-known up north in these parts, these pairs are all on par with more familiar figures like Rodgers and Hart or George and Ira Gershwin.

In the liner notes, Daniels described his initial apprehension of working with Lins’s songs. “As a singer, [Lins] kills me. When I first listened I was getting overwhelmed, thinking what the hell am I going to do with this? I thought, if I’m the lead instrument on an Ivan Lins album I have to become the singer. I want to be pristine as an instrumentalist; it’s very important to me to play my instrument with a kind of perfection. Now here was this music where you just have to be soulful and hearfelt.” Daniels further reflects that, “This album…it’s all about the heart…. When I hear it, it has a great calming effect…a way to get to our hearts and block out the noise of the world.”

Lins has high praise for the album, saying, “The album is fantastic. Totally surprising. Not only the repertoire, because there are songs that nobody recorded besides me, but the textures, the timbres, the ideas of the arrangements, the instruments used. It’s incredible.” I agree–Daniels and Lins are musical soulmates. Thanks to producer George Klabin for finally bringing them together. The result is magical and serendipitous.

Night Kisses is the second in a series by Klabin/Daniels in tribute to iconic Brazilian composers. The informative liner notes include descriptions of each track from Lins and/or Daniels, lyrics in English, as well as an Ivan Lins interview with James Gavin, who authored award-winning biographies of Chet Baker, Lena Horne, and Peggy Lee. I loved the first album of the series that honored the music of Egberto Gismonti, and look forward to the next one featuring the music of Milton Nascimento. Night Kisses will be released on August 7 and is available for pre-order now. Here’s a teaser in the meantime: