“As the pandemic took hold, a lot of the things that I intended only for myself took on this larger meaning that I hadn't really anticipated,” singer-songwriter Cassandra Violet says of her debut album. Photo by Anna Azarov.

For years, LA native Cassandra Violet separated her dual identities as a high school teacher and a singer-songwriter.

“It was kind of like Hannah Montana,” Violet tells KCRW, with a chuckle. “I did that sort of by design, because music was really an outlet for me. And it still is. But I think now I'm letting the line blur a little bit, because I feel like you make music from your experience. And everything is a factor into that.”

During the pandemic, Violet found it increasingly difficult to cleave her experience teaching 11th grade English and theater at Roosevelt High School in Boyle Heights from the personal themes explored on her debut indie folk album, “Maybe It’s Not Too Late,” which bowed April 2.

“I teach in a community that's been super hard hit by the pandemic,” Violet says. “Their resilience in this time of darkness has been a huge inspiration to me.”

“Maybe It’s Not Too Late” is a standout rumination on finding light in darkness, confronting notions of self-perception and navigating a world laid bare by the intimacy and isolation of the pandemic. A classically trained clarinet player, Violet brings her musicianship to instruments across the album (assisted by production from M83’s Joe Berry), though her voice may be the most formidable among them. Her raw, mellifluous range is akin to Joni Mitchell, while girded by a soul-inflected richness that allows Violet to explore genres from unadorned folk to country pop. Together, it amounts to a style all Violet’s own.

KCRW caught up with the artist to discuss the challenges of teaching and recording during the pandemic, the evolution of her songwriting, and how her students and even Britney Spears shaped the album.

KCRW: You began working on the album before the pandemic hit. How did it evolve as the world changed around you?

Cassandra Violet: “Before the pandemic, it was something that was really only about me. It was really hyper focused on how I saw the world and my anxiety. And a lot of it is still about that, my anxiety and the pressures put on women. That was a through line, but as the pandemic took hold, a lot of the things that I intended only for myself took on this larger meaning that I hadn't really anticipated.

There were a lot of things that I wrote with a tinge of darkness that became more hopeful and lively during the pandemic, because I found a lot more of the sides of joy in the music. There's a lot of darkness in the record, but it started to turn a little bit halfway through and it became more expansive and hopeful.”

What role did your relationship with your students and classes play in how the record took shape?

“I teach in a community that's been super hard hit by the pandemic. Their resilience in this time of darkness has been a huge inspiration to me, just in talking about finding the light in the darkness. My students are the most resilient people I've ever met. They're so incredible. That has deeply inspired me in this album as well.

For more than a year, we've been on Zoom. And it's been monumentally difficult to go to class, to stay engaged, to even just send a message to your teacher. I have so many students who have been directly hit by the pandemic, with their family members, and who have suffered a loss. Just the fact that they continued to show up on Zoom every day and be present and persevere through technological difficulties. They always come back. Their determination and strength to get through this insanely difficult time is stunning. It’s remarkable to me.”

As you reflected on what you were feeling in this time, what other influences or feelings ended up shaping the outcome of some of these songs?

I have a whole song on the album that is about Britney Spears, and it ties into what I was talking about with the expectations upon women. She was consumed by the world and the media, and then chewed up and spit out. No one really thought about her humanity. When I was in high school, I was very observant about the pop trends at the time. And I think that they had this darkness that became obvious a little bit later. I've always been very fascinated by pop music, not necessarily in my own sound, but what that looks like,  and what are the consequences of pop superstardom on a human.” 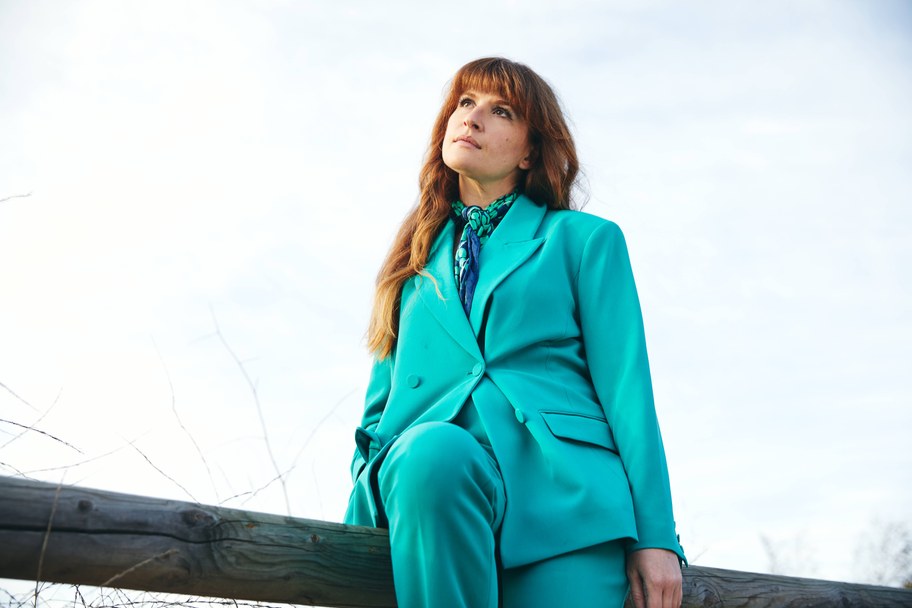 “I've always been very fascinated by pop music, not necessarily in my own sound, but what that looks like,  and what are the consequences of pop superstardom on a human,” Cassandra Violet says. Photo by Anna Azarov.

Teaching and recording music are highly in-person experiences that have been disrupted by the social distancing imposed by the pandemic. How have you navigated or overcome that?

“I try my absolute best to be the most engaging and positive presence I could possibly be, because it's already so difficult to get on your computer and go on Zoom all day. And it’s the same with my band of musicians I work with.

I recorded a lot in my closet, and Joe recorded in his recording studio. Everyone recorded separately and we then mishmashed it all together. So a lot of the additional parts, like the bells, strings, and woodwinds, all of that came from everyone having to stay shut in. So there were a lot of parts that were added that were not recorded live because of the pandemic, and I think it made the album a lot more rich and layered.

There's so much nuance that gets lost when you're not in person with people, or just little side conversations. Especially with students, that’s such an important way to connect on Zoom it feels so formal. I maybe overcompensate because of that loss of connection. But it's super difficult to overcome it. It can be pretty draining sometimes. But I think we're doing our best.”

It seems like those experiences are both more intimate and less intimate at the same time because of the circumstances. Can you talk about a song that changed or was directly impacted by that?

“‘Swim Test’ started out as a song about my dad and how he can’t swim, and how he faked a swim test to get into college. It was about how if you can do that, you can do anything. And that took on a new context in the pandemic. The lyrics are ‘Keep you head above water, you’re alive, and you’re kicking.’

There were so many times this year when things just became so overwhelming, and there was so much darkness everywhere. You just cry sometimes. It’s really hard and scary. So that song became encouraging, like a hopeful anthem. Now it’s all right. I’m still here.”

The song “Tick Tick” also feels like it has a multitude of meaning in this new context. Tell us about that one.

“‘Tick Tick’ is about my own anxiety about my biological clock, but also about the pressure on women generally. And I think that has become really even more so in the pandemic. I think for a lot of women, this time has pressurized notions of career and wanting to settle down into a diamond. There are just so many features of that that became more present during the pandemic. It exposed a lot of inequity that was already present, and exacerbated a lot of the pressures that fall to society on women as well.

I feel and felt that very acutely. For me, specifically, I've always felt the push and pull between independence and domesticity. Which is why the album cover is of me holding a pie with a sash that says ‘wifey material.’ I love all of these things about a domestic life, but I've also often felt trapped. And I think that there's this weird push-pull from the duality that exists within me and anyone in society right now, which is that you want to be free.”