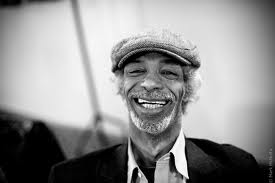 When I first interviewed Gil Scott-Heron on Morning Becomes Eclectic, it was December 9, 1980.  Gil was in town to open at the Forum for Stevie Wonder.  John Lennon had been murdered in New York City the night before Gil came to visit KCRW.  My first question to him was about John.  This is what Gil said:

“Oh yeah, we were talking about that, me and the band and crew, we were just getting off the stage last night in Oakland on the Stevie Wonder tour, and we found out he’d been shot and killed. I can’t describe the overall atmosphere except to say that all 80 of us on the tour were in shock.  At least half of the crew is from the UK or Scotland.  The sound and light people are from the big company Brittania Row. which does shows like Pink Floyd and other big British groups.  There were a lot of John’s countrymen with us, also a lot of Africans who are travelling with us, and lot of Islanders who are travelling with us, and of course black Americans. No one who’s been aware of music over the last 20 years could possibly overlook the contributions of John Lennon for one, and the feeling is that you’ve lost a comrade, somebody who was a part of what you were doing, who was a part of the same focus and hope for everybody, who has been senselessly lost, for little or no reason, and it took everybody a while.  At the end of the show, when Stevie came out and finally announced who it was who’d been killed; he was clearly upset to the point of tears. Carlos Santana was with us and was touched beyond words.  At the beginning of the show, Stevie had made an announcement that we’d all lost somebody who was close to all of us, and then he didn’t go into it, he just went on with the show.  But during the encore, he came out and told us why it had been so difficult for us all collectively to put on the show as we wanted to, was that John Lennon had been killed.  In an arena that large, with such a large audience, it was so silent that you could have heard a pin drop.   The grief and shock were tangible.  It’s no question that everybody who has appreciated music has appreciated John Lennon”.

Here is a youtube.com video of Ted Koppell on ABC the night of the shooting.  It’s interesting to see what is happening in the world.  Jimmy Carter had been defeated by Ronald Reagan (whom GSH characterized famously in the song/poem “B-Movie”), the Iran Hostages were still captive, Poland was being invaded by the Soviet Union.