Orchestra Baobab, one of my all-time favorite African bands, celebrates the Golden Anniversary of its formation this year. The group will mark this milestone by releasing their 2002 reunion album, Specialist in All Styles, in vinyl for the first time. (Pre-order it here.)  Specialist in All Styles was the first album released by the original group members since they recorded Pirates Choice in 1982. The band was joined in the studio by special guests Ibrahim Ferrer (Buena Vista Social Club) and fellow Senegalese superstar Youssou N’Dour. Baobab had disbanded in the late 1980’s, and ironically, it had been Youssou N’Dour’s popular new Senegalese music style called mbalax that pretty much put the older Cuban style of Baobab out of fashion. But with the participation of N’Dour, who co-produced the album with Nick Gold, Baobab’s star shone more brightly than ever on this record. 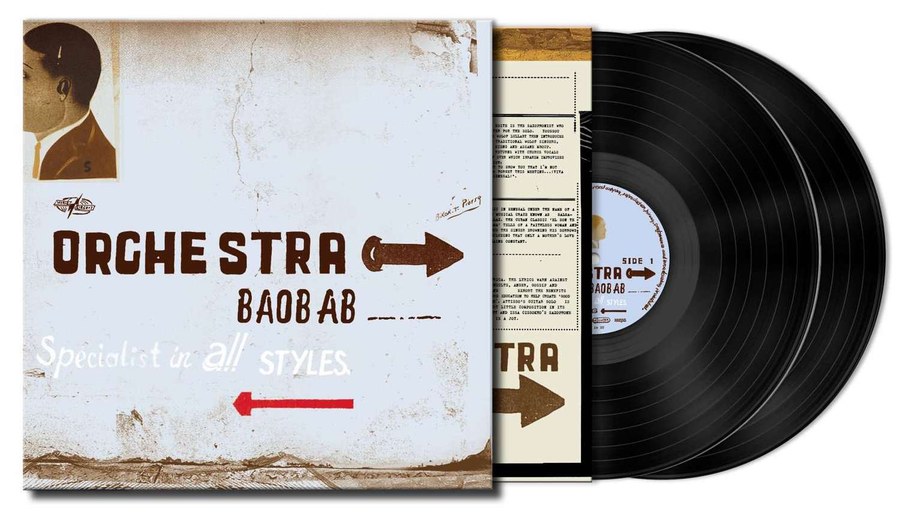 Orchestra Baobab embraced Cuban music, which first landed on West African shores in the 1940’s via 78 rpm records. Musicians from Senegal, Congo, and Mali added the Cuban 3/2 and 2/3 clave beat into their own music. It’s a classic example of musical cross-pollination: African music goes to Cuba, changes over time, then returns to West Africa in a newer, energized form. African musicians recognize the African elements in Cuban music, and incorporate into their own. Specialist in All Styles is a perfect storm uniting both Cuban and Senegalese styles.

For those unfamiliar with the Baobab sound, it’s the sort of music you play later on, after the party has died down and just a few close friends remain on the dance floor. Slower and sweeter than salsa, mellow and old school, Baobab’s music is simply soulful. The guitarist, Bathélémy Attiso, turns in amazing solos, as does tenor saxophonist Issa Cissokho. When Orchestra Baobab disbanded, Attiso returned to Togo to practice law, which he had originally come to Dakar to study in 1966. He would not play the guitar again until the 2002 reunion album and incredibly had to re-learn the instrument. Cissokho, for his part, adds a wonderful jazz element to the band’s overall sound.

If you don’t have any Orchestra Baobab albums in your library, please get one. Specialist in All Styles would be a great start, but I’ve also pulled together my favorite tracks in the above playlist. I particularly love the songs that feature guitarist Attiso and saxophonist Cissokho, which tend to be the most soulful and typify the magic of Baobab.

The following video for the song “Fayinkounko” accompanied the release of Baobab’s 2017 album Tribute to Ndiouga Dieng. Dieng was their long-time vocalist who passed away in 2016. I like that it incorporates historical footage of the group.