We’re back this week with 20 more new songs and re-discoveries for your listening pleasure.  I receive dozens of new releases each month, and I’m a little amazed (and grateful) that so many wonderful CDs and LPs continue to be produced given how much music lovers consume via streaming and downloads now. I’ve listened to the albums, chosen the cream of the crop, and sequenced the tracks in the playlist. Now all you have to do is enjoy it—at home, in the car, or however you listen to music!

We begin the playlist with a quartet of jazz tracks. Sax veteran Joe Lovano’s new ECM album Trio Tapestry shows him in a new light—spare production, very transparent sound, and lots of space. This is the meditative sound of Joe. We next hear “Good Bait” from John Coltrane’s 1958 album Soultrane. The Concord Music Group recently released the complete Coltrane Prestige sides in both CD and deluxe 180g vinyl versions. These are the records he made before signing with Atlantic. Blue Note is also reissuing classics on deluxe 180g vinyl, with the first being Wayne Shorter’s brilliant album Etcetera. Like the Coltrane set, the vinyl here also shows off engineer Rudy Van Gelder’s golden touch. Fourth up we have another veteran saxophonist, Branford Marsalis, with his long-running quartet.

We segue to the classic Tito Puente song “El Bajo,” from one of his 1950’s RCA Living Stereo albums. I heard this track on the radio and bought a used vinyl copy. It’s classic mambo, with a riff that Puente also used later in his “Ode to Cachao,” the great Cuban bassist. A contemporary Cuban group, Asere, follows with a live track from their new album Asere Live.

Ibibio Sound Machine, fronted by Nigerian singer Eno Williams, comes next with a song in a new Nigerian style called “beats.” We hear in the contemporary sound a sample of Grand Master Flash’s hip-hop anthem, “The Message.” Rafiki Jazz is a U.K.-based group made up of members from four countries. Their song “Sunno” comes from the album Har Dam Sahara and is also included on the Rough Guide to World Music. I like Rafiki Jazz a lot and featured a different track by them in the last Rhythm Planet playlist, off of the compilation Rough Guide to Women of the World.

Anoushka Shankar‘s new compilation album Reflections includes music from across her EMI and Deutsche Grammophon albums over the last decade. We feature a track with her half-sister Norah Jones called “The Sun Won’t Set,” originally on her 2013 album Traces of You. We follow with guitarist Dominic Miller’s second ECM album, Absinthe, which features him along with French drummer Manu Katché, bandoneon player Santiago Arias, and other musicians. The track “Mixed Blessing” is meditative and hypnotic. After that, New York saxophonist Alexa Tarantino leads the quartet called Something Blue on a new album from the Posi-tone label. We hear her song “Copper Tone”—think sax and SPF.

WEA/Rhino Records has just issued a big box of Ornette Coleman’s complete Atlantic Records albums, and I’ve chosen his wonderful song “Ramblin.” Listen for Charlie Haden’s country-western basslines, and I love it when he yells out a “whoop” in the middle of Ornette’s solo.  This is one of my favorite Ornette songs, albeit less famous than “Lonely Woman.”

The young pianist-composer Dave Meder is next with his debut album called Passage. The lovely ballad called “Elegy” features saxophonist Chris Potter, who never ceases to amaze me with his virtuosity on his tenor. We then hear from Charlie Dennard, a pianist based in New Orleans. Although I did not know his work before this new album Deep Blue, Dennar has earned several degrees in music, performed with Cirque du Soleil, and worked with and recorded with top New Orleans musicians. I like the feel of the track “Mojave,” which features an Indian flute player on the bansuri, the Indian cane flute. The next album, by Itiberê Orquestra Familia, pays tribute to Brazil’s multi-instrumentalist Hermeto Pascoal. The music is dense, complicated, and fascinating—a reflection of Pascoal’s musical sound and ideas.

Icelandic composer Ólafur Arnalds is relatively new to me, but I am taken by his compositions and sound. I would describe it as classical crossover, with lovely textures, finger drumming, and string writing. There’s a visual and cinematic feel to the music that would make for a lovely soundtrack as well. We hear “ypsilon” from Arnalds’s 2018 album re:member, to which I’ve returned and listened again recently.

German pianist-composer Hans Otte released his album Das Buch der Klänge (The Book of Sounds) way back in 1984 on the German Kuckuck label. I loved it then and used to spin the vinyl on air. It was an early example of the new age music coming out of Germany back then, but it wasn’t soupy or airy-fairy. Otte’s followers included John Cage, whose dictum “let sounds be sounds and give them time to breathe” would apply to Otte’s work. The Beacon Sound label just reissued this album on deluxe 180g vinyl, and getting it was a wonderful surprise for me and a way of remembering the composer, who died in 2007. 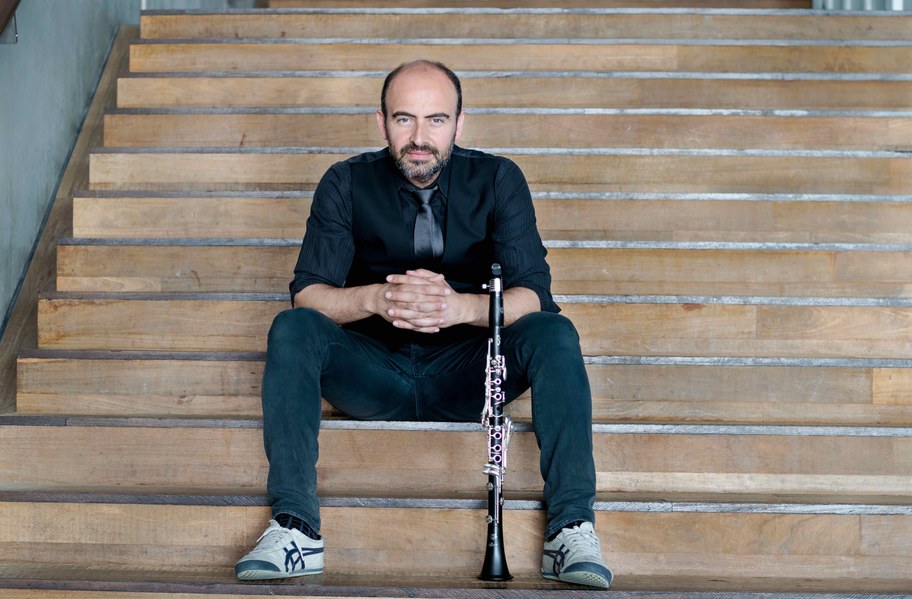 Syrian-born, New York-based clarinetist maestro Kinan Azmeh (pictured above) is out with a new album called Uneven Sky. It features cello superstar Yo-Yo Ma, who founded the stellar world music group The Silk Road Ensemble, of which Azmeh is a member. I was fortunate a few years ago to host a Hollywood Bowl show that featured Azmeh with the group, and his on stage jamming with Galician bagpipe player Cristina Pato blew me away.

We end the playlist with a new album by Israeli jazz guitarist Yotam Silberstein, featuring Glenn Zaleski on piano, bassist John Patitucci, and others. The album reflects on Silberstein’s travels around the world and the musical cultures he met there. I hope you enjoy all the music!