The Great Johnny Otis Dies at 90 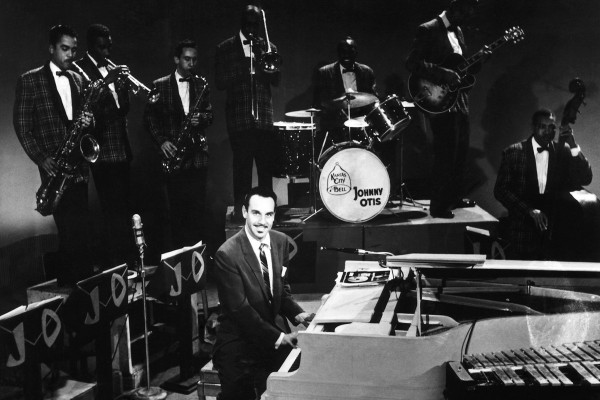 One of the great things about being older is that you remember artists who meant a lot to you, artists that younger people might not even know about.  One was Ioannis Veliotes, young son of Greek immigrants, who moved to LA and became Johnny Otis.

He was all over the place when I was growing up.  He had a radio show during the heyday of AM radio, on KFOX.  He had a television show where he introduced us to great R&B and soul acts such as Little Willie John (original version of “Fever” that Peggy Lee got all the credit for),  Jackie Wilson, Hank Ballard, Esther Phillips, Bo Diddley, Don and Dewey, The Three Tons of Joy (a Gospel group), Big Mama Thornton.  He also produced Etta James first hit song.   He’s rightly been called “The Godfather of Rhythm and Blues”  Otis scored hits with his version of Earl Hagen’s “Harlem Nocture” as well as a top 40 hit, “Willie and the Hand Jive”  He had a big band that was second to none.  He played drums, vibes, piano, violin.  His revue was a huge hit at the 1970 Monterey Jazz Festival.

As a young man he came down from the Bay Area, where he was born, to LA in the 1930s and the Central Avenue scene, where he saw Lester Young, Art Tatum, Dexter Gordon, T-Bone Walker.  He identified so much with black music that he decided he’d rather be black than white.  Few even knew he was Greek.  He moved into a black neighborhood and made black culture his life.

The British Invasion helped put him out of business.  Motown Records didn’t help either.  The Stones and Beatles were doing their own versions of Chuck Berry and Wilson Pickett, just like Elvis Presley had covered Otis’ song “Hound Dog”, that Otis wrote for Big Mama Thornton.  Or Peggy Lee covering Little Willie John’s “Fever”.

Not surprisingly, he supported the Black Power movement in the 1960s.   Politics didn’t help further his career with the entertainment industry. He publicly explained why he understood and supported the Watts Rebellion in 1965, citing police harassment and brutality in the black neighborhood that he knew and understood.  His television career and jobs fizzled after that.

It reminds me of how Miriam Makeba was blacklisted after speaking at the United Nations against apartheid in her native South Africa, and later marrying Stokely Carmichael.  She was banned from returning, and movie and record deals stopped.  No more opportunities came her way after that.

When I interviewed Otis in 1983–at the old KCRW studio–he was a pastor, running a church in Alta Dena.  By that time he had written two books about life, politics, and of course, black music.  He also had an organic farm at the time, as well as a radio show on Pacifica Radio’s LA outlet, KPFK.    Here’s a video of his TV show featuring The Three Tons of Joy as well as Lionel Hampton.