I recently revisited some of Toru Takemitsu’s work, which I first heard in college with a recording called “Coral Island.” It was way too far out for me then.

But listening now, years later, I am amazed by the color, shading, the dialectic of abstraction and order that inhabit his work. A few months ago, after reading the obit for boxer José Torres, I was reminded of Takemitsu’s dramatic piece in the film about the fighter, “Music of Training and Rest.” 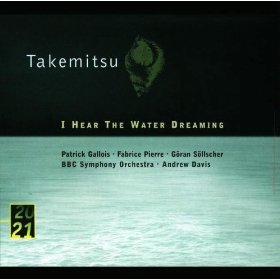 Lately, I’ve been listening repeatedly to the wonderful piece ,“I Hear the Water Dreaming.” My impressions: beauty disintegrates into the incomprehensible.

Order and terror conjoin. The Zen garden and Hiroshima.

Takemitsu’s music, like the beauty and entropy of life in itself, also reminds me of why Debussy was so smitten by Japanese music, also why Debussy, like Takemitsu, didn’t like formal musical titles for his works, like sonata, concerto, etc. Both composers liked impressionistic names.

In “Dreaming,” flutes mingle and flutter with harps, horns, guitars, and other single instruments. The music does not tell you what to think or feel; it’s far too abstract for that.

It does, however, envelop the listener in a well of deep meditation, and you are forced to focus on colors and textures, rather than motivic development, harmonic progression, and the usual stuff that classical music is made of.

It makes for a liberating experience, and what you hear becomes more like painting or sculpture than music. It more so resembles the musical equivalents of Rothko, Kline, Sam Francis, or Motherwell than it does other modern music. I highly recommend hearing it.

Start here, with I Hear the Water Dreaming.

END_OF_DOCUMENT_TOKEN_TO_BE_REPLACED
KCRW’s Season of Giving Back – KCRW fans Ashley, Matt, Wyatt, and Marlowe Kline challenge YOU to donate to KCRW TODAY. If we can raise $12,500 they will match it!
Give Now
Give Now!