Radiolab host Jad Abumrad is known for experimenting with sounds on his show and his Guest DJ picks reflect both his musical sophistication as well as some guilty pleasures. Jad talks about forming his musical identity with epic rock anthems, when Underworld destroyed him on the dance floor and how Bartok transformed the way he thinks about classical music. Fans of RadioLab will love this insight into the show’s beloved host. Jad will be speaking at the Luckman Fine Arts Center on October 14. 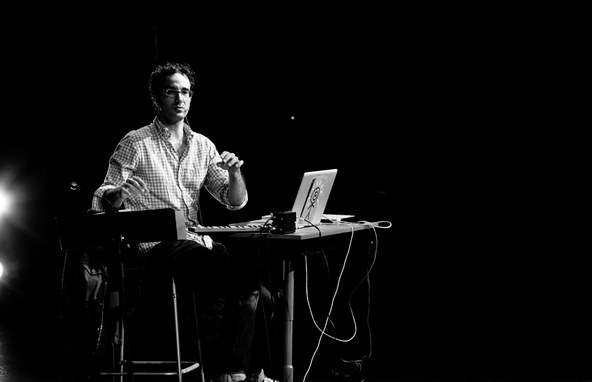 Tracklist
1. Def Leppard - Photograph
2. U2 - Where the Streets Have No Name
3. Bartok - Concerto for Orchestra
4. Underworld - Rez
5. Stars of the Lid - Better Angles of Our Nature

Eric J. Lawrence: Hi this is Eric J. Lawrence from KCRW and I am here with our guest Jad Abumrad, host of Radiolab, a fantastic program produced by WNYC. Jad’s background in music composition has influenced the way he edits the unique soundscape of the show so we’re interested to hear about some songs that have influenced him, as part of KCRW’s Guest DJ Project. Jad, thanks for coming down.

Jad Abumrad: Hey! Thanks for having me.

EJL: What’s the first track you’ve got for us?

JA: The first track - and I would guess it’s everybody’s first track - is Def Leppard, “Photograph,” which is circa 1980-something...3, 4, 2 it doesn’t really matter. In fact, it defined that entire decade I would say.

JA: This actually might be the first song I ever actually chose to like. Because I think, when you’re a kid and you’re hearing stuff on the radio, and you’re sitting there -- in my case with a cassette recorder waiting for Casey Kasem to say the name of the song. And then at a certain point CDs come along, and you can actually choose music and you can buy music, and you can form your musical identity. And that identity for me rests on the fundament of Def Leppard. Starting with “Photograph” because it is just still…I’ve moved way past metal - but still it is such a great song!

JA: I hadn’t actually listened to this song in a long time so I went to defleppard.com and on the front page is a video of Taylor Swift -- the pop cookie, country star of the moment -- singing this song, and singing it really well. It somehow legitimized my…I thought, ‘maybe it’s time for me to like this song again.’ If Taylor Swift is doing it, it’s no longer guilty -- this is a legitimately great song.

EJL: That was Def Leppard with “Photograph” as selected by our guest Jad Abumrad. What’s the next track you’ve got for us?

JA: I started thinking about this chronologically. I do remember a particular time when I was driving down a very empty freeway in Nashville, Tennessee, where I grew up. And I remember I was sort of ebbing in my love affair of glam metal. I remember having this sense of like ‘what music will I listen to next?’ I was just kind of searching around, I think we all go through that. And on the radio came U2 “Where The Streets Have No Name.” And it sort of struck me the way that “Photograph” struck me.
It was this sort of anthem that seemed to be talking about nothing and everything at the same time, and those guitars... It was sort of like this epic, Biblical song about - I didn’t know what - but it seemed to speak to me at that moment on that empty road. So, “Where the Streets Have No Name.” That would be my number 2.

EJL: That was U2 with “Where the Streets Have No Name,” one of their big hit singles, as selected by our guest DJ Jad Abumrad. Well, the classical training certainly has some connection to your next selection, you picked something from Bartok.

JA: Yeah, for me there was a moment when I got really into classical music when I went to study music at school. I remember showing up there -- and I was writing a lot of like poppy, jingly kind of stuff -- and I show up at this college which has some really hard core new music fanatics teaching in the composition department. Like Stockhausen, Schoenberg, Webern - all these guys who are playing like real squeaky, squawky, a-tonal kind of stuff - it was a total shock for me. I’ve since grown to love that stuff, but at the time I was like, ‘Oh God,’ and it was so de-stabilizing.

I remember being completely adrift in this world of new music and I had nowhere to plant my roots. And one day in composition class our Comp Teacher -- who was a complete bastard, he would terrorize us mercilessly -- but he put on this Bartok’s Concerto for Orchestra. And I just remember, as a lot of Bartok, it has this interesting sort of strange dissonances and weird tunings and there was a moment when the strings are kind of building or something is happening and then the horns come in. The color of the music and the impact of the music shifted so violently - I remember just getting pinned in my seat from these horns. It was like, fricking, the horns of Jericho or something came out of the stereo.

JA: And music was visceral for me at this moment, whereas a lot of classical music wasn’t up until that moment. And I remember thinking, ‘Oh, I guess you can do that.’ I guess you can think of the Orchestra as a physical thing that can make music that can hit people. I didn’t think of it ever that way before. So, Bartok really turned me on to that whole idea.

EJL: That was Bela Bartok “Concerto for Orchestra” as performed by the Berliner Philharmoniker as directed by Zubin Mehta and selected by our guest Jad Abumrad. The next selection you’ve got for us is a classic of electronic music. It’s Underworld.

JA: Yah…this song - whew! Underworld “Rez.” So here’s the thing, right around the Bartok moment for me, I remember that this song had the same impact. I mean for all the sort of like musical pretense I bring into the room, give me a good, trashy Techno song any day and I’m happy. The best dance music or techno just has something primordial about it. It just comes from the center of the Earth somehow.

JA: I remember being at this club one night in college and just hearing it and like having my life change as a result of this song. Not in that sort of intellectual way that good, well constructed music can deliver. But just in that way that you are this object moving through space and you hit something and you glance off and go in a different direction - it had sort of that physical quality to it.

EJL: That was Underworld performing the classic Rez as selected by our guest, Jad. What’s the last track you’ve got for us?

JA: Last track, just to totally shift the mood, is something that sort of typifies a genre of music that I can’t get enough of now and that I use a lot in the show. This is Stars of The Lid, “Better Angels of Our Nature.”

JA: When I started living in New York and I started trying to write music for films and to really make my livelihood with music, something about this kind of music really started to speak to me. Maybe it’s the fact that you’re in New York and your entire life is sort of this like an experiment in human friction. There’s just people everywhere. You go outside and you’re on the street and your whole world is framed by buildings and you look up and you see no sky at all -- except for like a small rectangular patch of sky. And there’s something about this music that speaks to wide open spaces, not just geographically but spiritually, emotionally. It makes you feel endless. I think the music is designed that way.

*Song: Stars of the Lid - Better Angles of Our Nature*

JA: There’s no melody, there’s no harmony, there’s no nothing. It’s a kind of anti-music in a way. And it’s a fetishizing of texture over all else. I don’t know - something about that really makes sense to me. Because you can walk down the street and Stars of the Lid can be in your ears and it’s like the world suddenly has a kind of cohesion or something.

EJL: I think of it as also similar to a lot of music that I hear on Radiolab, used sort of as part of interstitial kind of music. Have you used them specifically?

JA: Oh yeah - I use them a lot. I mean, what I end up doing now, is approximating Stars of The Lid because of the way that we use sound it’s like…we’ll take a small piece of sound that we might sample from somewhere or you’ll get a cellist to just  bow a note and then you run that through a series of echos, and loops, and filters and various things and what you end up with are these huge washes that go on forever.
Then you run those through filters to give them a kind of a shape and a contour and it ends up all “Stars of the Lid-y.” But that’s kind of what I want for the show. I don’t want music. I want something that is somehow in between. It’s sort of - ethereal and never quite present. It’s like the sound of the refrigerator. You know? Sometimes you hear a hum and you’re like, ‘That’s beautiful.’

JA: Well, it’s also just something beyond reassuring, I think. Like I remember being on a tractor once and hearing the tractor go “weee-ohhhh-wowww-ohhhh.” And that is something in the drone - there’s something in drones that I think is quite awesome.

EJL: That was Stars of The Lid. We have their composition “Better Angels of Our Nature” as selected by our guest Jad Abumrad. Well, Jad I want to thank you very much for coming down and joining us.

JA: No, this is a blast! Thanks for having me.

EJL: For a complete track listing and to find these songs online go to kcrw.com/guestdjproject.