Portland-based artist Jessica Jackson Hutchins specializes in mixed-media sculpture – transforming household objects into creations that speak to the chaos of domestic life. She strives to transfer the feeling of music she loves into her work. Hear some of her obscure and intriguing favorites. Her work is currently on display as part of the Hammer Contemporary Collection. 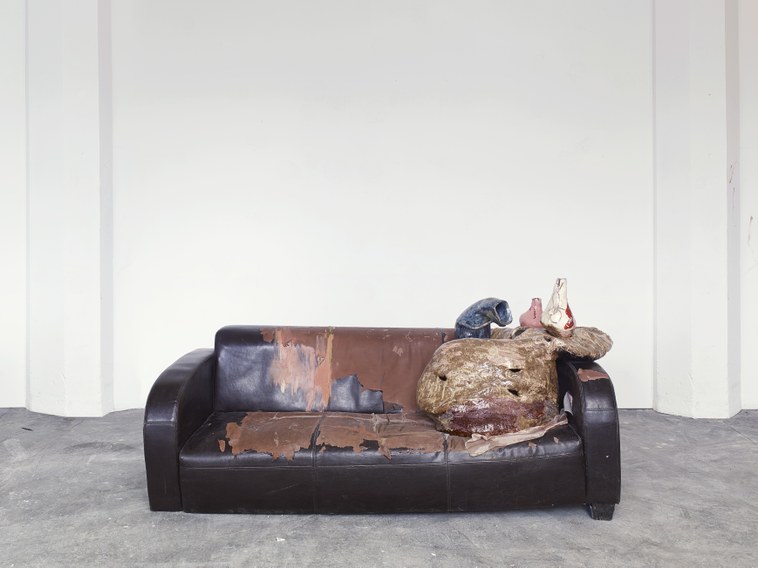 Chris Douridas: Hi, I’m Chris Douridas. I am here with Portland-based artist Jessica Jackson Hutchins. She specializes in mixed media sculpture, transforming household objects into creations that speak to the chaos of domestic life, relationships, motherhood, and so much more.

She’s been exhibiting her work at museums and galleries from coast to coast since she graduated from the Art Institute of Chicago over a decade ago. We are very happy to have her with us here at KCRW to talk about some of the songs that have inspired her over the years. Welcome to KCRW’s Guest DJ Project.

Jessica Jackson Hutchins: Thank you so much for having me. This is fun.

CD: Very excited to see what you brought in for us.

JJH: The first song is from Royal Trux. It’s called “Mercury.” This song in particular I chose because it really exemplifies one of the things I love about them which is that dark, chaos, insanity where it just barely kind of holds together.

Last year, or a couple of years ago, I was making a show for my gallery in Berlin, Johann König, and I didn’t have that much time for it and I thought I’d exploit that fact by making really kind of raw, punky sculptures and this song “Mercury” was going through my head a lot during the process of making this one in particular, raw crazy piece.

CD: Talk about naming the sculpture and how this song actually impacted the name that would be on it.

JJH: The way Jennifer Herrema sings that song [Imitates her singing] and there was something of that in the sculpture. That just gnarly, aggressive kind of ugliness. You know, in the end, that is something I kind of try for. I try to get all that energy to be actually in the object.

CD: I know you spent a lot of time in Germany

CD: And I see a German band on your playlist, the experimental rock band Can. Tell us why you chose this one?

JJH: When we were living in Berlin they had the what, 40th anniversary of that record Ege Bamyasi and our friend Jan Lankisch put together a little music festival in which he got Stephen reunited or united with some musicians from Cologne.

CD: When you say Stephen you mean Stephen Malkmus, your husband.

CD: Who people will know for his work with Pavement and Stephen Malkmus and the Jicks.

JJH: Yeah. He was part of this festival and Jan, our friend, had made this backing band for Stephen to kind of “play” Damo Suzuki, the singer of Can.

And they performed the record and it was magical. It was incredible to be in the audience for that because that was a favorite, especially for “Vitamin C” which is what I chose. Well that’s a very joyful song I think too on top of just like the droning or the relentless, repetitive drumming and the spontaneity.

CD: Was music part of how you came together with Stephen?

JJH: Kind of not. I mean, I was always really into music and I was a huge fan of Pavement. I think by the time we met though, I don’t know, we were both older. I was no longer a fan. We came together, I think, because of who we are as people, but it is something that we both really love. But when it can bubble up, it is very romantic, I have to say.

CD: A track from Ege Bamyasi from the German band Can, 1972. It’s on Jessica Jackson Hutchins's Guest DJ Project here at KCRW. What’s next?

JJH: Next is Chrissy Zebby Tembo. A song called “Trouble Maker,” from his record My Ancestors.

There’s this cool little reissue label in Portland called Mississippi Records and they reissued this. Stephen, my husband’s, old drummer Janet Weiss gave it to him as a Christmas present so that’s how I discovered it and I just love the recording quality of it. It’s kind of low fi, but really unique. Kind of like an African Black Sabbath or something. I had just really never heard anything like it.

CD: Am I reaching when I see a parallel between the kind of music that you gravitate to and the artwork that you produce?

JJH: That is a fun thing about being an artist in the studio, is how much you get to listen to music. My really explicit ambition was to get the feelings of that music into the work and then to have it, you know, have that same vibe that I would love in whatever music that turned me on. And we’re all, I think, as people trying to script our lives through things, through music, so much, right, but also just through the objects that you come across. And to me that process is what’s beautiful.

CD: This is Chrissy Zebby Tembo, the track is called “Trouble Maker,” from our guest DJ Jessica Jackson Hutchins.

CD: That’s called “Trouble Maker.” That is Chrissy Zebby Tembo and I wouldn’t be surprised if that is the first time ever you’ve heard that song. It comes to us as part of the Guest DJ Project put together by our guest, Jessica Jackson Hutchins.

You have a gospel song up next; let’s talk about The Children of Sunshine and their song “Dandelions.”

JJH: Yeah, they are two sisters from Utah, as far as I know, and it’s a private pressing record that came to us by our friend, Jesper Eklow, who is in this great band Endless Boogie.

We got it at a time when I was planning on making this woodcut print out of our grand piano, which was out of tune and a mess, but also a beautiful shape. I wanted to make a traditional kind of wood cut and then ink that up and make big prints from it.

And I thought, well before I do that, I’ll document it, in place, and so we got this little band together with our two daughters and babysitters who were sort of magical musicians and I made a video of us jamming around this piano - Sunday was an infant at the time - and I carved into the piano lid, The Children of Sunshine, as we were playing music and covering this song.

Song: The Children of Sunshine – “Dandelions”

CD: The Children of Sunshine with "Dandelions." What’s last here?

JJH: The last one is called “Bring in the Water,” the band is called 3 Hand Stephen and the album is called The Tree People. It’s a trio from Eugene, Oregon. I know the lead singer is named Stephen Cohen and I first heard this record, I guess right before I had my first kid at home, Lottie.

I played this record all the time right after she was born so it’s kind of a nostalgic sounding record anyway -- these folk songs from Eugene you can practically hear the rainy days, I think -- but it has this extra layer for me. We have this apricot tree and it was in this, you know, full bloom of pink blossoms like it’s never been before or since and I would listen to this album and bounce Lottie around.

CD: “Bring In the Water,” it’s the 1979 release, The Tree People from 3 Hand Stephen out of Eugene, Oregon.

CD: Our guest has been Jessica Jackson Hutchins, I really appreciate the, you know, the care in which you put this together for us.

JJH: No, it was really fun. It is fun to share these favorite songs of people.