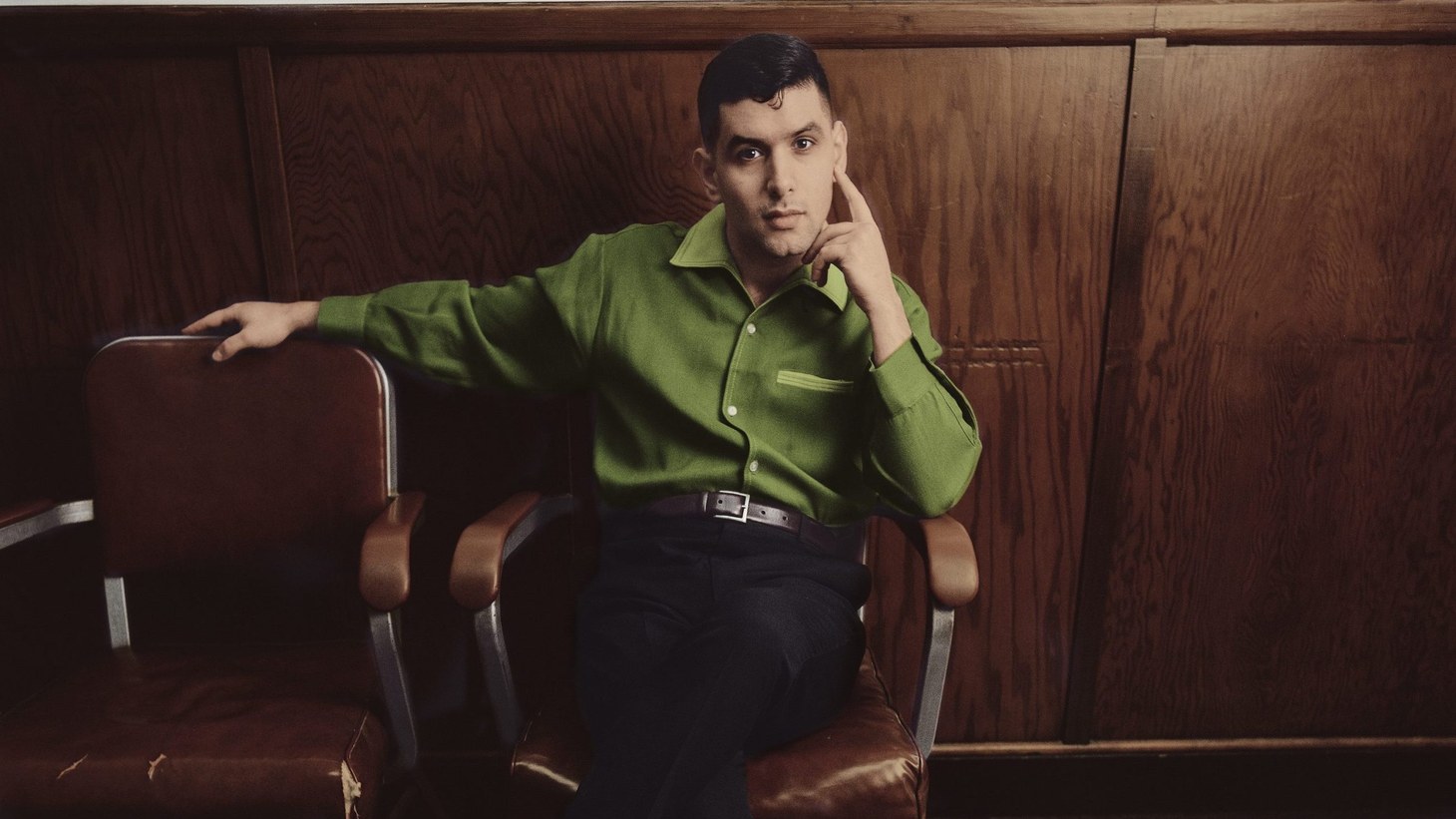 Aaron Frazer is the co-founder, songwriter, drummer, and singer for Durand Jones and The Indications. In January, the Baltimore-raised, Brooklyn-based polymath stepped out from behind his drum kit to take center stage on his solo debut album, “Introducing…,” produced by the Black Keys’ Dan Auerbach.

The record is a soulful work of blues and gospel that straddles lush, horn-laden production and raw expression, all girded by Frazer’s signature falsetto. The artist stopped by KCRW’s Morning Becomes Eclectic via New York to deliver a handpicked performance with his band. He also spoke with MBE co-host Anthony Valadez about the inspiration behind the album, working with Dan Auerbach, and the unlikely road to discovering his falsetto.

Aaron Frazer: “Definitely collect records. And specifically 45s. That's mostly a functional thing. I'll DJ and spin out sometimes after our shows, and 45s are just a lot lighter to carry around than LPs. So yeah, it's been seven-inches for a while.”

Was vinyl your gateway into actually making music?

“In a way. I think it was discovering hip hop when I was maybe 10 or 11. I heard Jay Z’s ‘Hard Knock Life’ on ‘Now! 2’ or something. And from there, I think I just fell in love with it. And specifically, the kind of stuff I listened to was a lot of sample-based stuff. So, at some point, a couple years later, I wanted to make my own hip hop instrumentals. And I did wind up going into Goodwills and looking in the dollar bins and finding records, and I think that's how I made my own way into soul music.”

How did you discover your falsetto?

“I discovered my falsetto in probably 2013. I was living in Bloomington, Indiana and doing a thing where on Friday nights, rather than going out, I would stay in and try to write a song in a different style. I wrote this song ‘Is It Any Wonder’ and I sang it in my chest voice. And I listened back to it and was like, ‘That's not very good.’ But I had just started working with Durand Jones, and I was like, ‘Durand can sing anything and it would sound amazing, so I think he would do it justice.’

So me and Blake Ryan, our guitar player, recut the instrumental and I recorded a guide track vocal for Durand to use. I was just laying down on the couch feeling very relaxed when I was doing that. So for some reason I sang it really soft and in my head voice and falsetto like that. So what you hear on that first Indications record on ‘Is It Any Wonder’ is me trying falsetto for the first time.”

Was there confidence with that falsetto, or were you just experimenting, discovering that voice?

“I was having fun with it. But it's interesting, because ‘false’ is in the name, but when I listened back to it, it really did for the first time feel like me, like my authentic voice. And from then on, it's how I felt most comfortable singing.”

A component to “Introducing…” that makes it stand out is how it walks the line of not being polished, but yet it's very clean and somewhat gritty. Was that intentional in the production process?

“Yeah, absolutely. I love these really sophisticated productions, like Curtis Mayfield always comes to mind for me. I think about him like a watchmaker or like an architect. But then on the other side of it, I really loved just like the rawness of these records where some kids just saved up and got enough scratch to get into a recording studio for an hour or two. They cut the ideas they had, they used the tools they had, and I think the imperfections sometimes are what makes it beautiful. So that was the needle I was trying to thread on on this record, and I'm glad it translated that way.”

One of the big components of this record is Dan Auerbach. When he called you up, what was going on in your head?

“It was really surreal, because I didn't feel comfortable singing in front of anybody for many years. I didn't even allow myself to really try to sing until I got my driver's license and I could actually be in this little box of privacy where you can just relax and just and just let loose a little bit. What I was singing at the time was just Black Keys stuff, around the time ‘Brothers’ had come out, and some of the earlier stuff.

So to get a phone call like that from somebody that I'm just a genuine fan of…. And then to start talking about records pretty immediately... We just all of a sudden found ourselves in this musical conversation like ‘Okay, well this song, this song,’ and then I send the song, he sends a song. The beautiful thing about music is that all these records are in conversation with like, five other records, and we just quickly realized we just meshed a lot in where we were coming from in this very eclectic,  diverse range of influences and music that we treasured. And so it felt like a seamless match.

Was “Introducing…” a concept that's always existed in your head, or was this sparked by Dan?

“In 2017, I put out a gospel 45 under the name the Flying Stars of Brooklyn. I just did it in my living room, like really raw. And I put it out and it just sort of ricocheted all over Spotify and the internet and the world, like millions and millions of times. And so I always knew. Obviously I love, love, love playing with Durand Jones and The Indications, and I'm still part of the band, but it's also nice to have a place where I can put some of the music that doesn't quite fit with what I'm doing with the Indications.

It's still songs that I love, it's just a different lane. So I thought I would just sort of trickle out 45s whenever I had the time, but Dan was like, ‘Nah, man, you got to do a full record, don't put it out under a pseudonym, put it out under your own name.’ And he gave me the confidence to make the time for myself, and for this batch of songs that I might not have otherwise for a long time.”

How much of an impact has gospel music had on you and your life?

“It's been huge for me. I didn't grow up in the church, but when I found it, and I started to listen to more of it, dig into it, it has definitely been at the core of some of my songwriting and my approach. Even if you're not religious, these themes of redemption, falling short, putting your faith in the things that ground you or give you strength, those are universal to me. … And so on my solo record, there are definitely moments like ‘If I Got It (Your Love Brought It)’ that's about that concept of, it's for whoever or whatever is giving you that strength or grounding.”

What was the inspiration behind “You Don’t Wanna Be My Baby?”

“I wrote that along with this writer named L. Russell Brown. He actually wrote a bunch of songs with Frankie Valli, one of the great falsetto voices of all time. So originally when we wrote it, it was a little more of like a throwback ‘50s rock and roll thing. But when we got in the studio, it just wasn't feeling totally authentic to me.

I tried to just bring it home to where I feel comfortable, which was the low and slow sound that I know a lot of people in LA and in California know me for. So I got the sixteenth notes on the hi hat and just kind of kept it slow and a little nasty, and I love how it came out.”

How did you process your experiences into “Introducing…?” On songs like “Done Lyin’,” you can tell there are some real life experiences in that cut.

“Addiction is something I think that, even if you haven't experienced it yourself, chances are you probably know somebody who's struggling with it in one way or another. And so for me, over the years, I've lost a couple of friends who've passed due to opiate addiction. And I just wanted to try to give voice to the experience and try to process that for myself. There's definitely an aspect when you listen to the lyrics of having been through those rounds over and over again, and just the fear of ‘Don't give up on me.”

We've asked you to bring us a cover. You picked “Good Time Charlie's Got The Blues” by Danny O’Keefe. Why this one?

“I love folk and country music, even though people associate me with a lot of other kinds of music. But it's all a part of me, and I think it's all part of American music. Danny O’Keefe wrote that one in the ‘70s. He was sort of a one hit wonder, but I think that's great. We should all be so lucky to get one. I think there was something about this line, ‘Everybody's goin’ away / Said they're movin’ to LA’ that here in New York just hit me right at the core. I’ve definitely got a couple friends who've moved out to California and out to LA, so everybody take care of them if you see them.”