A bird sits upon a locked basketball hoop in Venice Beach. Photo by Angel Carreras.

Most sports and recreational areas are back in full force in LA, as the county expects to move into the yellow tier of Gov. Gavin Newsom’s reopening plan this week.

In Venice Beach, Angelenos are using the tennis courts and skatepark.

But at the basketball courts, an iron bar is in the middle of each hoop, making playing nearly impossible.

Nick Ansom, Hoop Bus and Venice Basketball League founder, says the last 15 months have been rough. “Venice Beach is the mecca for West Coast basketball, people come from all over the world to visit it. Now everything's open but the basketball court. Every sport, every restaurant, even the Staples Center is open. It's ridiculous.”

Despite this, some people are still giving the sport a shot, counting points if the ball hits the lock, even if that means the ball getting stuck. 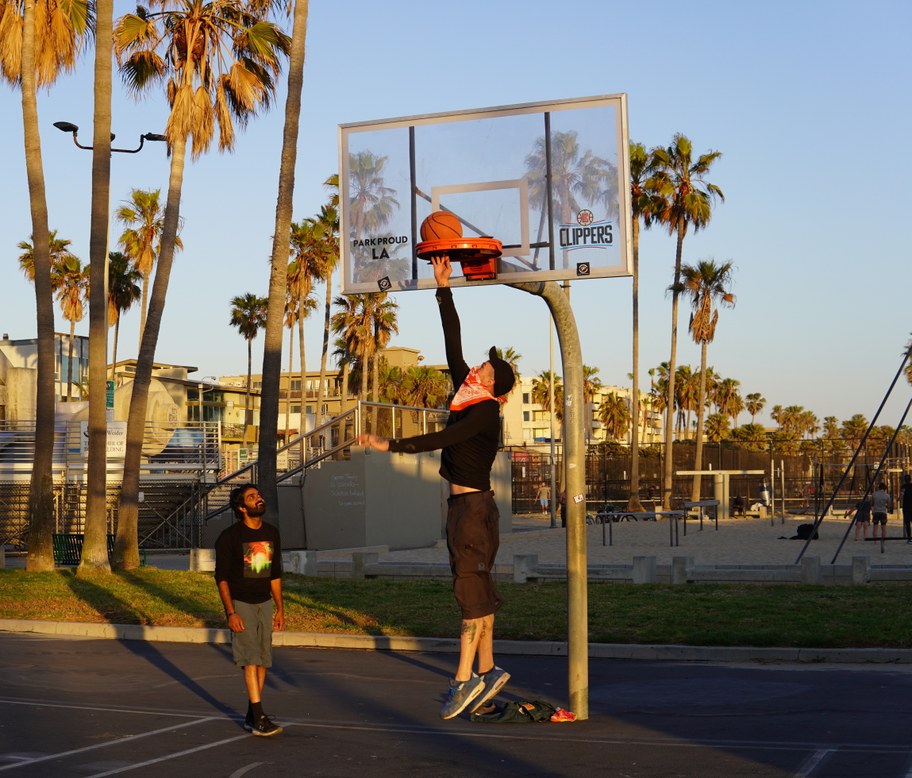 Two friends attempt to play a game of HORSE despite the iron bar. They get their ball stuck in the rim. Photo by Angel Carreras.

Ansom says he’s been pestering the city and parks and recreation departments for months to remove these bars. He’s received little to no help.

“We set up a call with the City Council at Mike Bonin’s office,” Ansom says. “They had promised us that they would free the hoops by the end of March. March came. It was like, ‘Good news, the hoops are gonna unlock this week!’ And then, womp, womp, womp.”

KCRW contacted Venice’s Parks and Recreation Department, who said they’re hopeful that the hoops will be unlocked once Los Angeles moves into the yellow tier. They said that ultimately, the LA Department of Public Health would be — and has been — responsible for removing the locks on the Venice hoops. At the time of press, May 3, 2021, they have not responded to requests for comment.

Some people have tried to remove the locks themselves, such as street magician Steven Brundage, who was detained and fined by police for that attempt.

Ansom opted for a less risky route. He started a #FreeTheHoops social media campaign, making shirts and Instagram posts meant to pressure officials to do the campaign’s namesake.

The Venice community helped too.

“We got some portable hoops donated by neighbors,” Ansom says. “People have been emailing me [that] they don't want hoops to go away. ‘Hey, we're moving out, we got some hoops to donate’ or ‘I found this hoop in an alley, it has a ‘for free’ sign.’ So I was like, let's roll those neighbor's hoops to the neighborhood court. And it was amazing.” 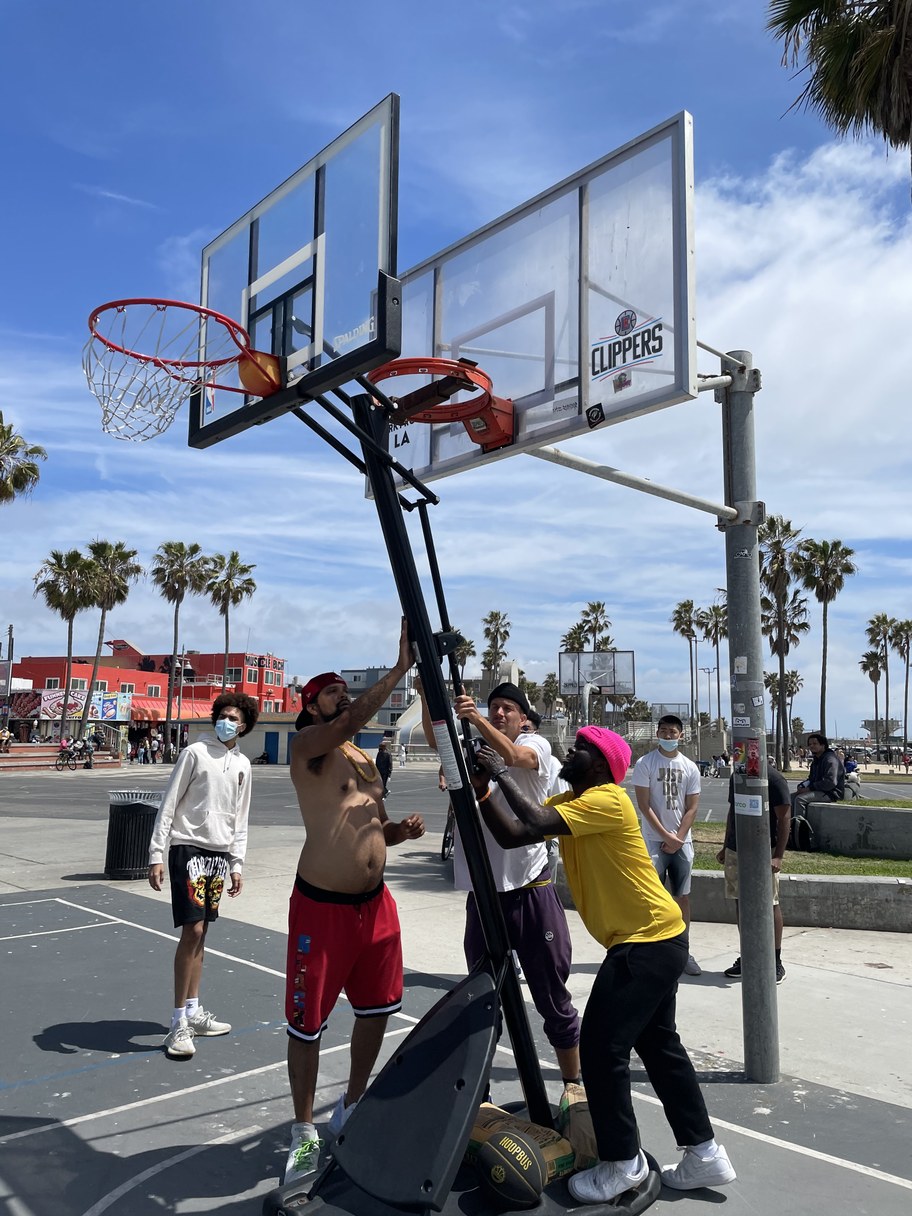 Ansom and others set up a non-locked hoop. Photo courtesy of Nick Ansom.

Ansom and others placed portable open hoops in front of the park’s locked hoops. Then he started a game on April 25. Soon, players, an MC, and an audience formed. Basketball was back in Venice, even if briefly.

“It felt like Christmas morning, you know?” Ansom says. “I mean, some guy just jumped out of his seat, started running to [the court] like The Holy Ghost. It felt good to be back at home. … I'm still kind of sore from it. We ended up playing from like, noon until 10 p.m., something ridiculous.”

Ansom left those hoops up, and he’s not quite sure what happened to them. They were gone last he checked.

But no matter. Last weekend, he rolled out some more donated hoops and got a game going again. He says he’ll keep doing this until the Venice Beach hoops are freed.

“This is the city of champions. We're the home of the Lakers, the home of champions right now and LeBron James. We need to create that next generation of champions that are born out of Los Angeles. So right now, they’re really slowing down the growth of the game of basketball in the city.”