The Hoop Bus aims to amplify the message of the Black Lives Matter movement. Photo by Angel Carreras.

A school bus driving around LA is turning heads. The Hoop Bus has basketball rims attached to the front and back, making it a basketball court on wheels. It’s all over town, cruising through Hollywood, parked in Venice, and attracting crowds at protests. 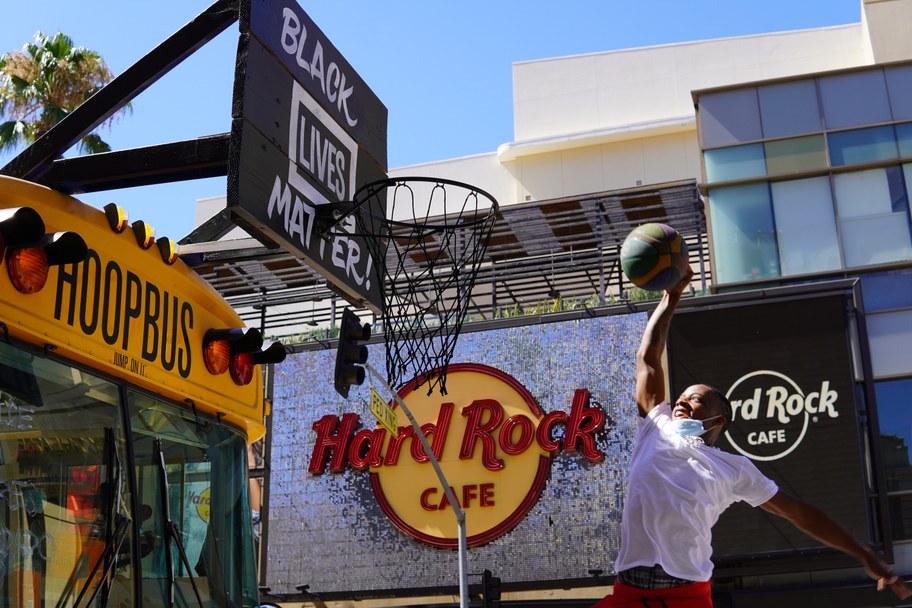 The Hoop Bus in Hollywood. A passerby stops by for a quick dunk attempt. Photo by Angel Carreras.

Nick Ansom is the driver and the brains behind this traveling basketball machine.

“I really want to see hoops everywhere,” Ansom says. “I love the casual encounters and random moments. ... You can just pull up on someone and kind of create something pure and candid and unscripted.”

Ansom also founded the Venice Basketball League in 2006 to bring the city’s best ballers together and to do good for communities.

Pure, candid, and unscripted moments were the norm in the league. It's an experience Ansom wanted to export throughout the city. But how? 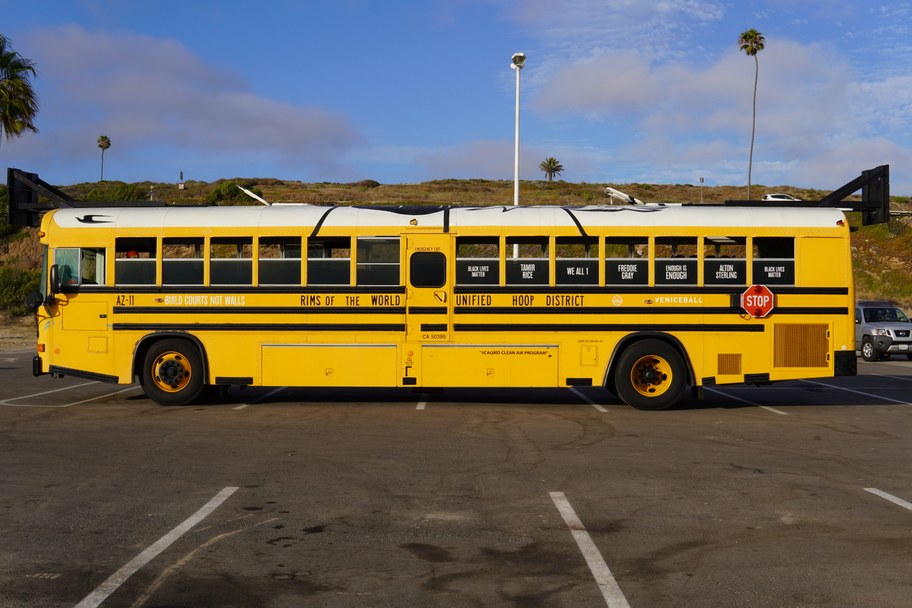 The Hoop Bus is fashioned after the yellow school buses Nick Ansom missed out on riding during his youth. Photo by Angel Carreras.

The idea for a bus was percolating with Ansom for a while, almost as soon as he immigrated to LA as a teen. He attended Fairfax High School.

He eventually met entertainment lawyer Nate Kelly and social media strategist Eliot Robinson, who became his partners in his basketball and philanthropic efforts, such as revitalizing basketball courts throughout the city.

Ansom told them about this basketball bus idea. After Robinson and Kelly helped with crowdfunding, the Hoop Bus was born. 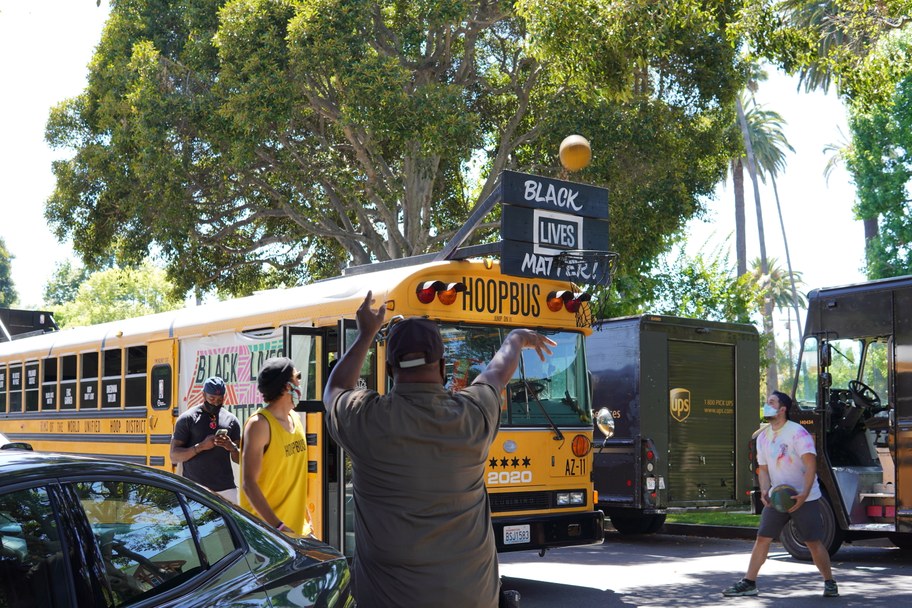 The Hoop Bus during a recent stop in Beverly Hills. A UPS driver takes a shot. A “pure and candid and unscripted” moment. Photo by Angel Carreras.

Ansom says the trio envisioned uniting “a big, giant family of every shape, size and nationality that loves the game and culture around basketball.”

That’s happened, but not exactly in the way they originally envisioned because 2020 had other plans.

Earlier this year, Kobe Bryant died. He was important to both LA and basketball’s cultural fabric.

They gave the bus a coat of Lakers purple and gold, slapped a Kobe-fied version of the NBA logo on the sides, and headed downtown the day of Bryant’s death.

“It felt like a Kobe pilgrimage,” Kelly says of the experience.

The trio was uplifted by reactions to the bus and wondered what else they could do to bring positivity to people.

Then the Black Lives Matter movement and protests against police brutality grew in LA.

The bus rededicated itself to the movement. It’s now adorned with the names of those killed by police. The front backboard reads “Black Lives Matter.” 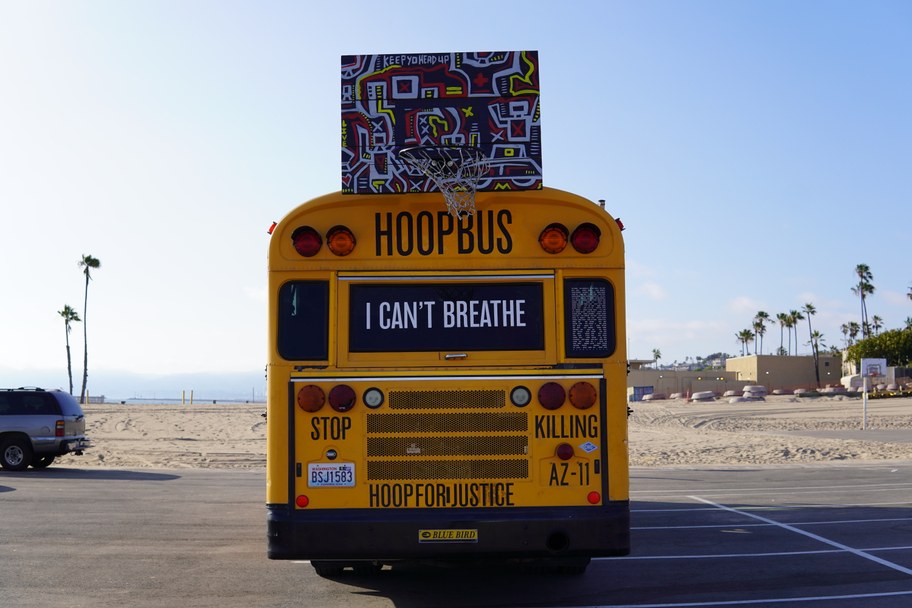 The names of Black people killed by police are on the sides and back of the Hoop Bus. Photo by Angel Carreras.

Kelly says he wants the bus to be a beacon during protests, amplifying the BLM message. Ansom agrees, adding that supporting Black Lives Matter is a no-brainer, especially for him.

“I came from France, I spoke no English,” Ansom says. “I was the only white kid out of like 100 ballplayers in the [Fairfax High] gym. The Black community really is the one that embraced me, taught me, and was so open-minded. I [credit] my handle and my whole game to that community. So when [someone’s] like, ‘Thank you for doing this,’ I’m like, ‘Thank you, Black lives, for accepting me as a kid with a basketball dream.’”

When the Hoop Bus isn’t “keeping the troops motivated” during protests as Ansom says, it strolls throughout LA, looking to bring communities together.

Ansom takes the bus on a stroll through the streets of Venice and finds a neighborhood kid on the sidewalk. He asks him to take a shot. Video by Angel Carreras