Every Tuesday, Heleo Leyva and his team prepare 200 meals for residents in East Hollywood. Photo by Danielle Chiriguayo/KCRW

Every Tuesday, an apron-clad Heleo Leyva mans a red hot charcoal grill, where he roasts pounds of marinated carne asada and chicken. Nearby, aluminum trays full of tortillas, rice, beans, pickled carrots and jalapenos lie in wait to be neatly plated into square styrofoam to-go containers.

It’s all for growing lines of locals, stretching down Santa Monica Boulevard, right around the corner from LA City College in East Hollywood.

Welcome to Community Cookouts, where Leyva and a team of experienced chefs and volunteers cook and distribute meals for residents in need. Since August, the team has distributed more than 2,000 meals.

“A lot of the food that they get from banks is in cans and all that. It is not so great. So I said … I'm going to do something that is totally crazy, something that nobody has done,” says Leyva. 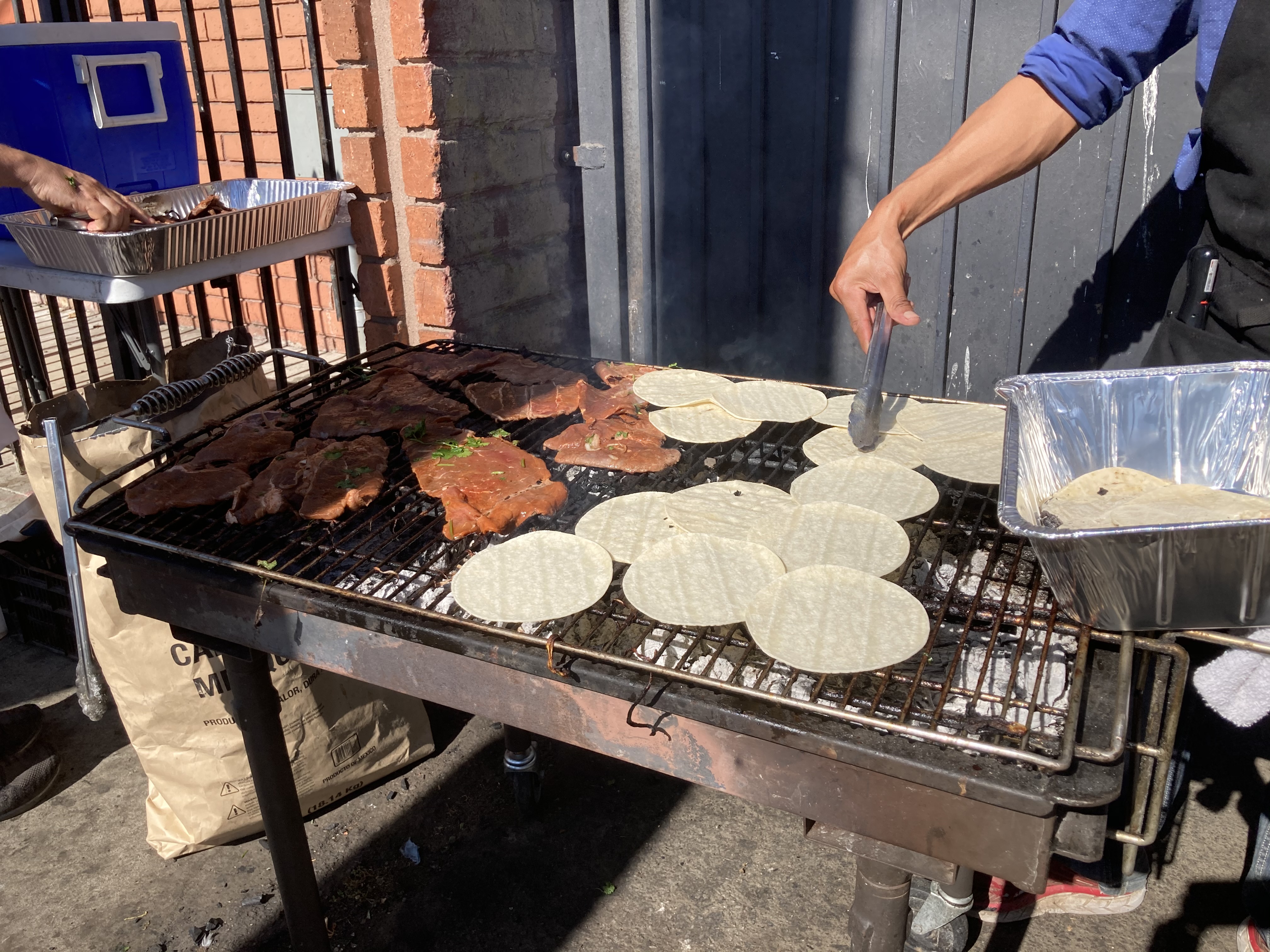 The free plates include freshly grilled meat, such as carne asada. Photo by Danielle Chiriguayo/KCRW

Like most stories nowadays, this one starts with a pandemic pivot. Before COVID-19, Leyva and his brother Filimon operated Quesadillas Tepexo. It was a street food stand that sold quesadilla, made from homemade, blue corn tortillas, fresh salsa, and grilled mushrooms, nopales, and calabacitas.

He’s referring to $1000 fines from the City of Los Angeles, aimed at unpermitted vendors caught selling food on the streets. It was instituted during the early days of the pandemic to help curb the spread of coronavirus. Leyva didn’t have a permit, and he couldn’t afford to risk selling food.

Pre-COVID, Tepexco had just started to turn a profit. Now it was toast.

So Leyva turned to what felt natural to him. He used his skills to help those in need in his community. For the last 20 years, he’s lived in East Hollywood.

His efforts turned into the first iteration of Community Cookouts. He sold quesadillas for $5 each, and for every purchase, he gave away one to someone in the neighborhood. The Leyva brothers helped pay for it through GoFundMe, which has raised more than $6000 so far.

But eventually, Leyva started seeing something else on the streets.

He said forget about the five bucks: “We found people who were not necessarily living on the street, but they were just people who were in need. And sometimes they will say, ‘Do you have work or some extra tasks? Just a little bit of work?’ I said, ‘I don’t have any work for you, but I can give you food.’”

He saw that it wasn't just unhoused people or those in shelters who were hungry. His neighbors also couldn’t afford a bite to eat.

“This is something that is part of Community Cookouts: Street vendors helping the community because we are up there on the street, and we can see the need that exists in our communities,” Leyva says.

Today, Leyva runs a tight operation alongside his brother, volunteers, and LA’s chefs. That includes Zara Bloom of Care Packs LA, a grassroots organization that distributes free hygiene kits filled with wet wipes, face masks, and hand sanitizer. Daniel Mattern, co-owner of Friends and Family, also volunteers at Community Cookouts every Tuesday. He supplies the grill they use on-site.

He points to the gentrification that’s widened the socioeconomic gap in East Hollywood. Take the Erewhon Groceries that just opened nearby, for instance.

“One of the most expensive grocery stores in Los Angeles just opened up like five blocks from here, which is fine,” Mattern says. “But it just points out that there's a lot of disparity. You’ve got hungry people and people who can afford to spend a lot on food.”

Erewhon Groceries, where a vegan burrito costs more than $15, attracted crowds on opening day. Meanwhile, Community Cookouts down the street usually runs out of food within the hour it opens. 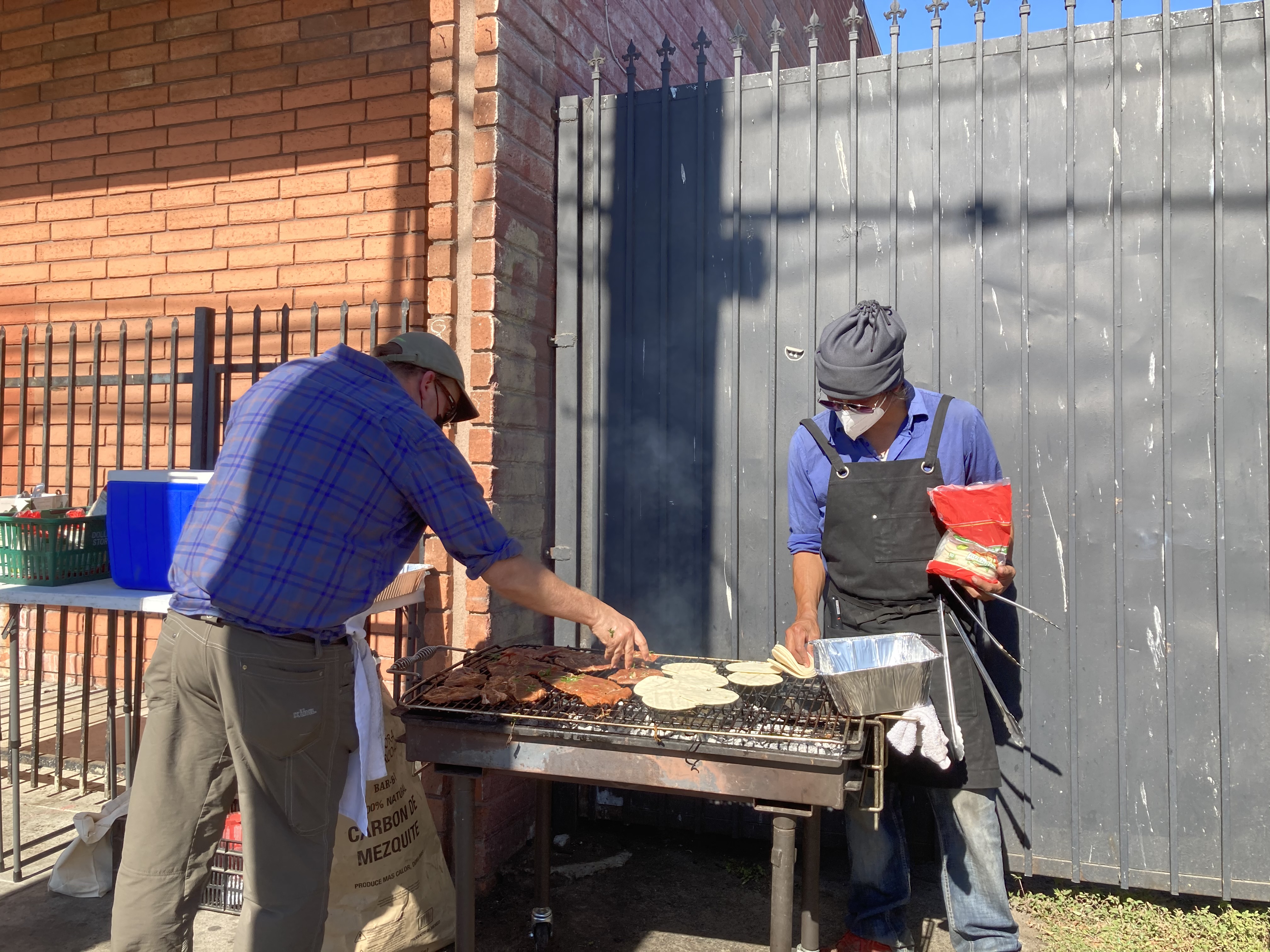 Heleo Leyva and Daniel Mattern often man the grill during the cookout. Photo by Danielle Chiriguayo/KCRW

The stand has grown a regular following in the neighborhood. That includes Doris. She told KCRW she wasn’t comfortable sharing her full name. She says Community Cookouts is a place she feels safe to find help, and that there aren’t people there who want to hurt her or others.

Since last August, Doris and her family have lived out of their car. She was evicted from her apartment after 20 years. The building’s landlord raised the rent, and she soon found out they couldn’t afford to make payments.

One day while visiting her daughter at a low-cost hotel across the street, Doris saw another project managed by Leyva: the East Hollywood Community Fridge. It’s there where anyone can drop off fresh fruits and veggies, pre-packaged meals, and bottled water. Today, more than a dozen of these community fridges are scattered across LA.

Aftering walking over to grab some water, Doris later saw Leyva and his crew giving away hot meals. She thanks god for the unexpected help.

As Leyva explains it, he set up the fridge to distribute food without contributing to feelings of shame. 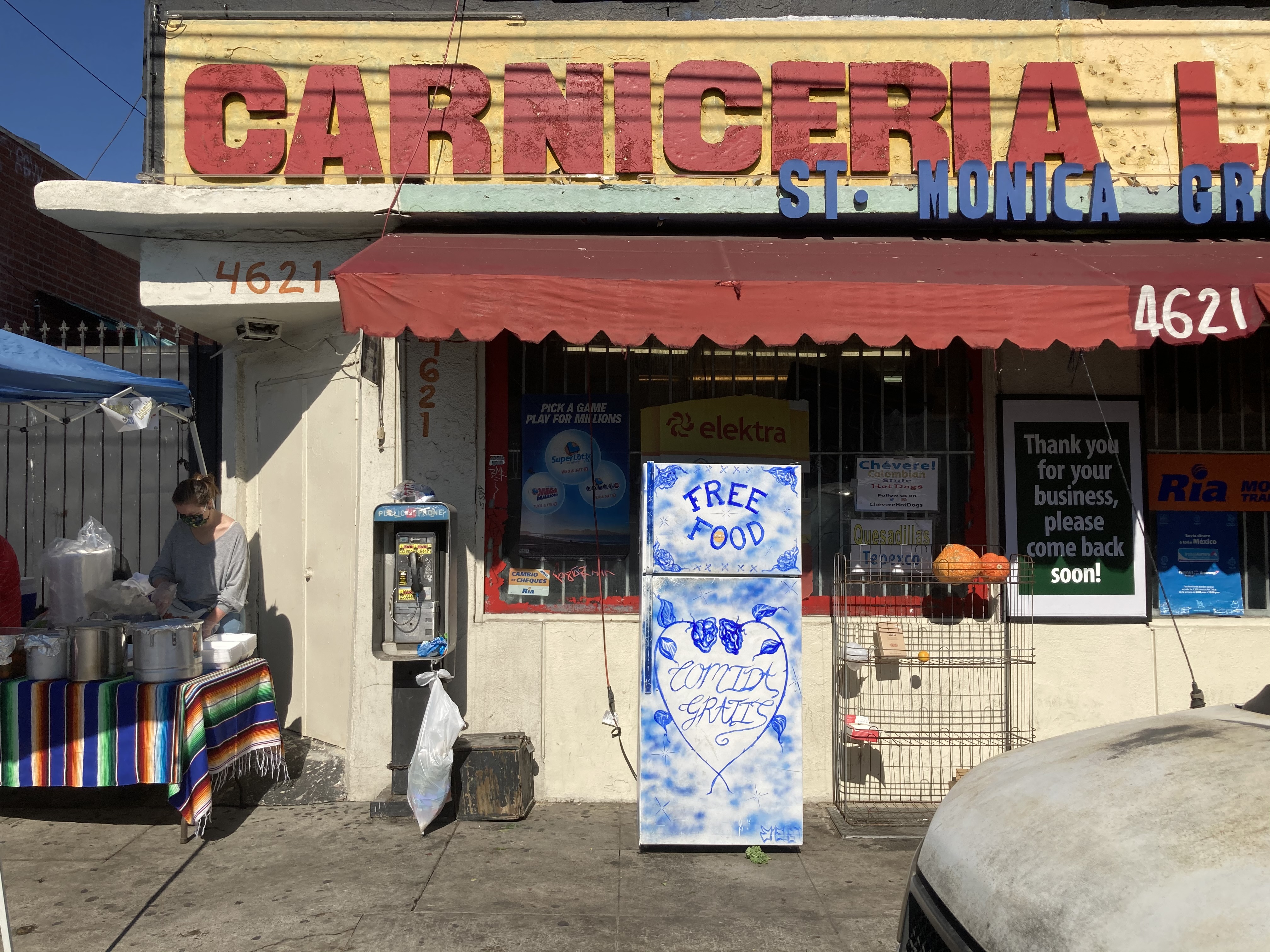 Dozens of community fridges, filled with free food and water, are managed across LA. Photo by Danielle Chiriguayo/KCRW

“This guy said in the last week he had only been eating rice and beans because he didn’t have anything to eat,” Leyva says. “That made us realize that a lot of people don’t come to us for food because they feel so ashamed of themselves, especially in the Latin community. … That made me realize … what if we set up a fridge where nobody has to ask anyone or fill out a form or any of that stuff, and just get food?”

Growing up in Tepexco, Mexico, food was a way he could connect with ancestors and Aztec traditions of reciprocity.

“Feeding or helping your communities, it’s part of a very strong bond that exists in the native culture. ... It's part of your being. … It's not a hobby, it’s something for your essential survival,” Leyva says. 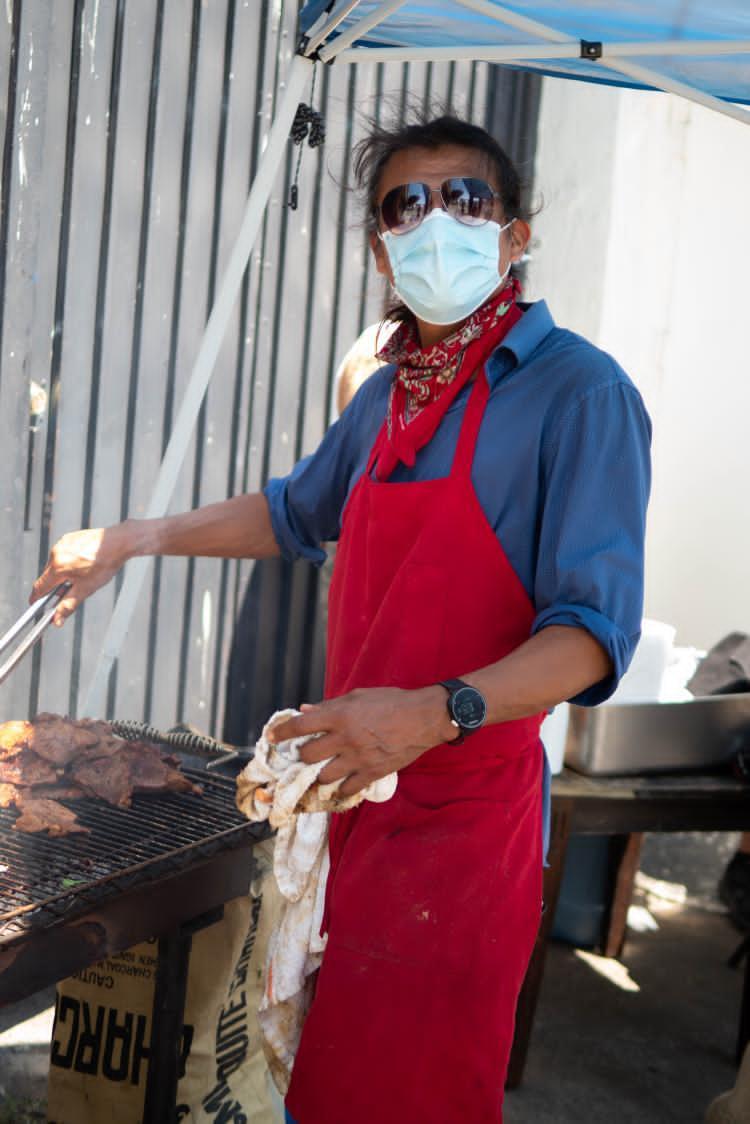 To help support himself, Leyva does part-time consulting work. He also volunteers as a lead gardener at the East Hollywood Community Garden. It’s a way to make use of his two degrees, one in business finance and the other in human resources. He uses some cash from his GoFundMe to help pay for his apartment, but he isn’t able to pay other bills, like his internet, which was recently shut off.

He hopes to turn Community Cookouts into a non-profit, to apply for grants or other sources of funding.

But for now, Leyva is focusing on expanding the operation, helping organize new Community Cookouts up in Fresno and in Reno, Nevada.

*An older version of this story incorrectly said Leyva works as a lead gardener at the East Hollywood Community Garden and does consulting work on the side.

Every Tuesday, an apron-clad Heleo Leyva mans a red hot charcoal grill, where he roasts pounds of marinated carne asada and chicken.

With wave pools on the way, the desert around Palm Springs could be SoCal’s next surf spot

Not far from the Palm Springs Airport is a bygone oasis. In 1986, the Oasis Water Park opened, and for decades you could hear people laughing and screaming as they rode...

Genia Ahranian doesn’t know what she would do without her daily trips to the dog park.