Lance Alspaugh, the owner of the Los Feliz 3 movie theater, says he’s had to dip into rainy day funds to help keep his businesses afloat. Photo by Waltarrrr/Flickr.

Six months have passed since the COVID-19 shut down everyday life in Southern California. Over that time, public spaces, businesses, and schools started closing, while people started getting sick and dying from the mysterious virus. KCRW checked back in with a bakery owner, local theater owners, and some high school students on how they’ve fared since the pandemic upended much of their lives.

Back in March, Deanna Ductoc, the owner of Los Angelitos Bakery made a pledge to the students of Los Angeles: she would give out free pan dulce — Mexican sweet bread — to kids 13 and younger until they were back in school full-time.

Six months later, Ductoc is still holding true to that promise. Her bakery’s been in the neighborhood for nearly 30 years, and she says it’s her duty as a community business to provide a familiar place during difficult times.

“For a lot of people in our community, being able to walk down the street or come around the corner and grab a pan dulce, [is] something that they've shared with their grandparents or with their parents,” Ductoc says. “With the pandemic and everything that’s going on in Southern California with a lot of the protests, I feel like a lot of people can come in and kind of find a happy place.” 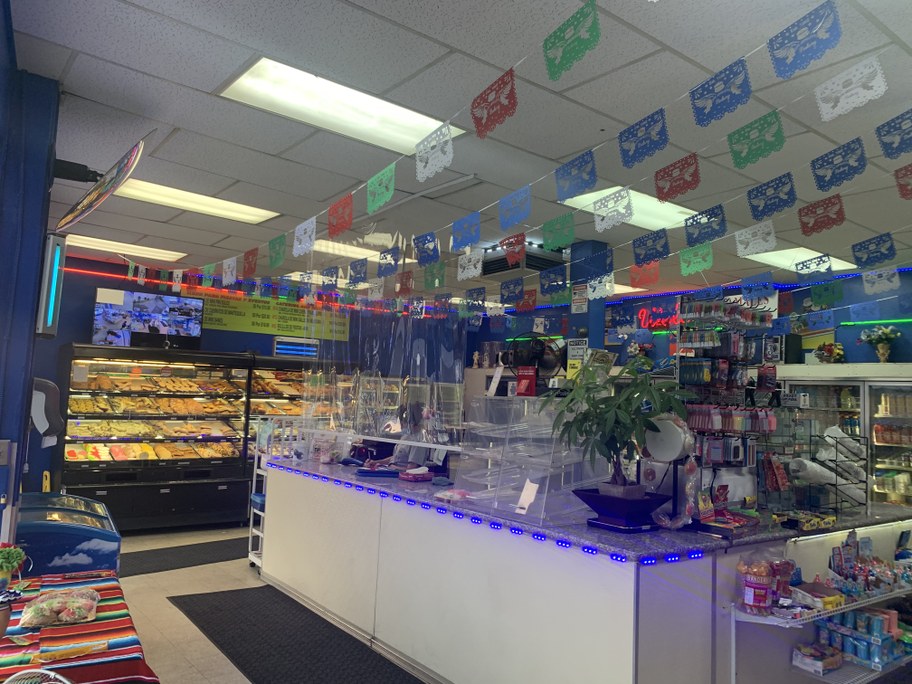 Despite concerns at the onset that the program might be financial risk, Ductoc says the program has been cost-neutral. The pan dulce typically picked by kids cost anywhere between $.30 and $1.30, and when families do come in, they buy a bottle of water, some milk, or extra pan dulce.

Business at the bakery has been unpredictable, but Ductoc says her team is handling it the best way possible: together.

“Our entire family at the bakery — we've been doing pretty well making sure that we rise up from the lows, and we kind of ride this roller coaster out together,” Ductoc says.

CONGRATULATIONS @weird_mel_ 💙 . This pandemic has created some challenges for many families, especially students who’ve transitioned to virtual learning 💻📚 . As a community we came together to fundraise & giveaway a Free ASUS Chromebook with Microsoft 365 bundle to a deserving student✨ that was nominated by Huntington Park High School & selected by your family here at Los Angelitos Bakery💙 . It was the best feeling to see the joy (through the masks) of Melanie and her mother! 🤗💙 . Thank you so much @hphsspartans @hpspartanshield @cityofhuntingtonparkca @losangelitosbakery & all who purchased a cupcake kit, as well as donated! Could not have done this without you! 💙 . #latina #latino #latinx #brownpride #community #huntingtonpark #losangelitosbakery #covid #pandemic #giveaway #asus #virtuallearning #onlineeducation #bakery #panaderia #hphs #huntingtonparkhighschool #nationallatinaday #supportlatinabusiness #smallbusiness #supportsmallbusiness #shopsmall #shoplocal #shopsmallbusiness #latinabusiness #latinas

Despite the uncertainty, Ductoc has started to fundraise for local students. That includes raising money last month for one local high school student to buy a new laptop and a subscription to Office 365. Looking forward, she already has plans to start another fundraiser next month.

Last year, Peter Ambrosio and two friends bought The Lumiere Music Hall, the only commercial movie theater in Beverly Hills. Everything was going well for the first-time theater owners. Until the pandemic hit.

“We're staring into the abyss right now,” Ambrosio said. “It's a pretty intense moment for sure.”

He’s now hoping grants and loans can keep the Lumiere Music Hall theater afloat until the end of September — when their lease is up.

Other theater owners struggling through the pandemic-induced shutdown include Lance Alspaugh, owner of the Los Feliz 3 and Vista Theatre, and Greg Laemmle, owner of the Lammle chain of theaters.


The Vista Theatre’s “To be continued…” marquee has been hanging since the beginning of the pandemic.

“Originally, I thought it was going to end in July,” Alspaugh said. “July 31st was the target date. I don't know when it's going to end any more.”

Laemmle was hoping for a summer end to the pandemic, too. He says he’d rather not know how much debt he was in due to these six months of little to no income.

“I'm trying not to look. We're just trying to focus on how do we pay each week's bills? And how do we get to the light at the end of the tunnel,” he says.

To bring any kind of income in, the Laemmle theaters are selling popcorn.

Laemmle and Ambrosio entertained the idea of doing outdoor screenings as drive-ins make a comeback, but the costs didn’t pan out.

Loans, dipping into cash reserves, and hope have kept these movie theaters alive. Despite how bleak their situations look, all the theater owners expressed optimism for the future.

The pandemic hit them right at a crucial moment in their lives-- prom season.

Prom didn’t happen for any of the students we talked to, except Reza Shamji. He was a senior at Brentwood High School and helped organize his prom.

He was upset he couldn’t have that last big dance before college, but he did get an unforgettable graduation. It took place at a drive-in movie theater in Riverside. 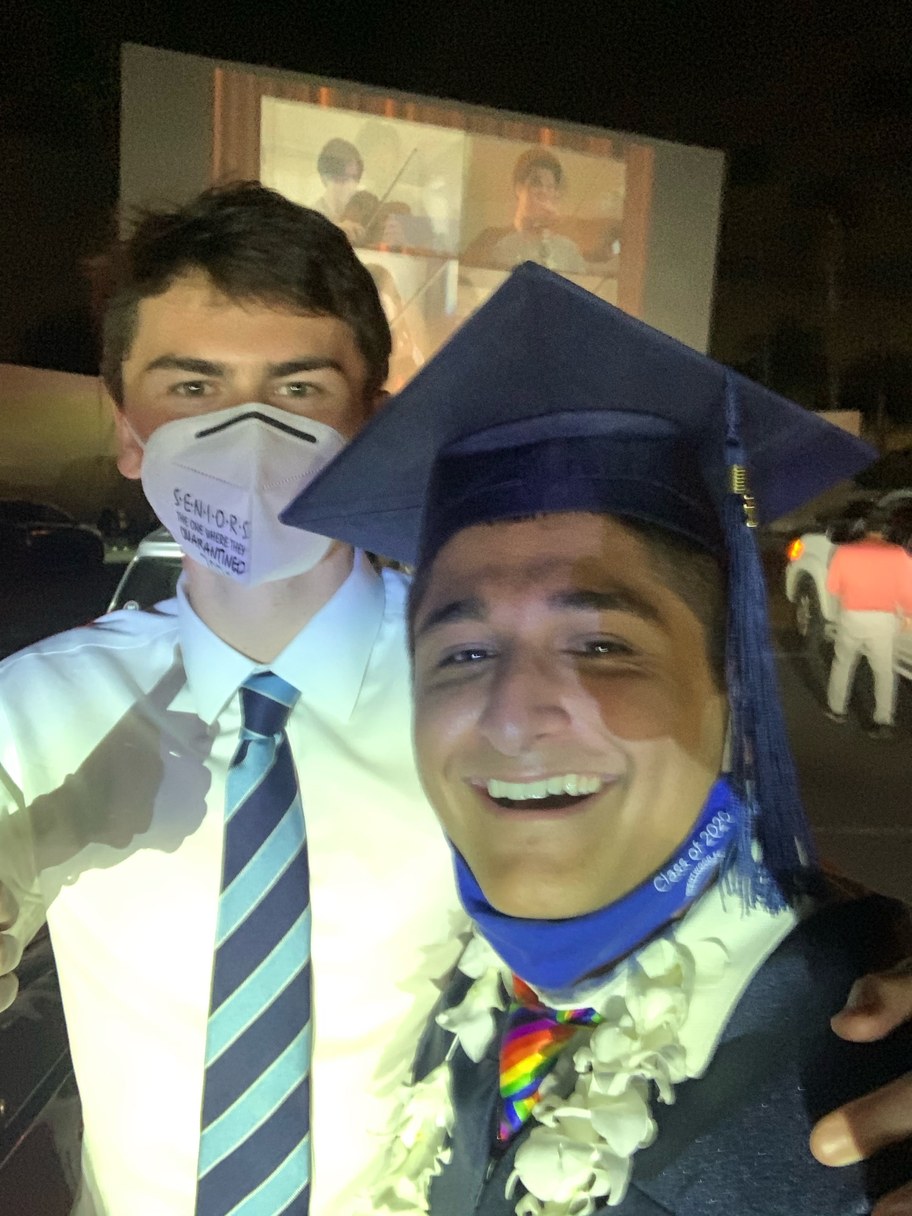 “We drove an hour and a half, two hours away from where we all live,” Shamji said. “It was so awesome. It was a huge area and basically, the speeches, everything were on the stage or the movie theater, like where the screen would be. It was great.”

The pandemic also upended his life in another way. He got accepted into Harvard and Princeton, picking Harvard but decided to take a gap year.

He got into investment banking for a bit and is now working for the Biden campaign for the Texan coalition head for Asian Americans and Pacific Islanders. He’ll head to Harvard next fall.

Ashlee Lewis is another student whose life was anxious back in April.

She was a senior at Long Beach Poly high school. She was headed to Cal State Fullerton on a basketball scholarship. The pandemic hit and the semester went online-only, sports were put on pause.

Today, academics are still online for the fall semester. But good news for Lewis, she found out basketball will be back on campus October 5.

“I feel like we've been waiting for so long just to get any news about going back on campus and playing basketball. But now that it's here, I'm very excited. I'm just, you know, ready for what the future might hold.”

Checking back in with local businesses, high school students six months into the pandemic

Six months have passed since the COVID-19 shut down everyday life in Southern California. Over that time, public spaces, businesses, and schools started closing, while...

Outdoor dining has given a lifeline to restaurants who were unable to serve people indoors during a fast-spreading pandemic. To survive, restaurant owners and managers moved...

‘beautiFOAL’ and ‘Labyrinth’: two new art shows to check out amid the pandemic

Due to the pandemic, art has become mostly a virtual experience and may continue to be so for a while. But there are some shows that are opening up for physical viewing.