The Anaheim Solar One project would be built on a hillside that overlooks this Anaheim Hills neighborhood. Photo by Susan Valot.

A neighborhood in Anaheim Hills is pushing back against a proposed community solar installation on the hillside behind their homes.

The new solar project would be a test of placing community solar in more densely populated residential areas in California, closer to people using the electricity than the desert arrays, but serving more people than rooftop solar panels.

The project would contain 110 rotating solar panels on a couple of acres of a nearly 23-acre plot of privately-owned open space land. Anaheim Solar One, still in the preliminary planning stages, would produce three megawatts of energy, enough to power 2,000 homes.

Some Crown Pointe neighborhood residents are unhappy about the proposed project. They worry about its impact on their views, their property values, and the wildlife that also call this area home.

“We love the area. We love … the seclusion. It’s a little bit troubling what’s going to happen, probably,” says Jan Hoblik, who lives a few doors down from the project site. He regularly goes running on trails where the solar panels would be placed, below a major transmission line that already runs through the hillsides.

Hoblik says he first learned about the project when a neighbor happened to bring it up at a homeowner’s association meeting. Now he wonders what this hillside will look like.

Anaheim Solar One and a spokesperson for the City of Anaheim both declined to comment on the project for this story, saying it’s still in the planning stages. The City of Anaheim is aiming to move away from fossil fuels and become carbon neutral by 2045, a state-mandated goal. This project would be a small step toward that.

The state has offered incentives for projects that in some cases help bring solar to less affluent areas that otherwise might not have access to it.

Neighbor James Zwingman is also concerned. He lives about 50 feet from where the project would be built.

“I thought the location wasn’t the greatest — to put it in right next to all these residential neighborhoods,” he says. “I mean, I do have solar on mine, but what they’re introducing is a kind of industrial solar plant, very large. The units are very tall, around 50 feet. At first we thought they were just small solar panels on the ground, but then we found out more about them and the large scale it is.”

Zwingman, Hoblik and others in the neighborhood have launched a petition against the Anaheim Solar One project at StopAnaheimSolarOne.com. They have gathered more than 140 signatures against it.

Part of the issue is how the neighbors first heard about the project. Someone noticed it on the back of their electric bill and mentioned it at a homeowner’s association meeting. The developers installed a sign at the base of the hill, one neighborhood over, but not in the Crown Pointe area. 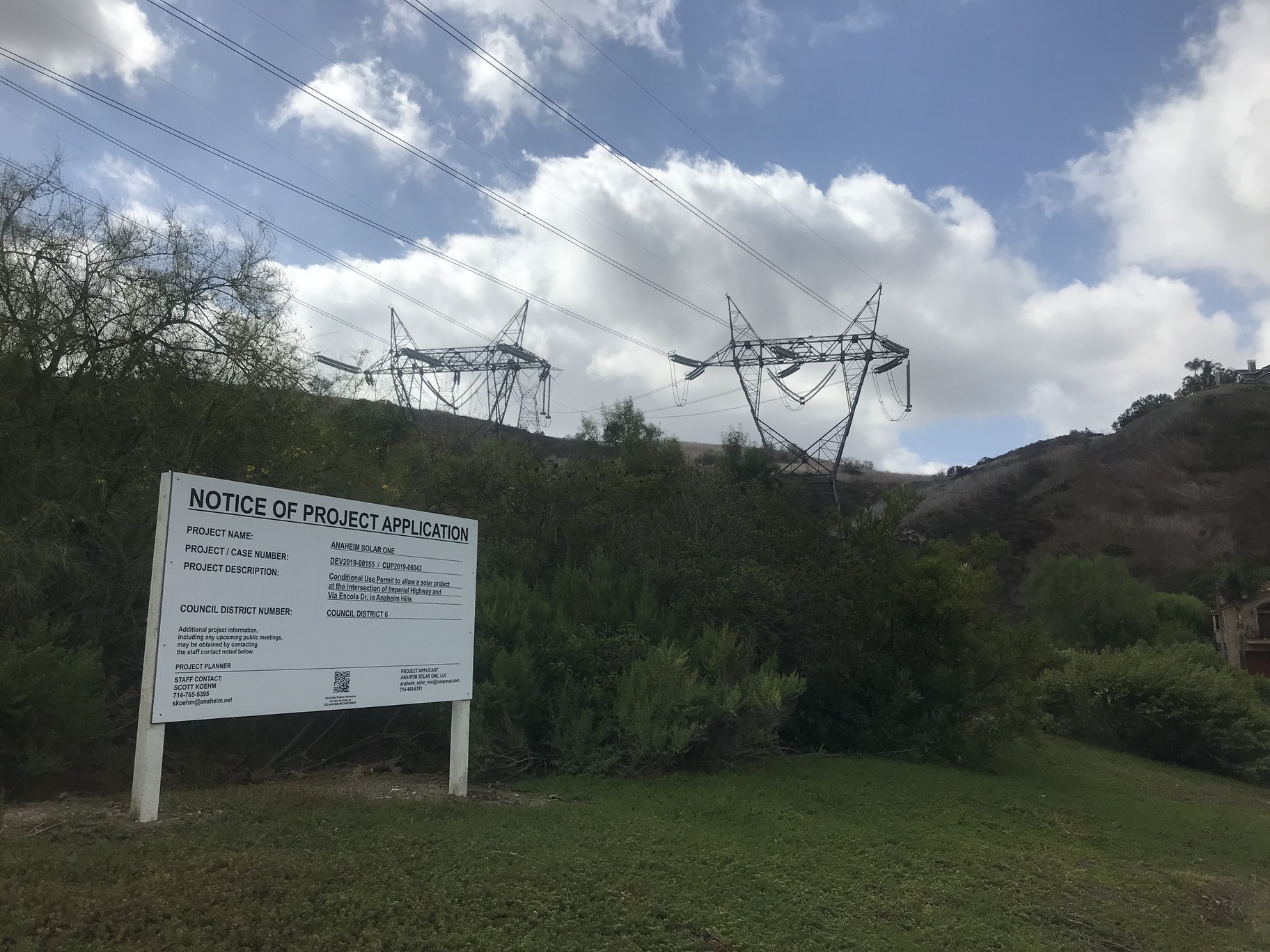 Developers put in a sign at the base of the hillside about the proposed Anaheim Solar One project, but neighbors who live further up the hill said their neighborhood did not get a sign. Credit: Susan Valot.

Poor public messaging can often spark community opposition to new building in a neighborhood, even if it’s an environment-friendly project neighbors might otherwise support, according to Juliet Carlisle, an environmental and sustainable studies professor at the University of Utah.

She studies pushback against renewable energy projects around the country. Carlisle says usually there’s resistance from a smaller, vocal group, like those closest to the project, but it’s often because they’re in the dark about details.

“There’s this sense of the unknown for those who are opposed to it. What will it look like? How will it impact the land? Will I see it? Will it affect my lifestyle or my property value or my view?” Carlisle says.

She says it is unfair to characterize this opposition as NIMBYism (Not In My Backyard) because there are so many factors at play. Scholars have found that people are often against these sorts of projects because they don’t feel it fits the space or environment, she adds.

“Some cases, opposition comes from residents who feel or have this sense that they weren’t being included in the process. So just including people and getting their feedback often is enough to sort of diminish that opposition,” Carlisle says. “They feel heard.”

Zwingman says there’s still so much they don’t know, which is frustrating. He understands the project is still in a preliminary phase.

“That’s one thing that we’re kind of missing is how many transformers? How many? How much noise is it going to make, too? We don’t know all of these things,” he says. “These are all these kinds of questions we would like to ask, and we haven’t really heard much from the developer or any of that to kind of appease our questions and concerns.”

Zwingman and Hoblik both emphasize that they support solar and have it on their own roofs.

“But it also should be kind of hidden,” Zwingman says. “It’s kind of nice it’s on top of houses, so it’s not so ugly or so in-your-face about it. You know, you put it on top of commercial properties and things like that and no one is the wiser. … It’s good for the environment and less polluting and things like that. So that’s the advantage of it. But if you make such a large-scale system, no one is going to want that.”

So far, there is no public timeline for the project.