One of the two infinity pools at Opus. Photo credit: Amy Ta

The house has a name: “Opus.” It sits in the Trousdale Estates section of Beverly Hills, on a cul-de-sac that realtors refer to as “billionaire’s elbow.” Built from the ground up and completed about two years ago, “Opus” looks like a sleek modernist palace with touches of Versailles — 20,000 square feet of glass, marble and bronze accents.

It’s one of several so-called “giga-mansions” for sale in L.A. County at a discount after sitting on the market for months or even years. “When this house was first finished,” said Nile Niami, the project’s developer, “it was a different world in the marketplace.” 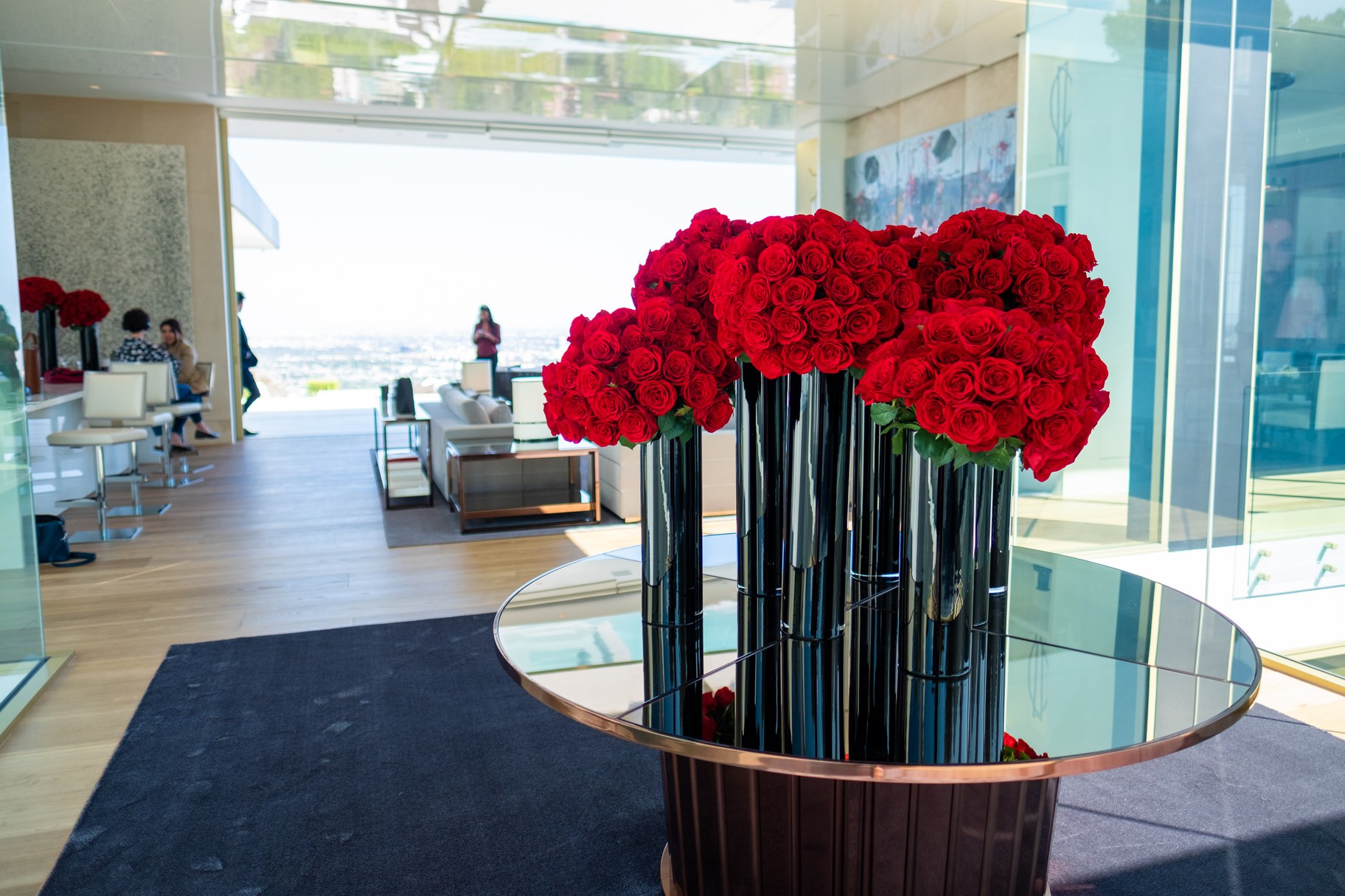 The view when you enter Opus. Photos by: Amy Ta. 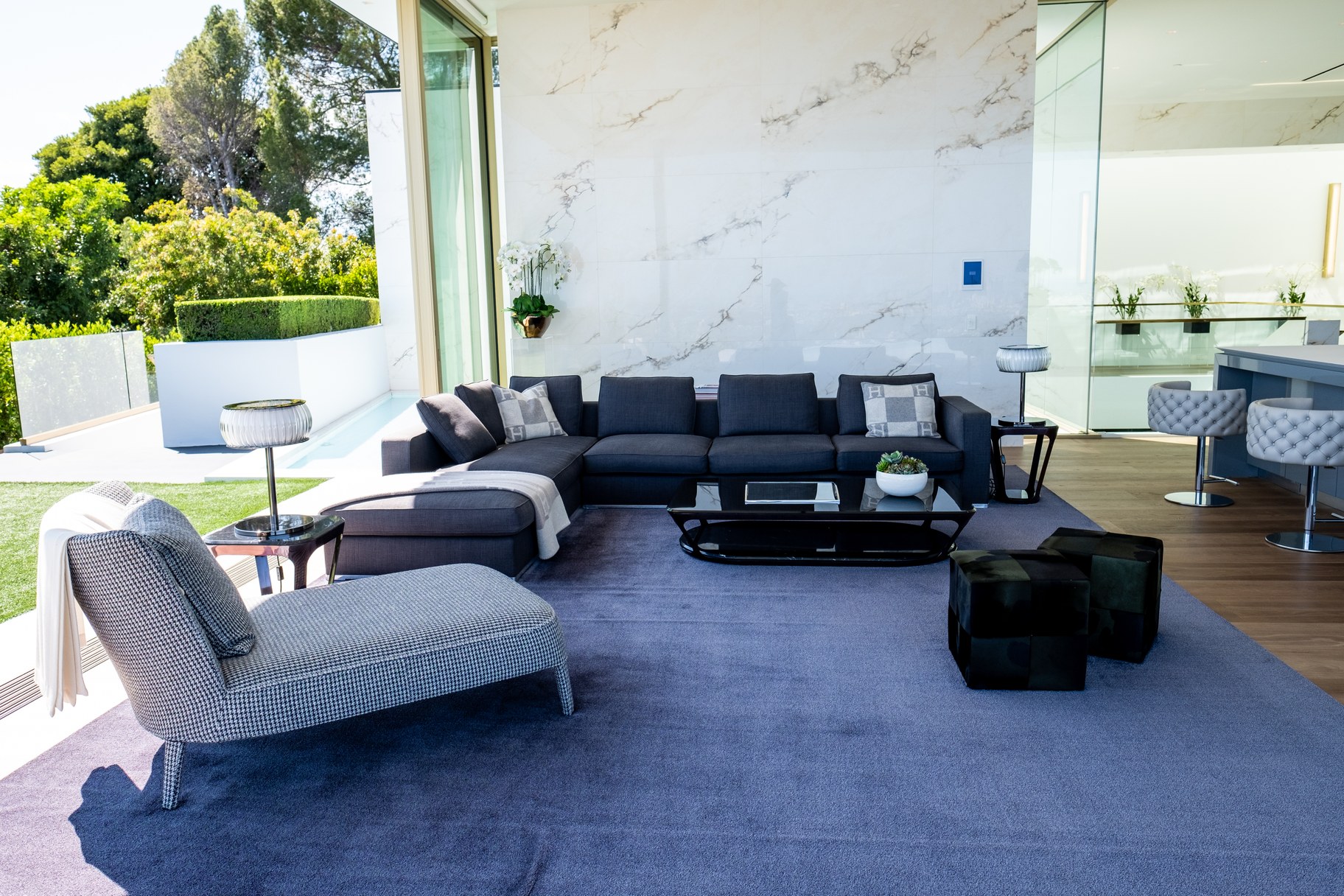 A lounge area next to the patio and kitchen.

Originally, “Opus,” which KCRW’s DNA visited last year, had an asking price of $100 million. That included not only the house but a gold-colored Rolls-Royce and matching Lamborghini. A promotional video for the property featured nearly naked models covered in gold body paint writhing around the infinity pool. But now the party has ended. The property no longer includes the cars, and the price has been reduced to $59 million. 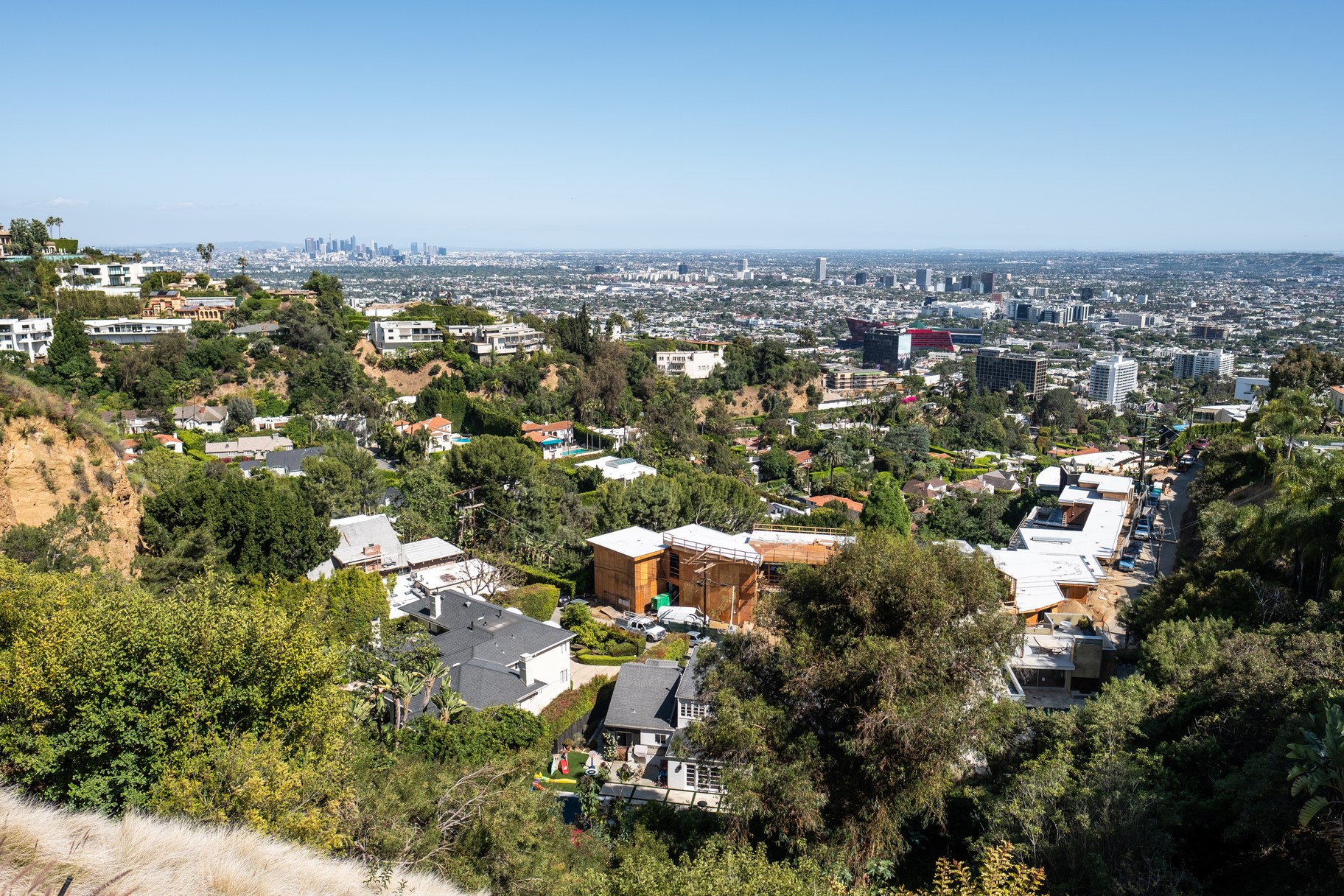 The view from the pool patio.

Even car-less, Opus is a study in opulence. On the ground floor, glass walls recede into marble panels with the press of a button, opening to a poolside patio with views from downtown to Century City. Off the kitchen, a champagne cellar the size of a walk-in closet is stocked floor-to-ceiling with gold-colored magnums of Cristal, and a gold rolling ladder to reach the highest shelves.

On a recent afternoon at the house, Niami -- the developer -- laughed when asked what the vision for it was. “I don’t know, man,” he said.

The real estate agent handling the listing, Rayni Williams, had a more specific answer: “rich bronze warmth” is the home’s theme, she said. 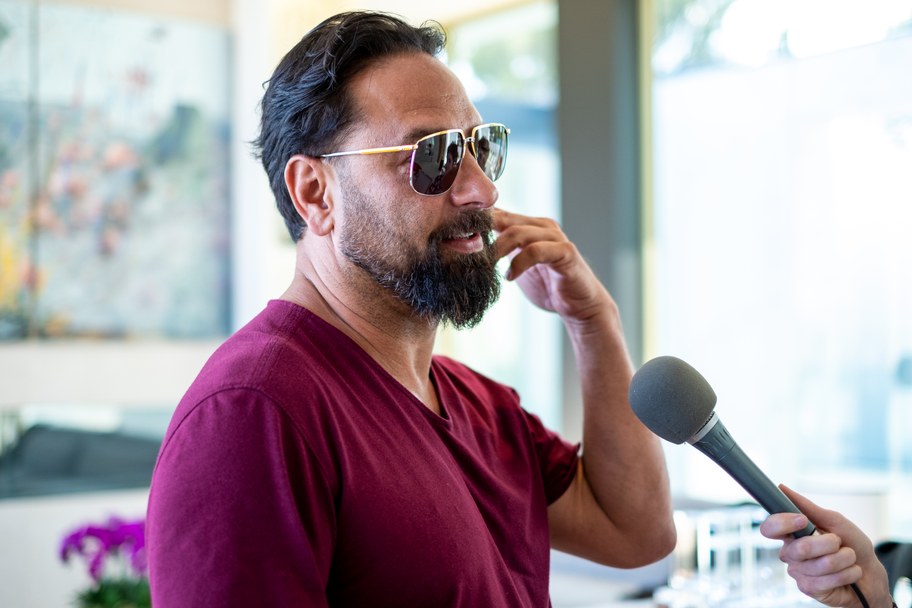 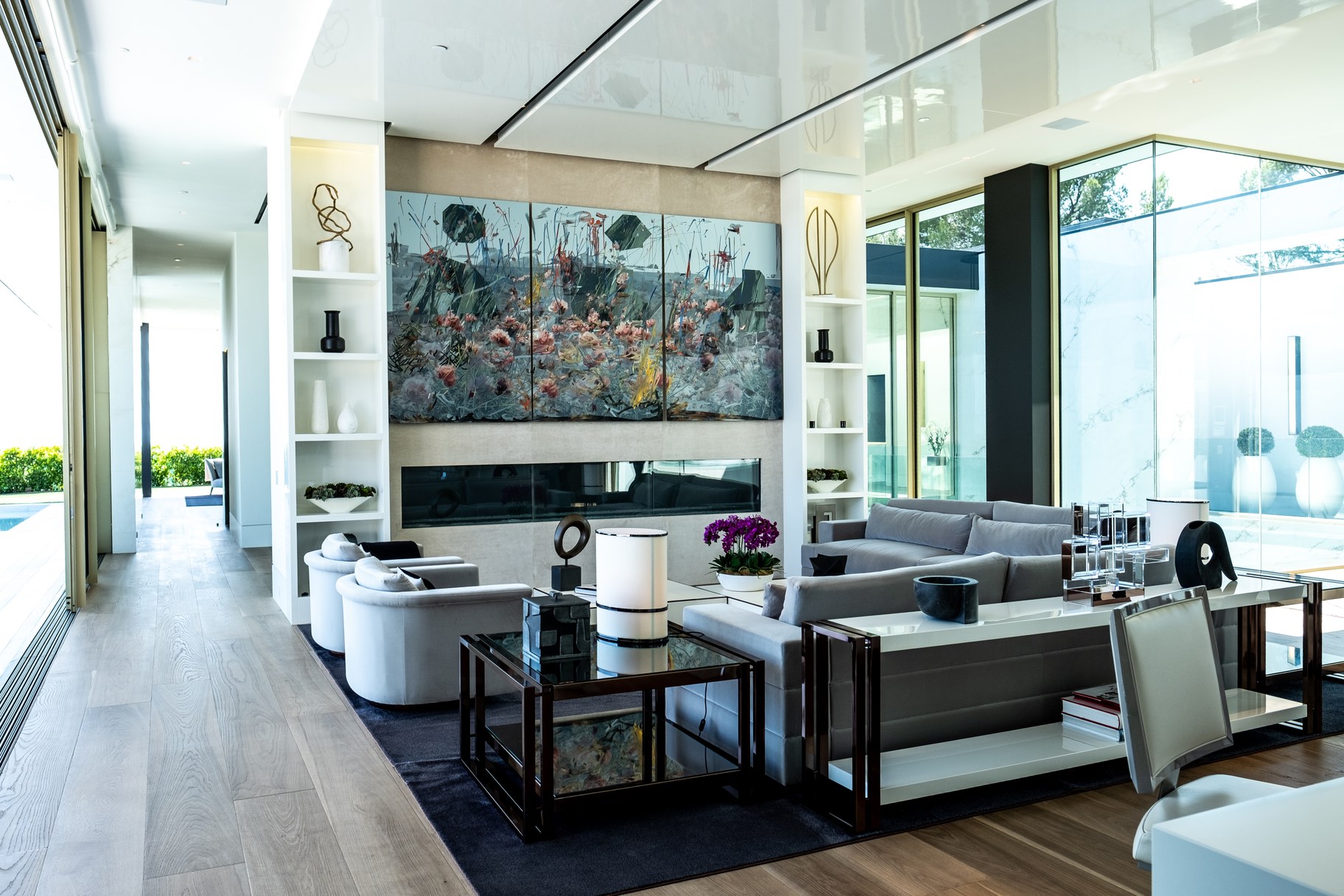 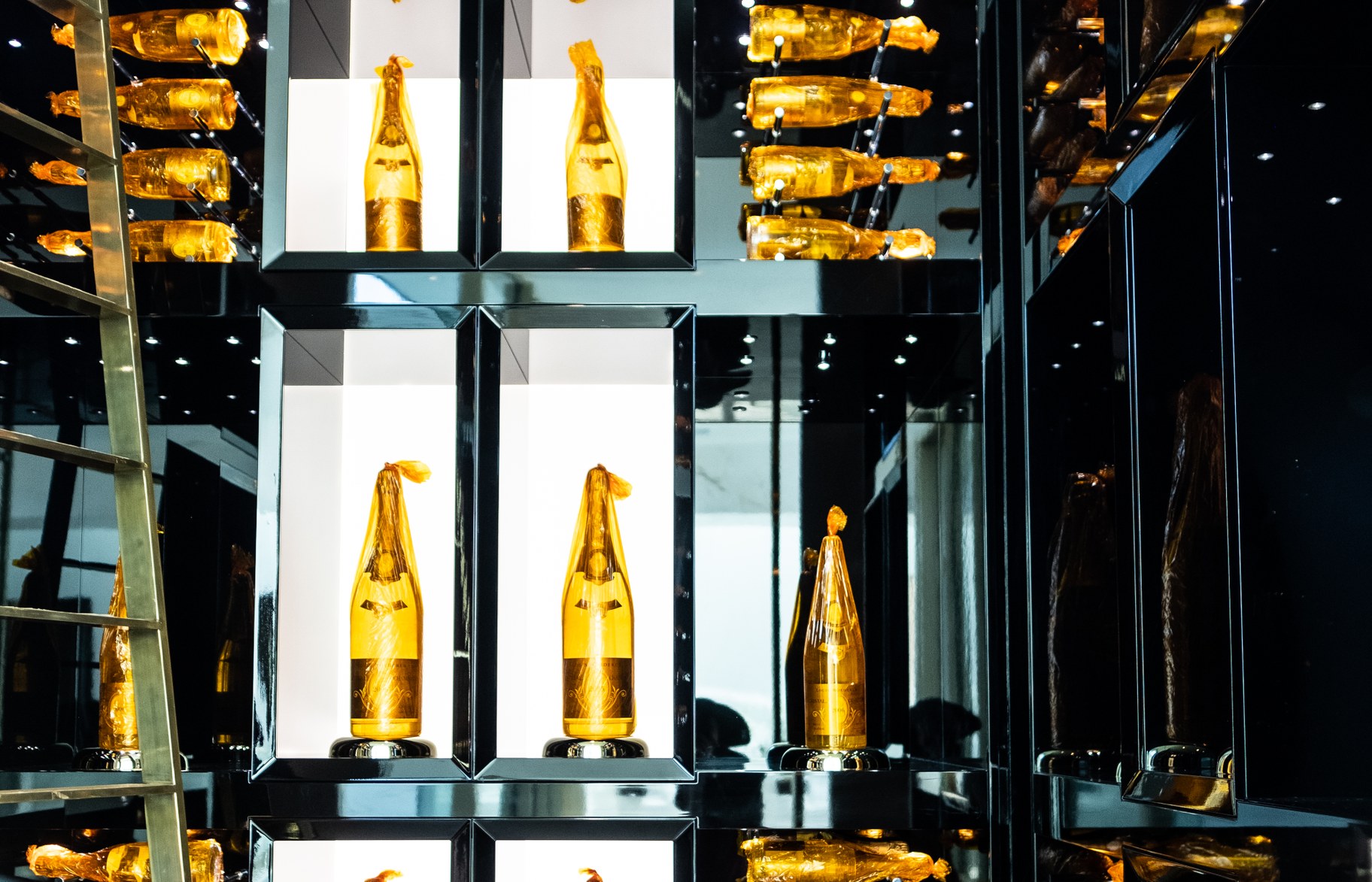 The champagne cellar with a gold ladder. 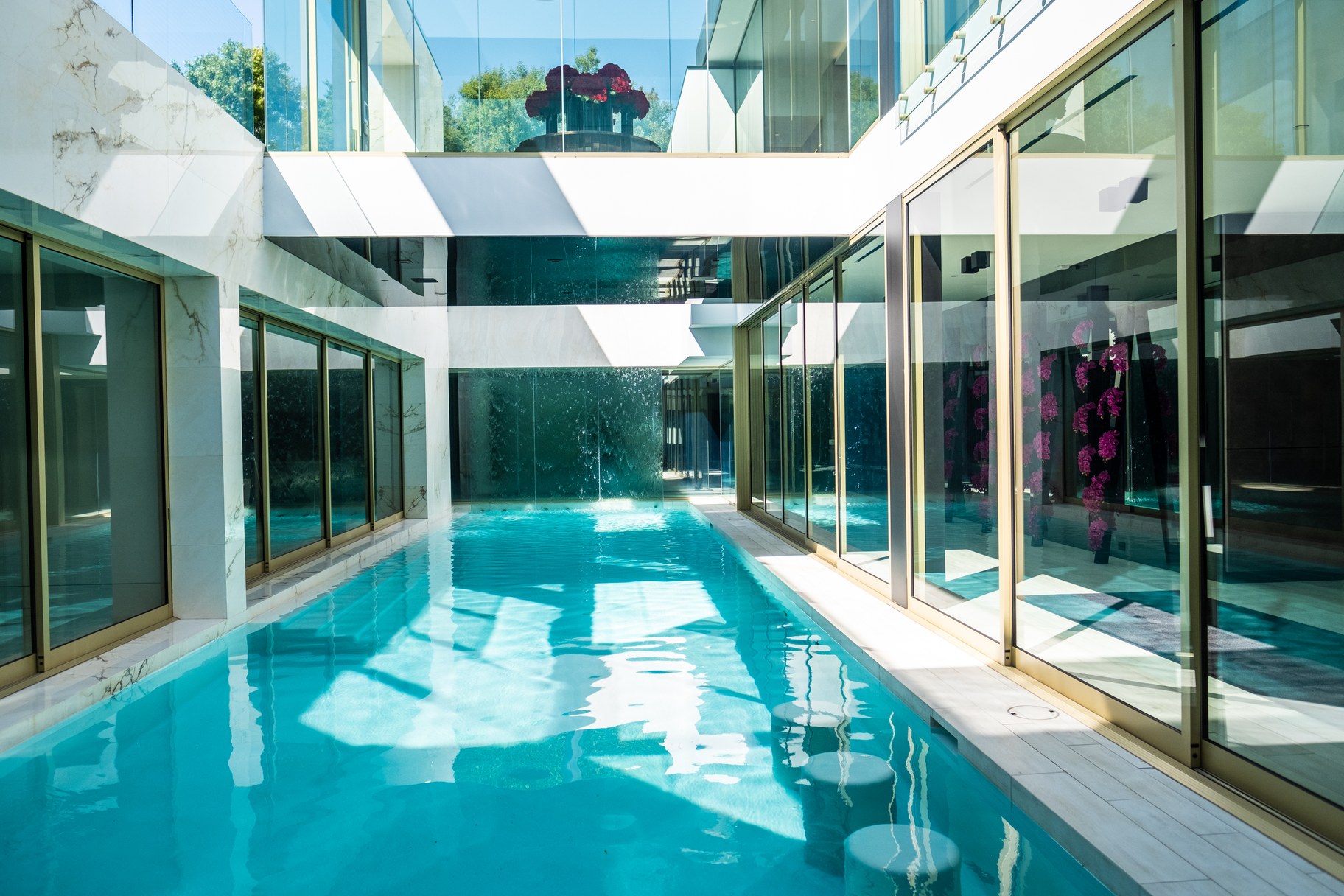 The infinity pool at the basement level.

Downstairs, on the basement level, amenities include a second pool, situated in a kind of glass-enclosed courtyard at the center of the home. “That’s considered your indoor pool,” said Williams. “Triple osmosis.” There’s also a wine cellar (“Opus” comes with a staggering amount of alcohol), a beauty salon, and large bubbling fish tank (“a crystal aquarium,” Williams clarified.)

Niami says he spent approximately $30 million to build “Opus” and admits that he overpriced it at first, partly because the house next door had previously sold for $70 million. That one was also built on spec by another giga-mansion developer, Bruce Makowsky. 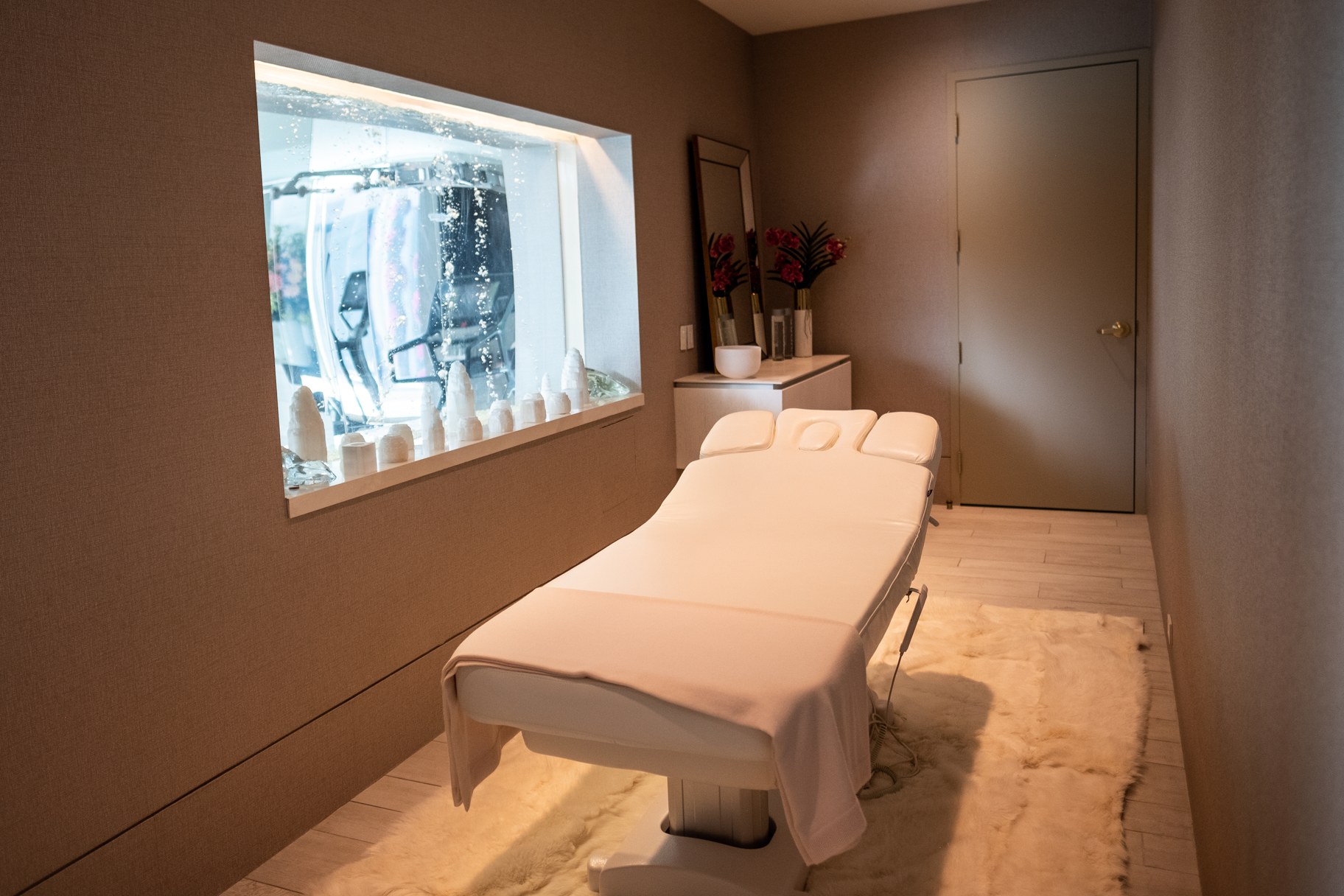 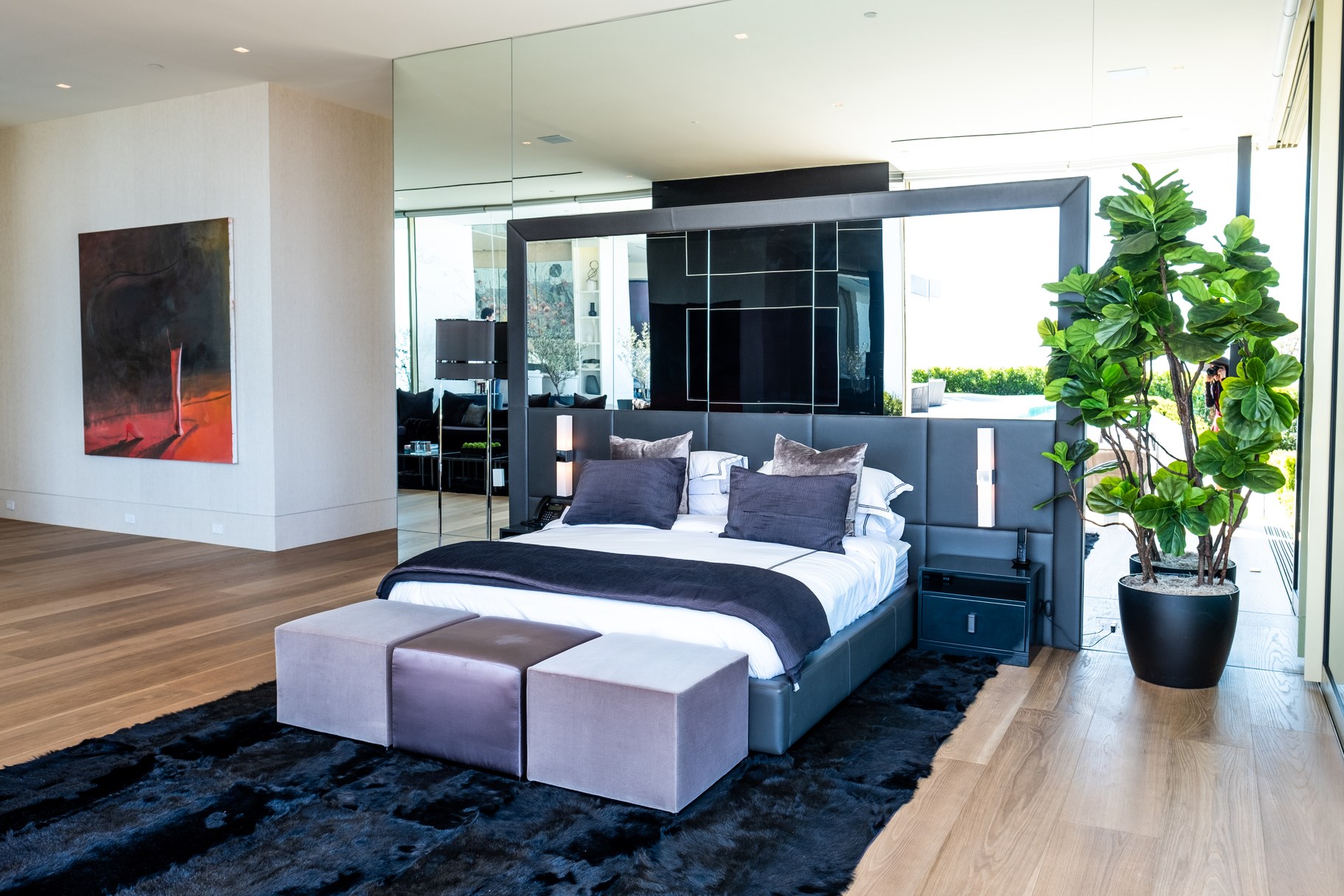 One of the many bedrooms at Opus. 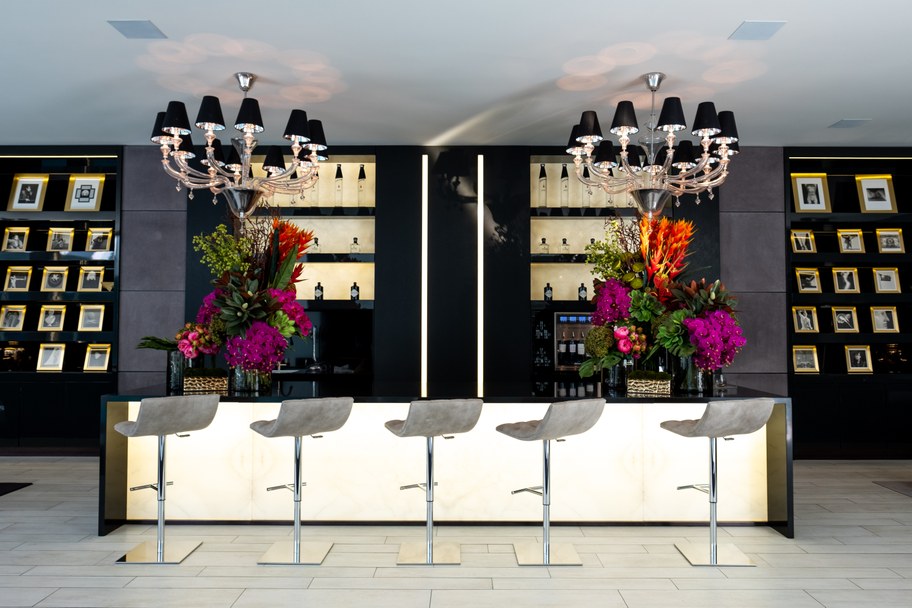 A bar with lots of alcohol within the house.

There’s no strict definition of giga-mansion, according to David Kramer, executive vice president at the real estate brokerage Hilton & Hyland in Beverly Hills, which specializes in luxury listings and where Williams also works.

“You went from McMansions, which were big homes on small lots, [to] mega-mansion in the ‘80s and ‘90s,” he said. “And then we hit giga-mansions in the aughts.”

Generally, these properties are at least 20,000 square feet and sit on large lots, Kramer says. But giga-mansions are also distinguished by lavish amenities like champagne rooms, bowling alleys or in-home beauty salons.

LA’s original giga-mansion was probably “The Manor,” a 56,000-square-foot, French chateau-style home built in 1988 by TV producer Aaron Spelling, famous partly for its three gift-wrapping rooms. At the time, Kramer says, The Manor was an anomaly. “When it was built there weren’t enough builders in the residential market to build a house this big,” he said. “So they brought in a commercial architect and a commercial builder.”

Now, however, there are several Los Angeles developers specializing in these luxury compounds. Among the most well-known are Niami, Makowsky (the man behind the $70 million house next to “Opus”) and Scott Gillen (known for his Malibu homes). The three were even profiled together in the Wall Street Journal last year, along with plastic surgeon-turned-developer Raj Kanodia, for all having projects on the market at the same time. So what prompted this boom in extravagant homes? In short, the rich getting richer.

“The rich are building bigger mansions because they have more money,” said Robert Frank, an economics professor at Cornell University who has written about the giga-mansions of Los Angeles. “If they paid more in taxes they would have less money.”

Despite the billions of dollars sloshing around the tippy top of the income pyramid, however, there are signs of a giga-mansion glut in Los Angeles. Of the 20 most expensive listings in Los Angeles County from this time last year, nine have sold, according to property records. The rest appear to have been taken off the market or reduced significantly in price. The Manor, for example, was listed by its current owner -- British Formula One heiress Petra Stunt -- for $200 million but has since been marked down to $160 million.

None of the brand new projects by Niami, Makowsky, Gillen and Kanodia detailed in the Journal last year have sold either. Makowsky’s latest, a Bel-Air mansion named “Billionaire,” was originally listed for $250 million but is now asking $150 million.

Even when these kinds of properties do sell, there’s evidence that sellers at the top of the market might be overestimating their properties’ values. Of the roughly 40 sales above $30 million in LA County since 2010, none have gone for more than list price, according to Erin Kennelly, executive director of research for the real estate firm The Agency.

“Everything in that part of the market…is going for under ask, and a lot under ask,” said Kennelly. “There’s a lot of things that are 20 or 30% under.”

That said, properties are still changing hands in Los Angeles for enormous sums of money, like the $45 million spec mansion and neighboring $7.2 million home that sold in Bel-Air earlier this month to the same buyer. Also, eye-popping prices are sometimes a marketing strategy in this sector of the market. “You’ll come out with a price that’ll make a splash and gets attention worldwide,” said Kramer of Hilton & Hyland. “I don’t know that there’s a real expectation that it’s gonna sell for that price.”

Marketing could be the explanation for the $500 million price tag on Nile Niami’s next project, a 100,000-square-foot behemoth on a Bel-Air hilltop that he calls “The One.” Still under construction, “The One” sits on three acres and features 20 bedrooms, a half dozen pools including one designed like a moat, a nightclub and a room with fish aquariums for walls.

Like “Opus,” “The One” also made its public debut with a racy promotional video, this time showing a man (presumably the owner) climbing out of a red Ferrari and walking into the home, where a butler immediately hands him a drink and women do yoga on the poolside patio. Niami set off a media flurry by saying he’d list the property for half a billion dollars, but now seems to be backing off that number.

“The number is out there so I don’t think we’re gonna change that,” he told KCRW. “But obviously we’ll listen to offers when they come in.” Despite “Opus” remaining unsold, Niami says “The One” will fetch top dollar.

“The One is a totally different animal,” he said. Because of new city rules preventing construction of such large-scale homes, “you can never build it again.”

Still, Niami says, to find potential buyers he’s shifting his focus from billionaires to Fortune 500 companies and may market “The One” as a corporate retreat destination. How quickly it sells and for how much will determine the outcome of a huge gamble on LA’s giga-mansion market. Public records show that Niami paid $28 million for the land and took out more than $80 million in loans to build the project. The highest price ever paid for a private residence in Los Angeles County is $110 million.

From giga-mansions to city lots, housing for CA’s richest and poorest

Chances are there’s no infinity pool, champagne room, or crystal aquarium in your future home. It’s hard enough to pay the average rent in LA. So what’s the current state of...