For Edmund Poliks and his family, letter writing started as a way to cope with COVID-19 isolation.

“There's a lot of people who don't have anyone that they're in contact with,” he says. “They're stuck at home, just in this kind of chaotic microcosm of parents having a balanced work and doing remote learning.”

It became a fun way of connecting with loved ones they’d only been able to see virtually.

“You can't eat a letter. You can’t gain sleep from a letter. But you can smile and you can feel like you're not alone in this whole thing,” Poliks says.

That was until the Poliks saw the appointment of Louis DeJoy, the newest Postmaster General. Then they heard the rumors about privatizing the post office.

“The post office is one of, if not the oldest, American institutions. It's not just mail-in ballots, like so much of the conversation is now. It's medicine. It's correspondence. It's how many people purchase the normal goods that they need,” Poliks says.

As it turns out, letter writing is one of the latest COVID-19 trends. And it’s not just about the DIY ethos of the pandemic, boredom, or loneliness.

That’s why the Poliks have doubled down on letter writing, sending off almost a dozen letters to friends and family weekly.

Using #savetheusps, thousands of folks like the Poliks have taken to social media to raise awareness around the struggles the USPS faces. Over the last 10 years, first class mail volume has fallen by nearly 30%. In that same time period, the USPS has lost nearly $70 billion in revenue.

“I don't want to sound like, ‘Oh, we need to do this to save the country.’ But the Postal Service is an example of something that isn't necessarily exciting, but something that is extremely vital to a lot of people,” Poliks says.

That same fear also struck 24-year-old Dani Shangold when she was scrolling through Twitter in August and saw photos of mailboxes stacked up on flatbed trucks.

“I just got this feeling in the pit of my stomach,” she says. “I feel like nothing really fazes me anymore, because we've all been so conditioned by so many crazy events one after the other, but that fazed me for a second. … It was just so out of my mind crazy.”

The nostalgia of getting a letter

Shangold has fond memories of getting letters and other goodies in the mail while growing up.

“People would still send cards for birthday party invitations, and it was really exciting,” she says. “Then you become an adult and you're like, ‘I hate going to get mail’ because … it's just a bunch of junk you don't want.”

Inspired by a friend, Shangold decided to write letters to her pals. She wanted to recreate the joy of getting a letter, while also supporting the USPS.

But then there was the issue of money. In April, Shangold was laid off from her job as a social media coordinator.

“Money isn’t freely at my disposal. I can't just go on to the USPS gift shop and buy a bunch of things that I don't need,” she says.

So she settled upon buying some stamps and sending letters.

“Maybe writing a letter isn't going to, in the grand scheme of things, do much. But we're just going to do what we have to do,” Shangold says. “It's almost just like another notch on the belt being like, ‘Okay yeah, so next order of business in the Armageddon is saving the post office.”

Charlie Brown first wrote to his pen pal 61 years ago today in a strip published on August 25, 1958. 📝 As seen in the strip, Charlie Brown’s struggles with pen and ink cause him to call this friend a "Pencil-Pal." pic.twitter.com/8nrpDClhxP

Find community during a global pandemic

Even without political motivation, letter writing is seeing a renaissance during the pandemic. Coast to coast, nursing homes have put out calls for pen pals, while virtual pen pal exchanges have connected total strangers.

For Lailani Manimbo, a Fullerton-based nurse who saw much of the pandemic firsthand, letter writing has served as a replacement for all the socializing she’s missing out on this year.

She’s a member of what’s called the BTS Army: a group of online fans of the Korean boy band BTS. Before the pandemic, Manimbo had tickets for five different BTS concerts nationwide, and plans for local meet-ups.

So after COVID shut it all down, Lailani tweeted a call for pen pals. It was a way she could connect with her fellow fans. 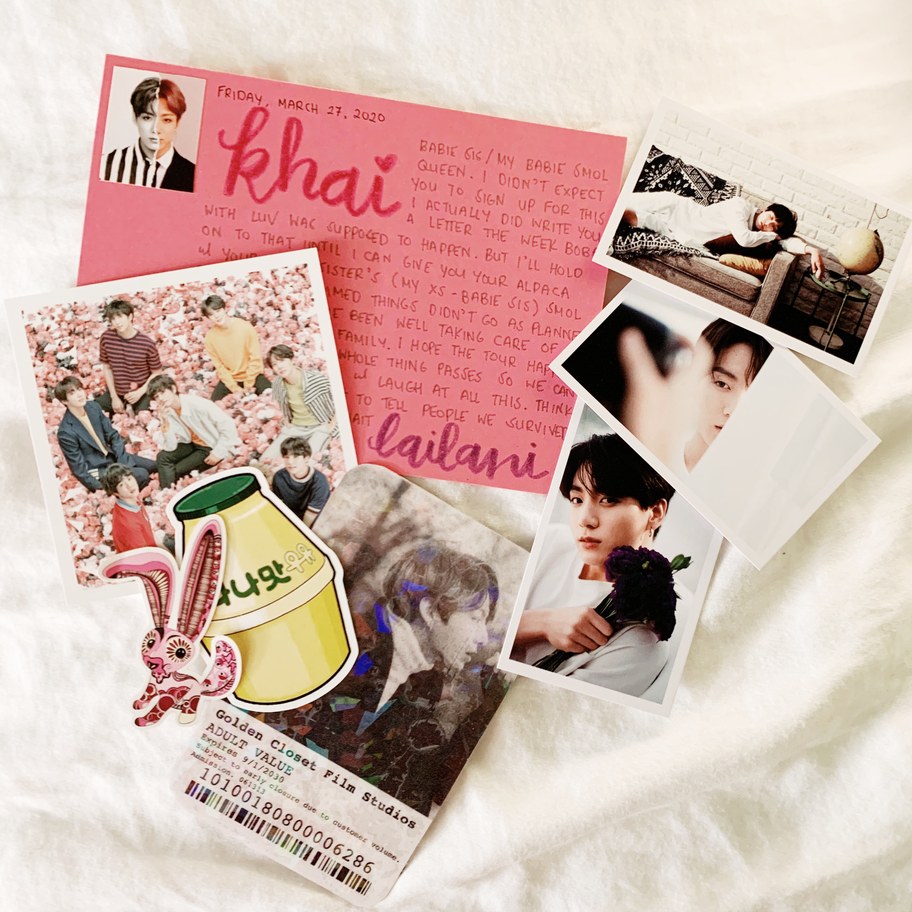 “Honestly, that's been one of my joys this year. … You're dealing with just stress and all, but then you get home and you get these letters,” Manimbo says. “It just comes to show that you have friends that are there at the end of the day, just writing you something to cheer you up or pick you up after a long week.”

Today, she has 15 pen pals from around the U.S. She’s got a whole system to keep her organized: two alphabetized and annotated binders where she can track who she’s sent letters to and when she sent them.

Manimbo knows some of her pen pals in-person, while she met others online. She notes that writing letters, and sharing her thoughts and feelings, has helped them build deeper connections.

“When we receive each other's letters, it's just like a boost of happiness, especially during these rough times this year,” she says. “Writing these letters — it’s a document. It's proof that you existed, that you had a friendship with someone that maybe perhaps lived in a different country or a different state, and yet you still managed to connect with them.”

Letter writing is one of the latest trends to come out of the COVID-19 pandemic. But it’s not just a way to beat quarantine loneliness, it’s also a way to financially...

How long does it take USPS to deliver mail? An experiment with 100 letters

President Trump appointed Republican donor Louis DeJoy as the new postmaster general a few months ago, and since then, changes at the postal service have ramped up. Blue...