How one church became a migrant processing center A boy at Rev. Guy Wilson’s church is one of many asylum seekers who will travel to a relative’s home to await a court date. Photo by Benjamin Gottlieb

Rev. Guy Wilson stands at the head of a long table in his church’s mess hall, linking hands with a group of Central American asylum seekers to say grace.

Children and their parents all bow their heads in prayer before diving into trays full of food: chicken salad tostadas, stewed turkey and pasta with marinara sauce.

“I'm probably one of the first ‘gringo’ faces they get to see that smiles and tells them welcome,” Wilson, the pastor at Our Lady of Soledad Catholic Church in Coachella, says. “Because that's not been their impression of coming into the United States.”

For many of the more than 4,000 asylum seekers that have passed through this church since October, this is the first real meal they have had in days. 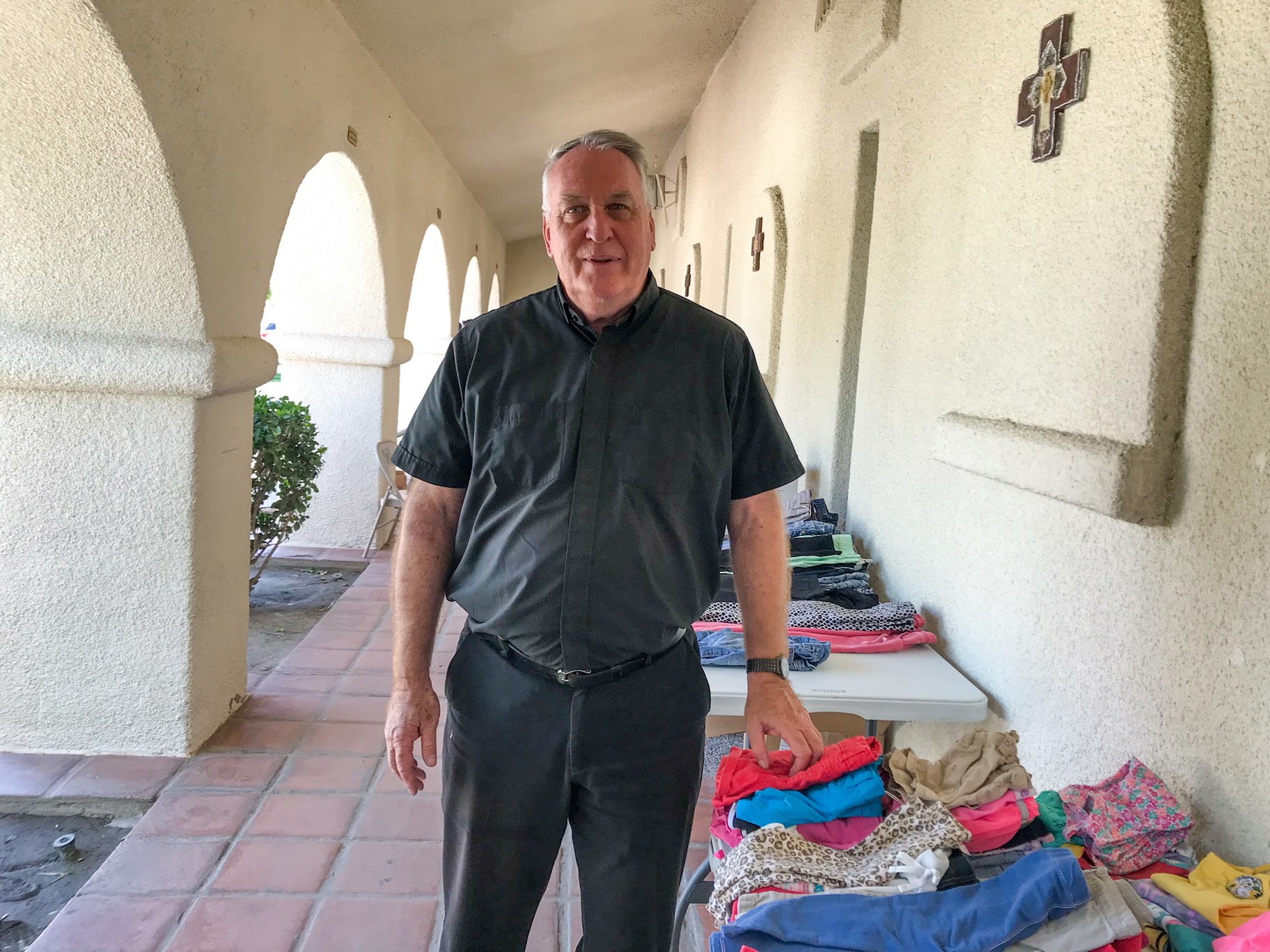 Rev. Guy Wilson poses next to donated clothing for the asylum seekers that arrive at his church. He says his parish has received more than 4,000 people, mainly from Central America, since late last year. Photo by Benjamin Gottlieb

“I had a little bit of money, and I used that to buy little snacks and drinks for my daughter,” says Alberto Xavi.

Xavi left his home in La Union, El Salvador a few weeks ago, fleeing pressure to join a local gang. He made his way through Mexico and crossed the border into the United States, surrendering to Customs and Border Protection.

Now he is awaiting a court hearing on his asylum request.

“We are overwhelmed,” says Carlos Pintones with the El Centro Sector Border Patrol. “We have to find a different tactic or different way of handling the volume.” 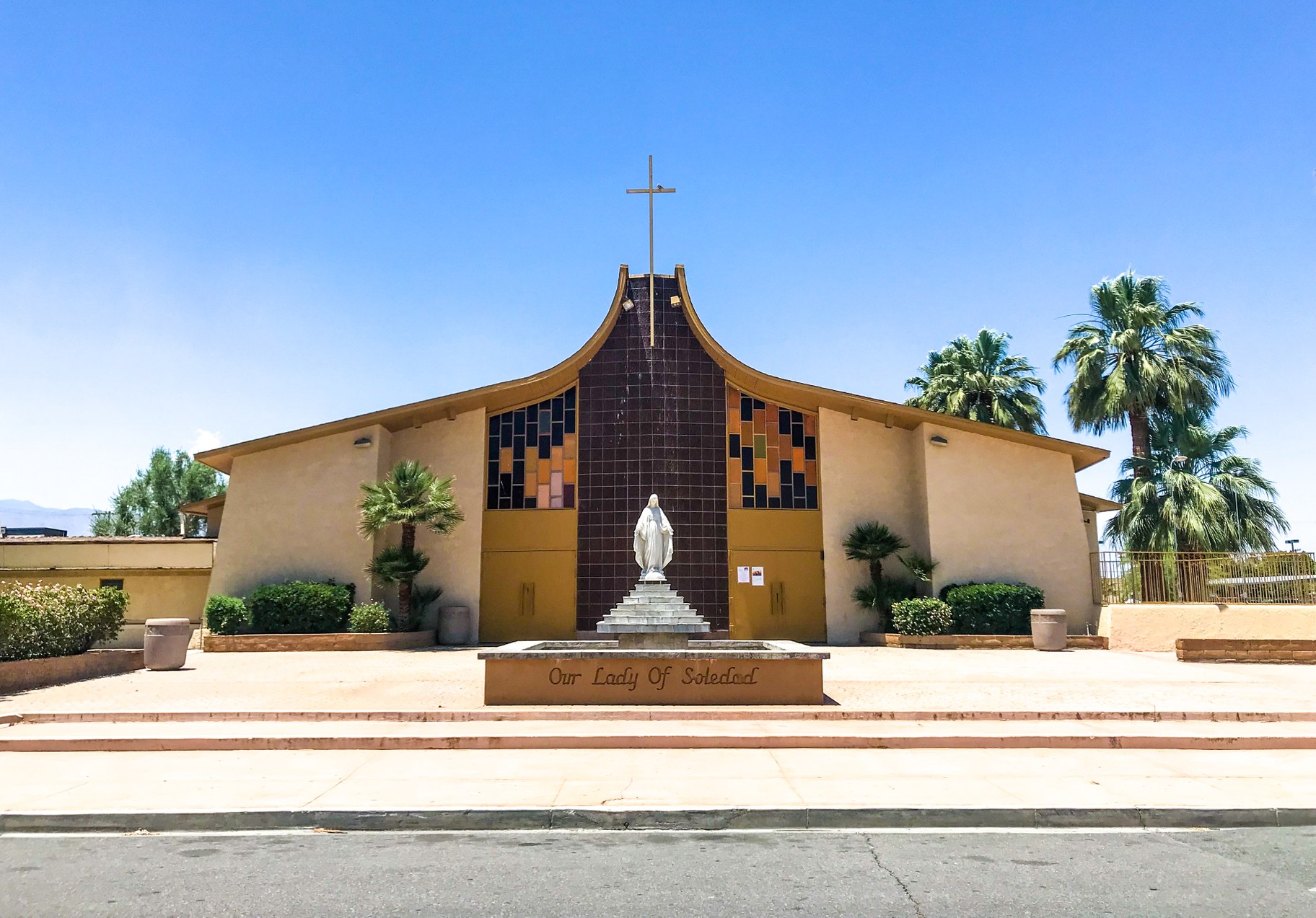 Our Lady of Soledad Catholic Church in Coachella, California. The parish has become a de facto migrant processing center in the heart of the desert. Photo by Benjamin Gottlieb

As the border has become flooded with migrants, Customs and Border Protection has outsourced some of its work to churches like this one in Coachella.

Here, church volunteers not only feed the beleaguered travelers, but help them pick out new clothes and arrange travel to their final destinations.

Most of the time that is across the country, a reality underscored by the history of Central America in the 1980s. Back then, asylum seekers were flown to the United States, mainly to the East Coast.

Now their relatives are finding their road to asylum is much more arduous. 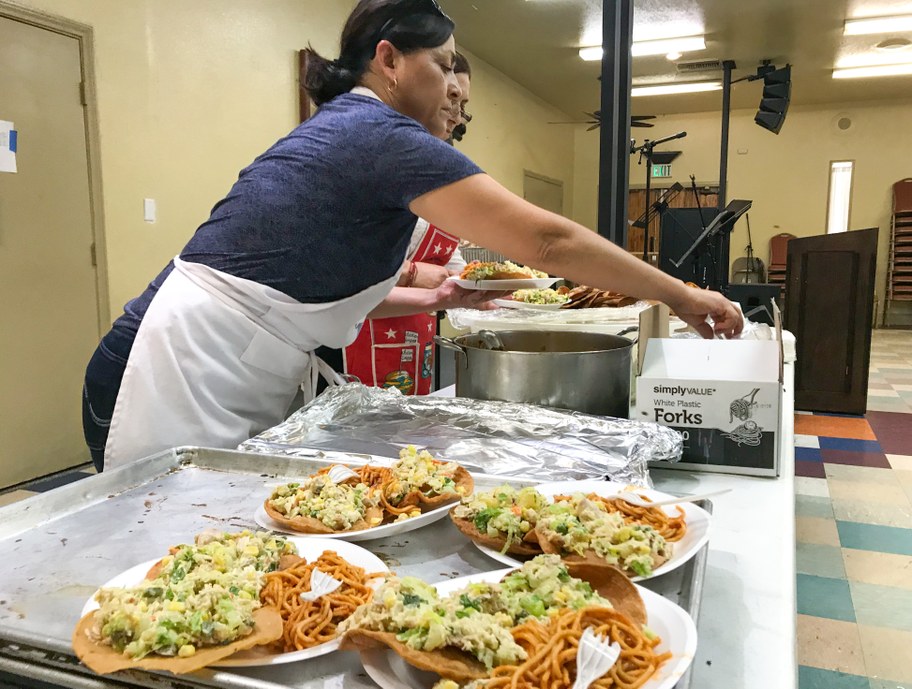 Volunteers serve up helpings of chicken salad tostadas, stewed turkey with gravy and pasta with marinara sauce to a group of about 2 dozen asylum seekers at Our Lady of Soledad Catholic Church in Coachella, California. Photo by Benjamin Gottlieb

“We receive mothers who have little infants and they hold on to them so tight. And the reason is they're fearful that the government's going to take their children from them,” Rev. Wilson says. “Here, at least, they know they’re safe and we have other mothers to hold their children so they can bathe and eat.”

Seira Godinez, 17, says she is traveling to Atlanta, Georgia to meet up with some of her relatives. “I thank God that my father and I are here,” she says. “It has not been easy.”

As for what she wants to do after she makes it, “I’m not sure yet,” she says.  “But I am ready to work hard to make it in this country.”

In the Coachella Valley, a church acts as a migrant asylum center

How one church became a migrant processing center

Rev. Guy Wilson stands at the head of a long table in his church’s mess hall, linking hands with a group of Central American asylum seekers to say grace.

Greyhound struggles with a surge in migrant ridership

The thousands of migrants who come into the U.S. every day through the Southwest borders are trying to get to their families. That’s where buses come in.

How Calif. Democrats have dropped the ball on affordable housing and homeless shelters

California Democrats, with a raft of bills and a supermajority in Sacramento, seemed poised to make something happen when it comes to housing and homelessness.