Gwendolyn Lang sitting on her porch. Photo by Anna Scott/KCRW

Standing in her den, Gwendolyn Lang looks up at a faded family portrait on the wall. Taken in the late 1970s, it shows Lang and her late husband with five of their six children. “All except one,” she said, adding that the son missing from the photo “never liked being around all the other kids.”

Lang, 80, has lived in this small, beige house in Gardena for 50 years. Now, despite the framed photos still on display, she’s moving out. Half-packed cardboard boxes sit on the floor. Lang was foreclosed on earlier this year because of her participation in a program called Property Assessed Clean Energy, or PACE, which provides LA County homeowners with no-money-down loans for eco-friendly home improvements. Borrowers repay the loans in installments that get rolled into their property taxes.

Critics of the program say lax lending standards have paved the way for predatory contractors to take advantage of elderly homeowners like Lang.

“[Lang] is not the only person who’s lost her home,” said Nisha Kashyap, an attorney with the legal nonprofit Public Counsel. Her organization and the nonprofit Bet Tzedek are suing LA County and two PACE lenders it works with, Renovate America and Renew Financial, for allegedly failing to implement basic consumer protections. “We are aware of folks who’ve been forced to sell, move into a trailer, move out of LA County, move in with family,” Kashyap said.

Lenders for the program say cases like Lang’s are unusual.

“PACE exists to provide access to affordable financing to homeowners who want to make their homes safer, more secure, and more efficient,” said a spokesperson for Ygrene, one of three lenders who provided financing to Lang, in an email. Lang’s situation, the statement said, is “a rare instance of contractor abuse of both the PACE program and a homeowner.” 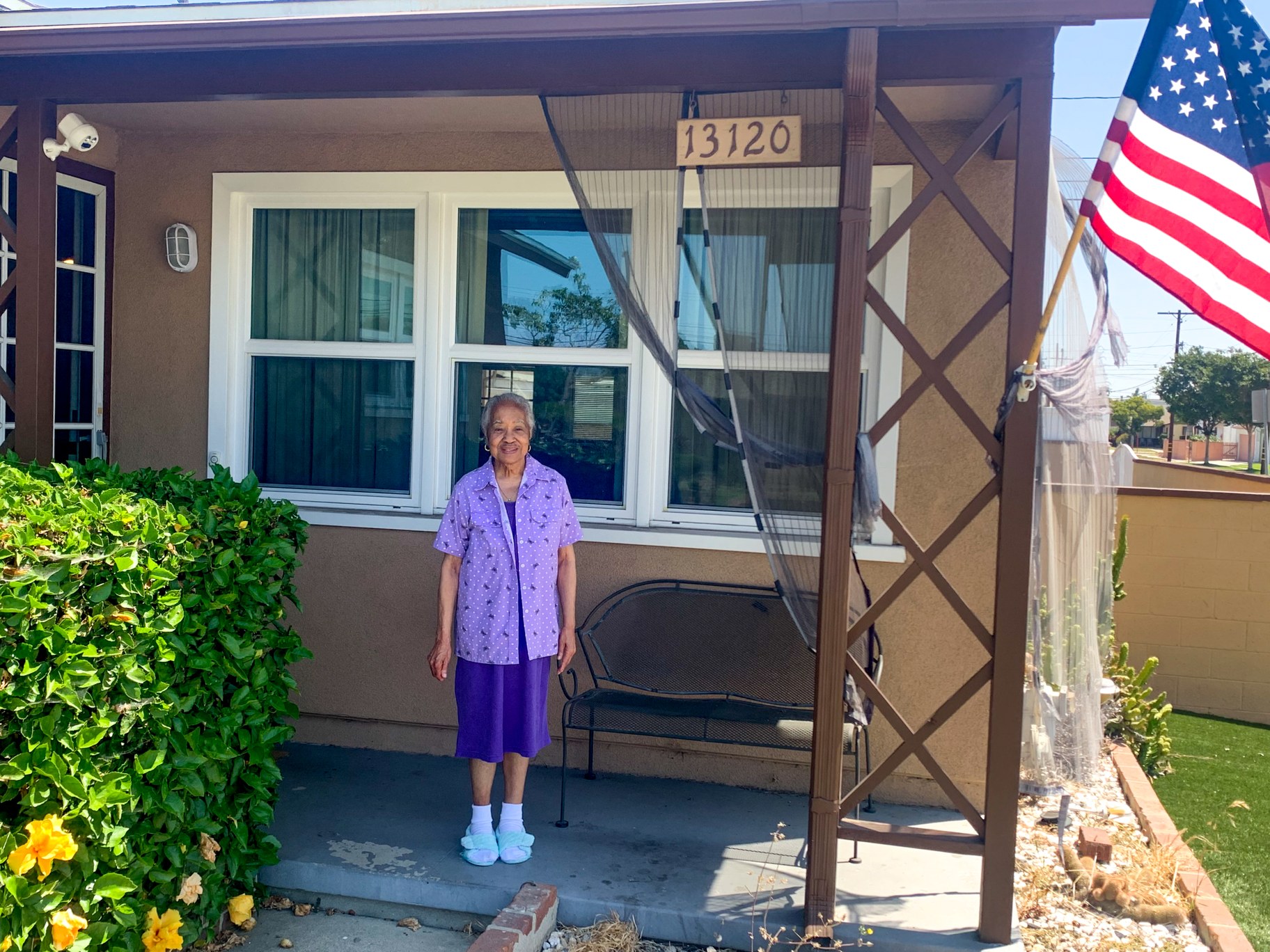 Gwendolyn Lang standing outside her house. Photo by Anna Scott/KCRW

Cities and counties around the country have PACE programs. In California, PACE has funded more than $3 billion in efficiency upgrades in recent years, according to the state treasurer’s office. The way it works in Los Angeles, the county funds the program but contracts with private lenders to handle the financing. The ground-level work of finding participants and signing them up generally falls to home improvement contractors, sometimes going door-to-door. That’s how Lang met Frank Achuff in January of 2016.

At the time, Lang’s only housing expenses were insurance and property taxes, which broke down to about $80 a month. Lang, a retired social worker, receives a little less than $1,000 a month and lives with two of her sons, who both deal with health problems. She says Achuff asked her, “What is it you really need to have done to your house to make it more comfortable and more livable?”

Over the next six months, using PACE loans arranged by Achuff, Lang financed a roof job, heating and cooling upgrades, new windows and new exterior paint, among other renovations -- all designed to save energy. During this time, Lang says, Achuff became a close friend. “He always reminded me, ‘we’re like family,’” she said. “‘I’m gonna do everything I need to help you out.”

However, Lang says, he never fully explained how the financing worked. She says Achuff told her she could make up for her higher taxes partly by referring others to PACE. Instead, she ended up with five loans she couldn’t afford from three different lenders, Renew Financial, Renovate America and Ygrene. Altogether they added up to more than $500,000. Her property taxes ballooned from $1,000 a year to $29,000.

Lang’s mortgage servicer paid off her PACE liens and then charged her for the cost, so none of the program’s lenders were directly involved in her foreclosure, which happened earlier this year. She and her sons have to be out of their house by the end of September.

In a short phone call, Achuff said, “Nobody was taken advantage of. We dotted all the i’s and crossed all the t’s,” before hanging up. 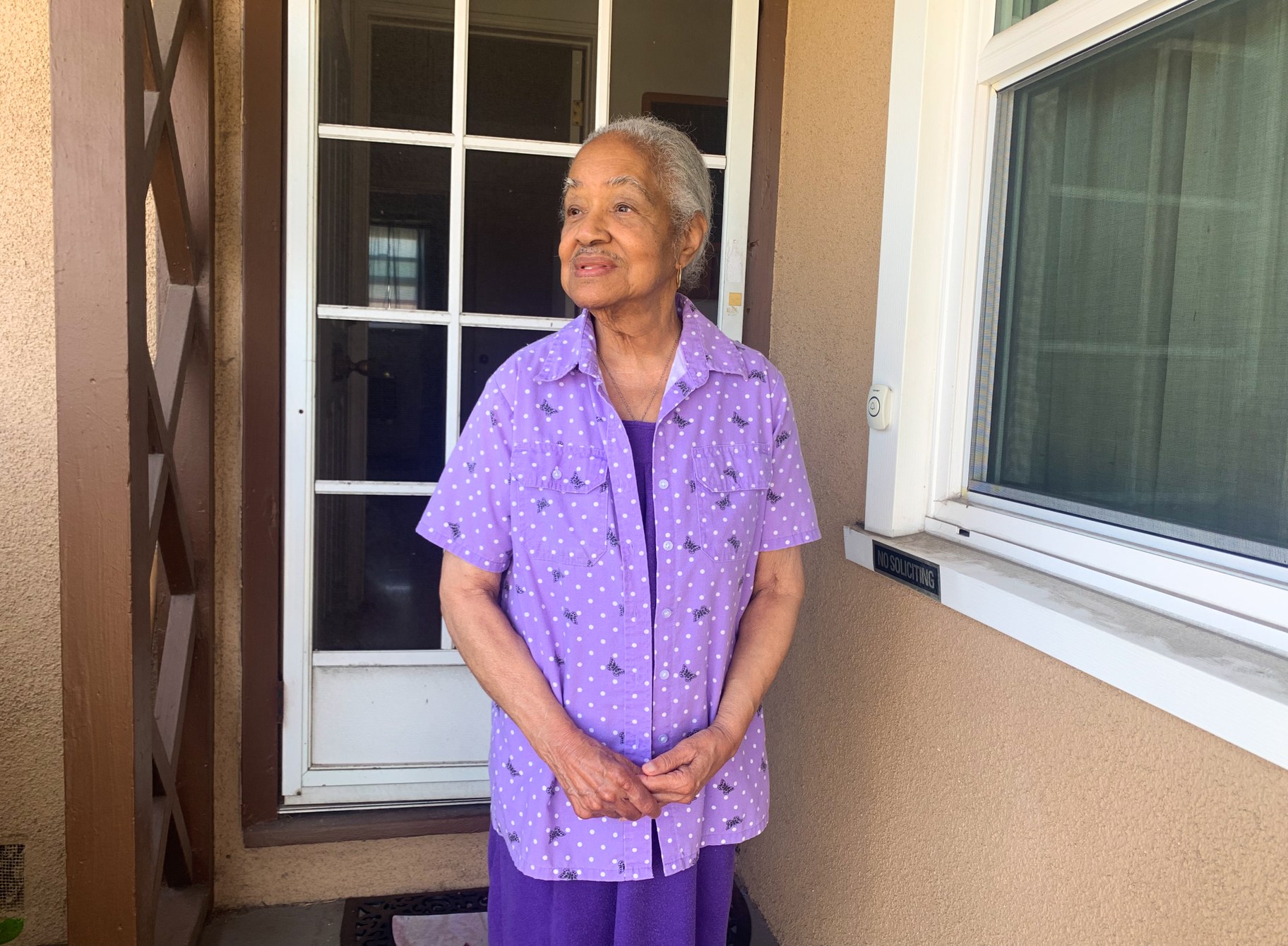 Gwendolyn Lang outside the front door of her house. Photo by Anna Scott/KCRW

The exception or the rule?

Part of the idea behind LA’s PACE program was to make it as easy as possible for homeowners to go green, in order to maximize the environmental benefits. In that quest, the county’s program was set up so homeowners could qualify for loans in just a few minutes based on a few criteria. The primary consideration was home equity. Income and expenses were not part of the equation.

“It is a basic tenet of lending that before you give someone a loan, especially a loan secured by their property, you determined that they have an ability to repay that loan,” said Kashyap, the attorney with Public Counsel. Her organization’s lawsuit was filed on behalf of several elderly homeowners who say they were talked into PACE loans they didn’t understand and couldn’t afford. Attorneys in the case are seeking class action status and estimate that there could be thousands more homeowners in similar trouble.

LA County officials won’t comment on pending litigation. The PACE lenders named in the lawsuit point to research showing that the vast majority of PACE borrowers pay back their loans on time with no missed payments. Kashyap says that doesn’t reflect homeowners struggling to make payments or simply giving up their homes, but it’s difficult to quantify how many people might be in that situation.

Last year the California legislature passed a law establishing tougher oversight of PACE, including a requirement that lenders consider borrowers’ incomes. Since the rules took effect enrollment has plummeted, a blow to the program’s environmental benefits.

Gwendolyn Lang, hoping to continue living with her sons, is still searching for a three-bedroom home on their budget of $1,000 a month or less. But just in the past week, a new possibility opened up. After being contacted by KCRW, the lenders who financed her loans reached out to and met with Lang.

In an email, a spokesperson for Renew Financial said, "Unfortunately, we were not made aware of this situation before now and no complaints were filed with Renew, which would have alerted us to look into the matter and find a resolution. Upon being alerted to the serious nature of this issue, we immediately began to collaborate on an approach that we hope will lead to a satisfactory resolution for the homeowner."

Ygrene and Renovate America provided similar statements, and both said they stopped doing business with Frank Achuff more than a year ago. Renovate America also said it has toughened its financing requirements to prevent this situation from repeating.

Lang’s not in touch with Achuff either. The last time she saw him, she says, was right before Memorial Day. He dropped by her home without warning, saying he was in the neighborhood and lost his wallet. Lang says her son gave Achuff $20, and she hasn’t seen or heard from him since.

Program to boost clean energy in LA is hurting some homeowners

By Anna Scott Standing in her den, Gwendolyn Lang looks up at a faded family portrait on the wall. Taken in the late 1970s, it shows Lang and her late husband with five...

President Donald Trump is in California for a slew of fundraisers. It’s his fourth visit since he became president. Each of the fundraisers are reportedly sold out, but...

LA pushes for cleaner cars, so why is the air still so bad?

Last summer, LA had 87 consecutive days bad air. It was the first time in decades. This week, we tied that record. Why is our air so bad, despite the fact that California is...