The 110 freeway is packed with traffic during rush hour in downtown Los Angeles. Photo by Saul Gonzalez/KQED.

Southern California has some of the worst road conditions in the country. That’s just one of the many reasons why community activists, entrepreneurs, and local politicians are keeping tabs on President Joe Biden’s $2 trillion infrastructure spending plan that’s currently being debated on Capitol Hill. Regardless of the final dollar amount, Southern California could experience a flood of investment, money for construction projects, and new job opportunities.

“This is actually money that's being kept in the community that's been spent in the community and it's providing jobs,” said Democratic Congressmember Jimmy Gomez of LA, while touring the $588 million Sixth Street Viaduct construction project between downtown LA and Boyle Heights. This bridge revitalization project, he says, are the types of things his constituents can expect more of with the passage of Biden’s infrastructure bill.

There are plans to:

- Electrify the passenger rail system from Burbank to Anaheim.

- Straighten the LA to San Diego Amtrak line to speed up travel time.

- Extend the Metrolink line in San Bernardino County by nine miles to Redlands.

- Purchase and deploy electric trucks to help ease pollution from the Ports of LA and Long Beach.

That’s all in the name of reducing emissions. 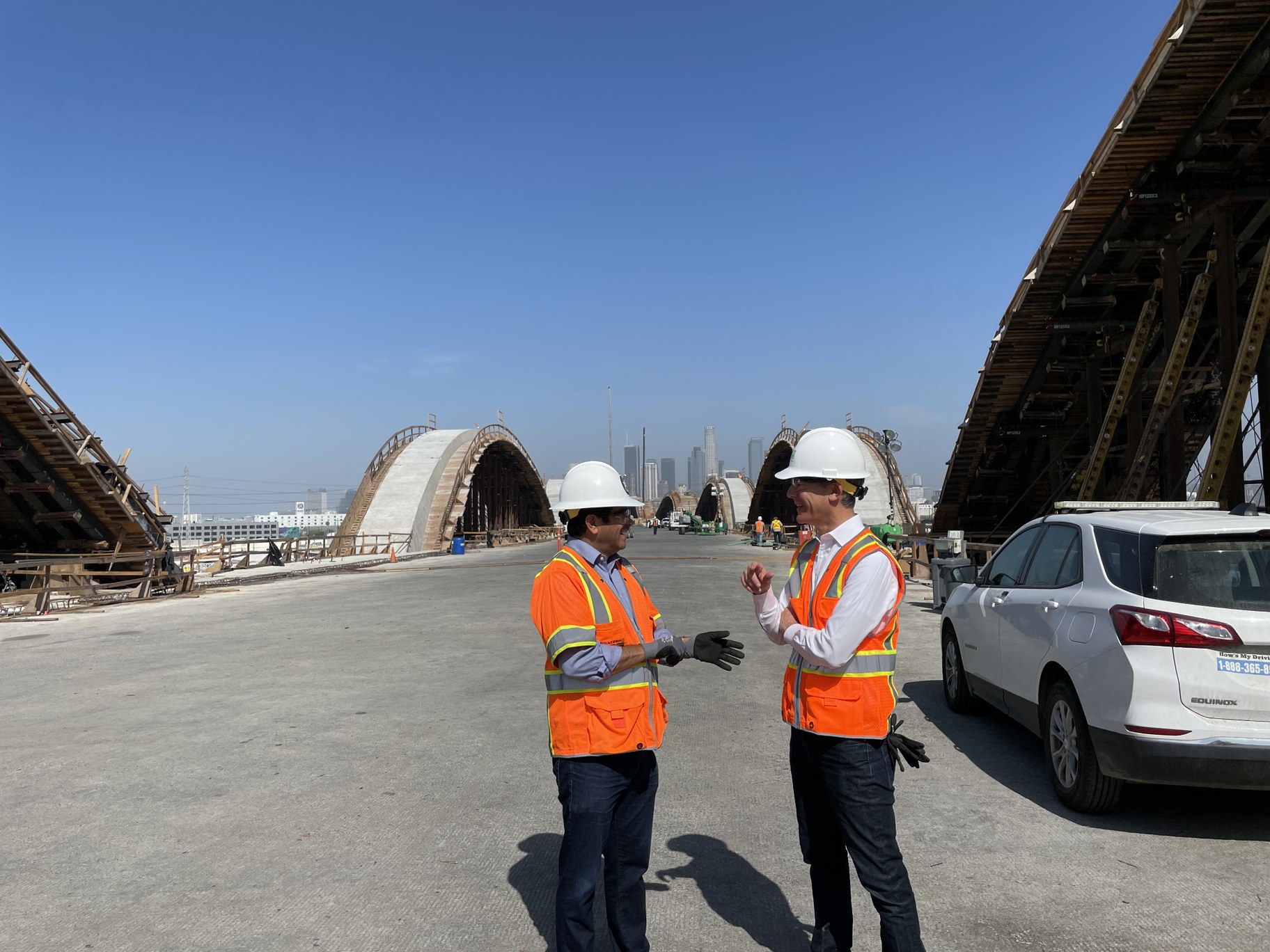 “Those emission reductions aren't just about fighting the climate crisis, they're about reducing the disproportionate burden put upon frontline communities along the 710 [freeway], the 5 [freeway], wherever they are,” said Matt Peterson, former chief sustainability officer for the City of LA and CEO at LACI, a cleantech incubator.

But which projects get funded and which ones don’t remains up in the air. A patchwork of local regulatory boards, county and city governments often jostle with state politicians and the governor’s office for position and priority. This time around, folks like Mark Lopez with East Yard Communities for Environmental Justice want a seat at the table. 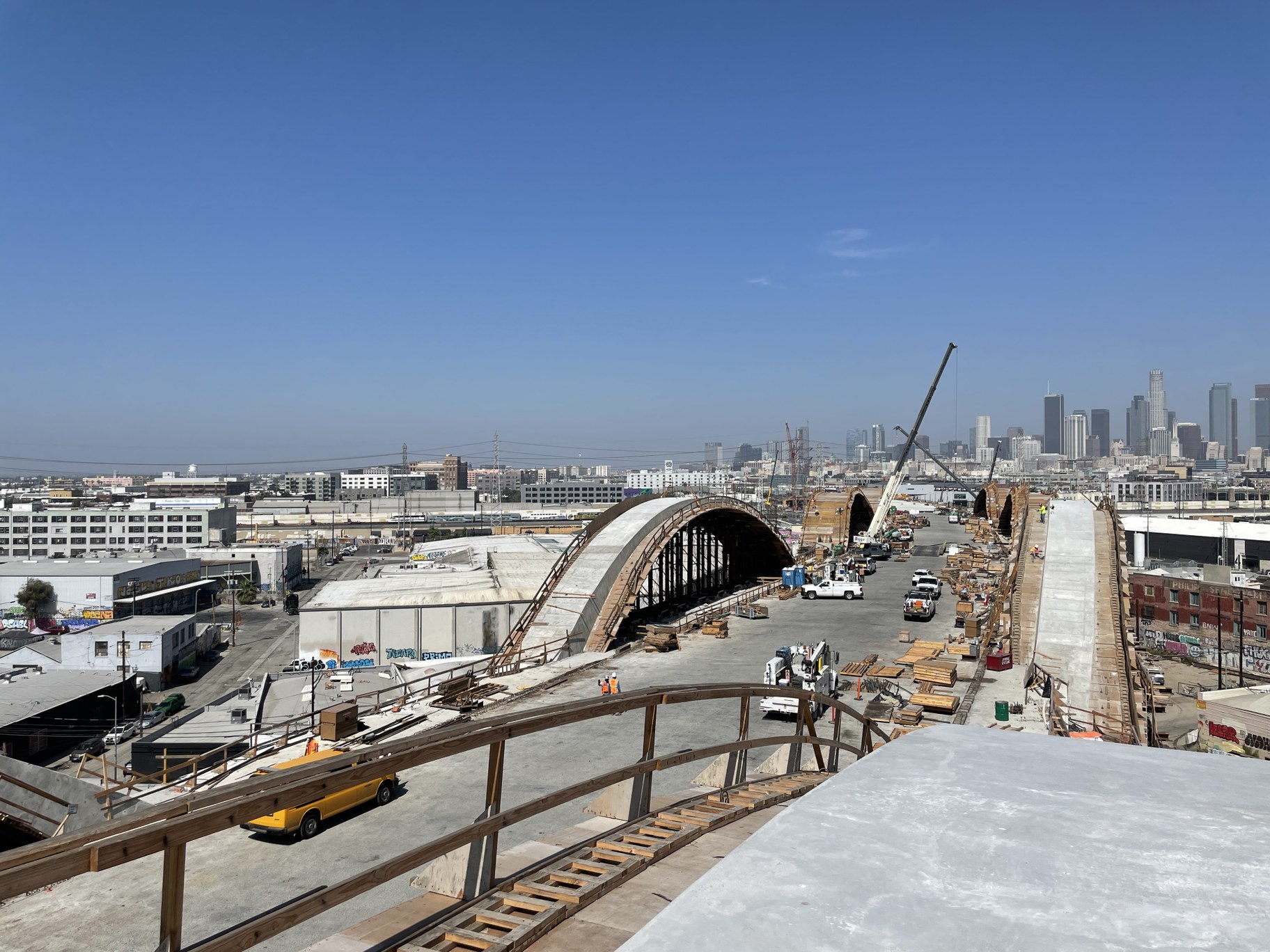 The Sixth Street Viaduct project about a year away from completion. The bridge will reconnect Boyle Heights with Downtown Los Angeles. Photo by Benjamin Gottlieb

The president and his team seemingly are aware of these dynamics, setting aside some $20 billion in his plan for redress to communities divided by past highway projects.

Still, Democrats and Republicans remain at odds over the final dollar amount for the bill and how it will be paid for. The GOP recently countered with a $928 billion proposal and remain vehemently against raising corporate taxes, something Biden insists is necessary to pay for these investments.

What Biden’s infrastructure plan means for LA and Southern California

Compton filed a legal claim against the LA County Sheriff’s Department for “rampant” fraud, alleging that the department routinely bills the city for patrols that don’t...