Sean Zahedi stands next to one of his knitting machines at Lafayette Textiles in Vernon. “My father used to have his own dye house. But because of rising labor costs, environmental regulations and water, it moved to Nicaragua,” he says. Photo by Benjamin Gottlieb.

Sean Zahedi grew up in his father’s textile factory in Vernon, playing in the rows of finished fabric as a young boy. He remembers when Lafayette Textiles had some 200 employees spinning yarn, monitoring knitting machines and washing clothing.

But when he came back to work for his father in this 55,000 square foot factory about four years ago, he found a smaller operation on the verge of closing down.

“My father used to have his own dye house,” Zahedi says. “But because of rising labor costs, environmental regulations and water, it moved to Nicaragua.”

Manufacturing jobs in California have migrated overseas for years in a race to the bottom on wages and regulations. But now many industries face a new challenge: They depend on access to cheap endless water, and California's future looks increasingly dry. Textile factory owners like Zahedi are among the first to ask: Will we adapt or call it quits?

Eighty-five percent of California is experiencing either extreme or exceptional drought conditions, the highest level there is on the U.S. Drought Monitor scale. Without water, Zahedi says, there’s no fabric.

“We are no strangers to drought [and] the situation with water, especially being here in California,” Zahedi says. “It is so water-intensive and it does translate into a higher cost of manufacturing.” 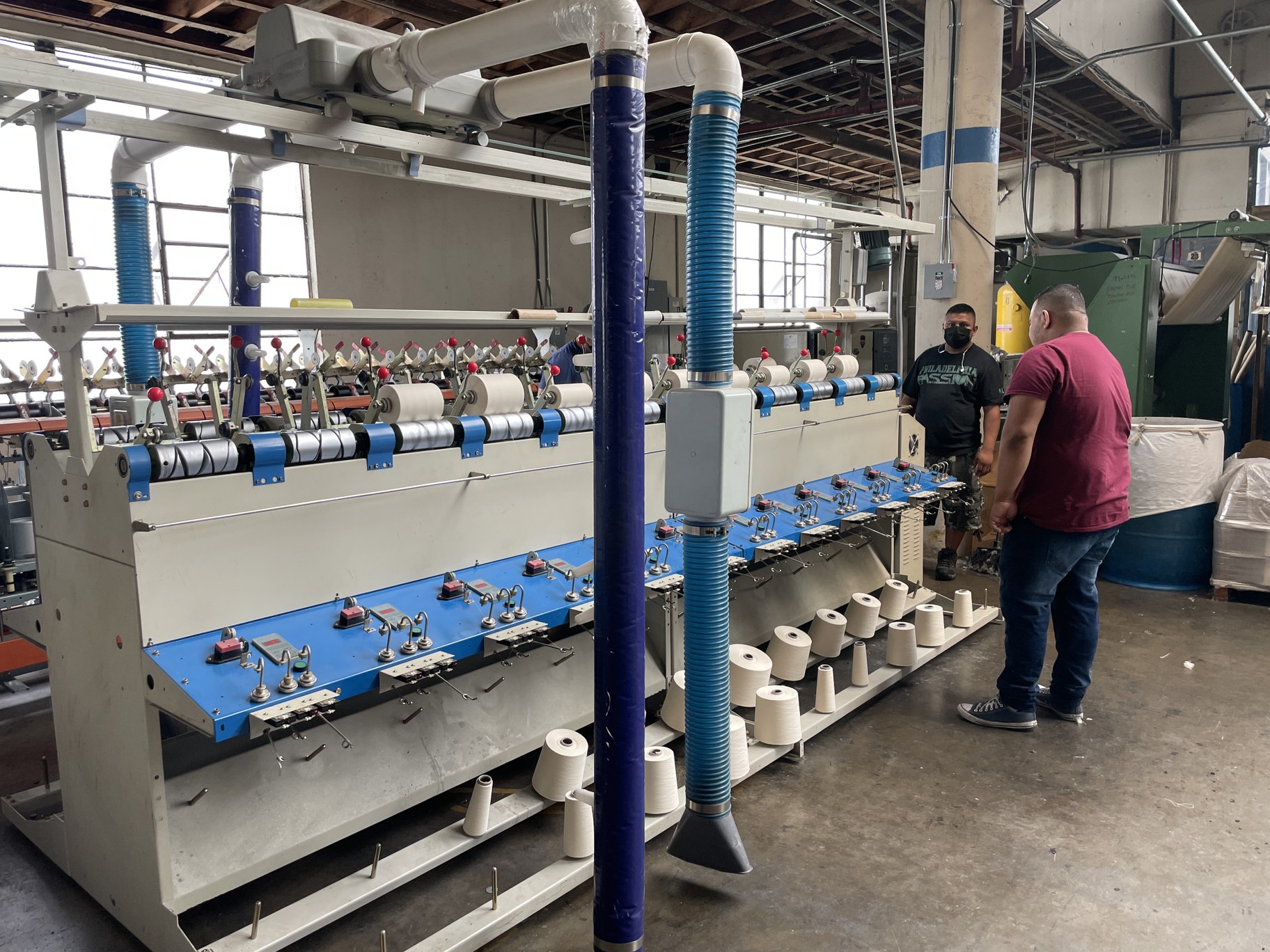 A couple of workers at Lafayette Textiles monitor a yarn twisting machine in Vernon. Photo by Benjamin Gottlieb.

Those higher water costs, especially during the last California drought, prompted factories in Los Angeles to move across the border, said Ilse Metchek, president of the California Fashion Association. In 1990, the U.S. fashion industry employed roughly 900,000 people. Now it’s about 90,000 fabric sewers and cutters. She says while LA remains a talent hub for fashion, many of the manufacturing jobs are leaving.

“The industry [has] totally changed,” she says. “If we don’t have water here, and we want to make jeans, garments, dyed t-shirts, tops, jackets, we have to make it somewhere.”

Metchek says that during the most recent state drought, businesses like dye houses were forced to turn off their water for a period of time each day.

“If you're in a dye house, the water has to run all the time,” Metchek says. “That is not a problem in Mexico.”

Mandatory water shut-offs aren’t on the table yet, but Governor Gavin Newsom recently asked all Californians to voluntarily conserve water, reducing use by 15%.

Ideally, Zahedi says, he would be able to move his factory elsewhere. But he notes, “It’s so expensive to haul these big machines, not to mention find the skilled labor needed to run them.”

“That might be like the next frontier,” he says. “How do you make fabric without water? How do you do waterless washing?” 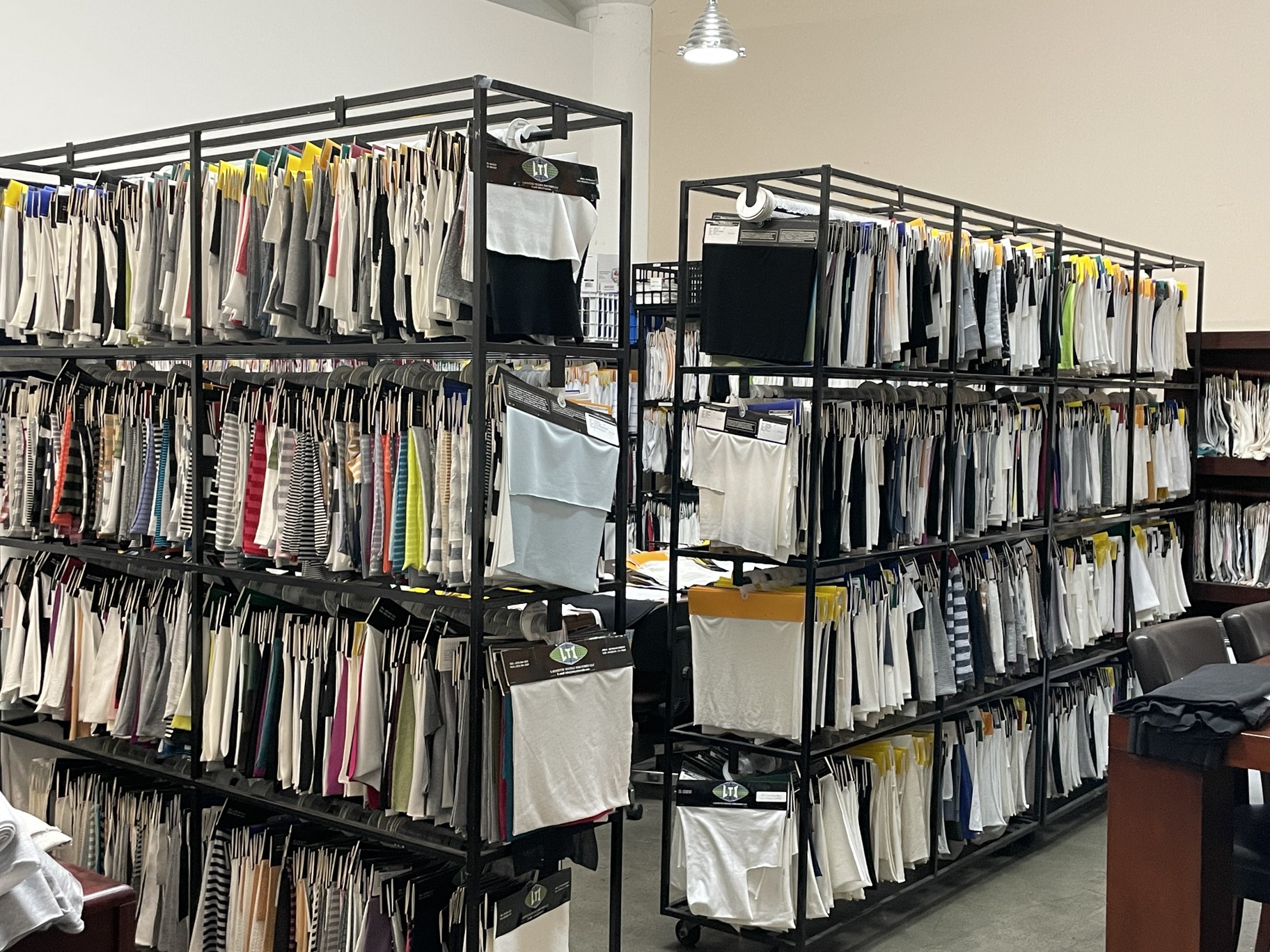 The sample room at Lafayette Textiles in Vernon. Photo by Benjamin Gottlieb.

Waterless washing may still be years, if not longer, away. But using less water?

Sanjeev Bahl and his company Saitex are already doing that. The denim manufacturer has a facility in Vietnam but recently opened a small factory in LA, a move Bahl says is possible because of his company’s washing technology.

“We use reverse osmosis and nanofiltration to purify the water. So if you can imagine, the water is being recycled all the time,” he says.

The upfront costs are high, Bahl says. It took his company about seven years to break even on these greener washing machines. But he thinks it’s worth it.

“Most people, they look at low-hanging fruit and immediate returns on investments,” he says. “I would stick my neck out to say that radical resource productivity is profitable. So whether it be with water or energy … anything that you conserve helps you to reduce your cost.”

Many industries depend on access to cheap endless water, and California's future looks increasingly dry. Textile factory owners are among the first to ask: Will we adapt or...

Jeff Bezos and Richard Branson have been criticized for spending hundreds of millions of dollars on a two-minute trip to space, while many people on Earth struggle with...

LA bars and restaurants enforce their own restrictions as COVID surges

With rising COVID numbers and a mask mandate reinstituted across LA, bars, restaurants, and pop-ups are implementing coronavirus restrictions at their own discretion.