Miriam Hershman and Sagar Yadav just got hitched in front of five guests at Hershman’s grandparents’ front yard in Sherman Oaks. The bride got dressed in her dad’s old bedroom. They played their first dance off an iPad. The reception was catered by the groom’s favorite: Domino’s Pizza.

“I thought I’d be a bridezilla and I wasn’t. The flowers weren’t the exact color I wanted but that was perfectly fine. It was still beautiful. We went to the Dollar Store for decorations and did a bunch of DIY things. It was a fun project,” Hershman says.

Hershman is from Thailand and was raised Jewish. Yadav was born in India. Because of the COVID-19 pandemic, the couple scrapped their plans for a traditional Indian wedding in November with hundreds of guests. Instead, most of the guests attended via Zoom. And they blended all their traditions into what they called a “Hin-jew” wedding.

“It had customs that pertained to Jewish tradition, and then we had the garland exchange and the red dot that comes from Hindu as well as Thai. So we just made it ours, which was really special,” says Yadav. 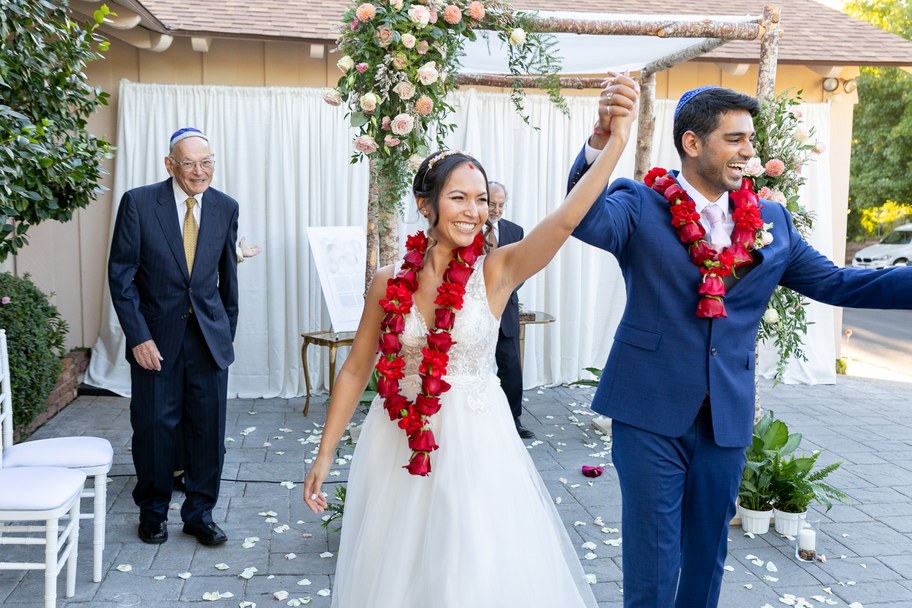 Hersman wears a bindi and Yadav wears a kippah in their backyard Hindu-Jewish hybrid wedding. Photo by Jessica Franz Photography.

California has banned gatherings of anyone outside your own household, which means weddings are all but off the table. So these days, engaged couples have to decide whether to postpone their pre-pandemic plans indefinitely, or scrap them entirely and make a pandemic plan like Hershman and Yadav.

None of those options look great for vendors like their photographer, Jessica Franz, who relies on the $72 billion wedding industry to pay the bills. She says she’s doing about a quarter of the weddings she normally would. They’re also a fraction of the size, which means fewer hours of work.

“People don’t have the money, so people want to pay half of what you charge. I’ve lost clients that way and I’m doing discounts. I’m not charging for travel anymore. I’m giving more edits for my packages and all these things, so that sometimes is just not enough.” 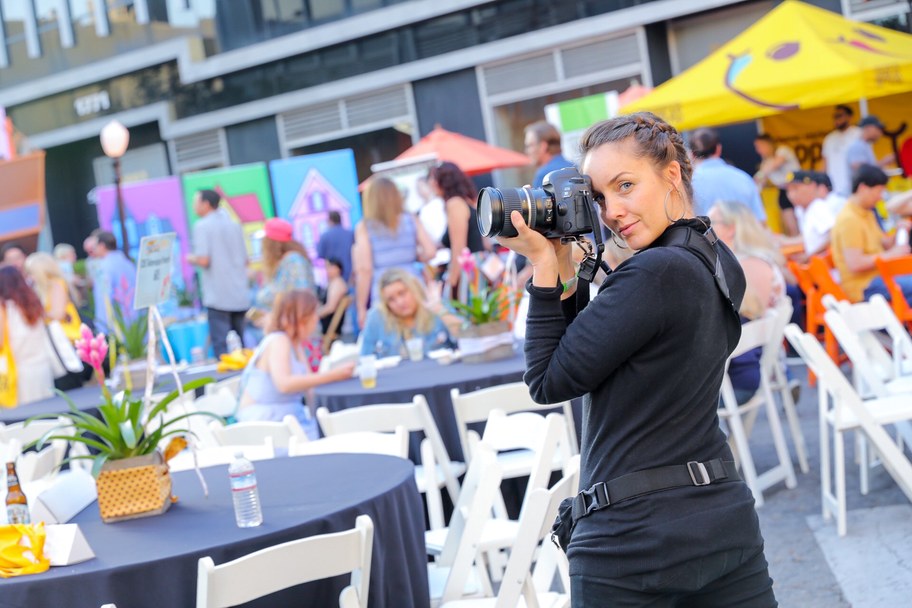 Jessica Franz poses while shooting a pre-COVID event. She says she’s working a fraction of the hours she used to. Photo courtesy of Jessica Franz.

She says the level of work isn’t sustainable, and she’ll rely on her savings to make ends meet this year. But at least the work is still coming in. Other vendors, like LA event planner Jessica Carillo, aren’t so lucky.

Carillo is still getting weekly inquiries from couples about 2021 and 2022. But she’s responding with uncertainty, and uncertainty doesn’t sell.

Even in the best of times, planning a wedding is high stakes. So many things can ruin the big day. That list gets longer when you add a global pandemic.

Right now, rules for how to gather safely keep changing. Californians can’t gather with anyone outside the home. But religious ceremonies of up to 100 people are allowed outdoors. A reception wouldn’t be allowed, but vendors with a restaurant license can seat tables of six outdoors, as long as everyone’s masked, and nobody’s sitting with people they don’t live with. It has left weddings in a gray area.

Nicole Stubbs manages LA River Studios by the L.A River in Glassell Park, which typically hosts weddings every weekend. She says people are renting out Airbnb houses since venues like hers can’t take bookings.

But even if local governments changed their minds, weddings wouldn’t appear overnight.

“It’s not like if LA County decided or if the state decided hey guess what, we are going to allow weddings tomorrow, that we could just open our doors and we’ll have a wedding walk into our doors tomorrow. This is a planning event, so then you have to talk to the client [and] all of their vendors that were contracted. Can the balloon guy come? Can the linen person come? Can the officiant make it on this day?” Stubbs says.

Many couples who aren’t willing to take that gamble are eloping instead. And the people who marry those couples, like Officiant Marie Burns Holzer, are busier than ever.

“I’m easily 100% over what I normally do, I’m double for what my normal booking capacity for this time is. It’s crazy,” she says.

Holzer is sold out for the rest of 2020, half booked for 2021, and marrying people five to six days a week. She says half the couples she’s marrying weren’t planning to elope originally. That brings more than just joy to wedding day. 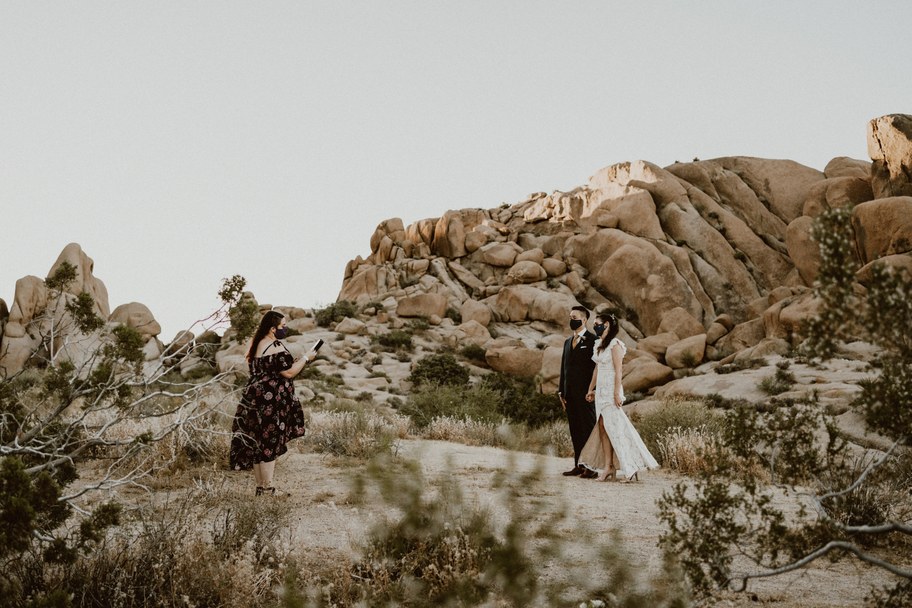 Holzer now requires all her couples stand 10 feet away and stay masked, like this eloping couple. Photo courtesy of Marie Burns Holzer.

“There’s a lot of grief and disappointment because it’s not what they planned. … A lot of people have envisioned saying their vows and seeing full faces,” she says. “But once we actually get in the ceremony, there’s something so powerful about being able to celebrate something good right now and to know they’ve endured this together … when right now the world feels like a field of dumpster fires.”

Sagar Yadav and Miriam Hershman say the circumstances forced by the pandemic ended up making their day more special.

“Having a smaller and more intimate setting allowed us to really enjoy each other’s company. I’ve been to weddings where the bride and groom say hi to a billion people and not enjoy the day together as much,” she says. “I appreciated not having to entertain people but have our moment. It was so special.”