Elizabeth Medina (right) with her friend and street vending partner Victor Renteria pose for a photo as they sell electronics and other knick-knacks near MacArthur Park. All photos by Benjamin Gottlieb.

From MacArthur Park to Cudahy, street vending is an integral part of LA’s culture. Yet despite years of rule changes meant to allow vendors to operate legally, hardly any do, leaving the vast majority of LA’s estimated 50,000 vulnerable to tickets and other fines.

The City of LA estimates that 3-4% of vendors actually have the proper documentation. Advocates for street vending say it’s around 1%.

City and county officials say the pandemic has severely impacted their ability to do outreach and help vendors get their permits. But activists and vendors alike say the city and county permitting processes are too costly, difficult to navigate, and foster a generally unsupportive environment.

“There are vendors who don’t know how to read,” says Aureliano Santiago, a former street vendor of nearly 30 years. He now advocates on behalf of vendors. “How are they supposed to know what to do?”

What do you need to sell on the streets of LA?

Permit requirements differ depending on what you’re selling. But the first step for any vendor is to have either a Social Security Number or an Individual Taxpayer Identification Number (ITIN).

Without one or the other, you can’t get a permit. From there, here’s what’s required for merchandise vendors:

In addition to securing all the necessary permits, there are other requirements for where you are allowed to sell. They include rules for how close a vendor can be to a tree well, fire hydrant, etc., and can be found here. Violation of these rules can result in fines.

The City of LA’s permitting matrix. Activists say these printouts are difficult for many vendors to navigate, let alone understand. Graph courtesy of StreetsLA.

If you’re a food vendor, you must also secure a permit from the LA County Department of Public Health (DPH). That permit requires that vendors meet the following: 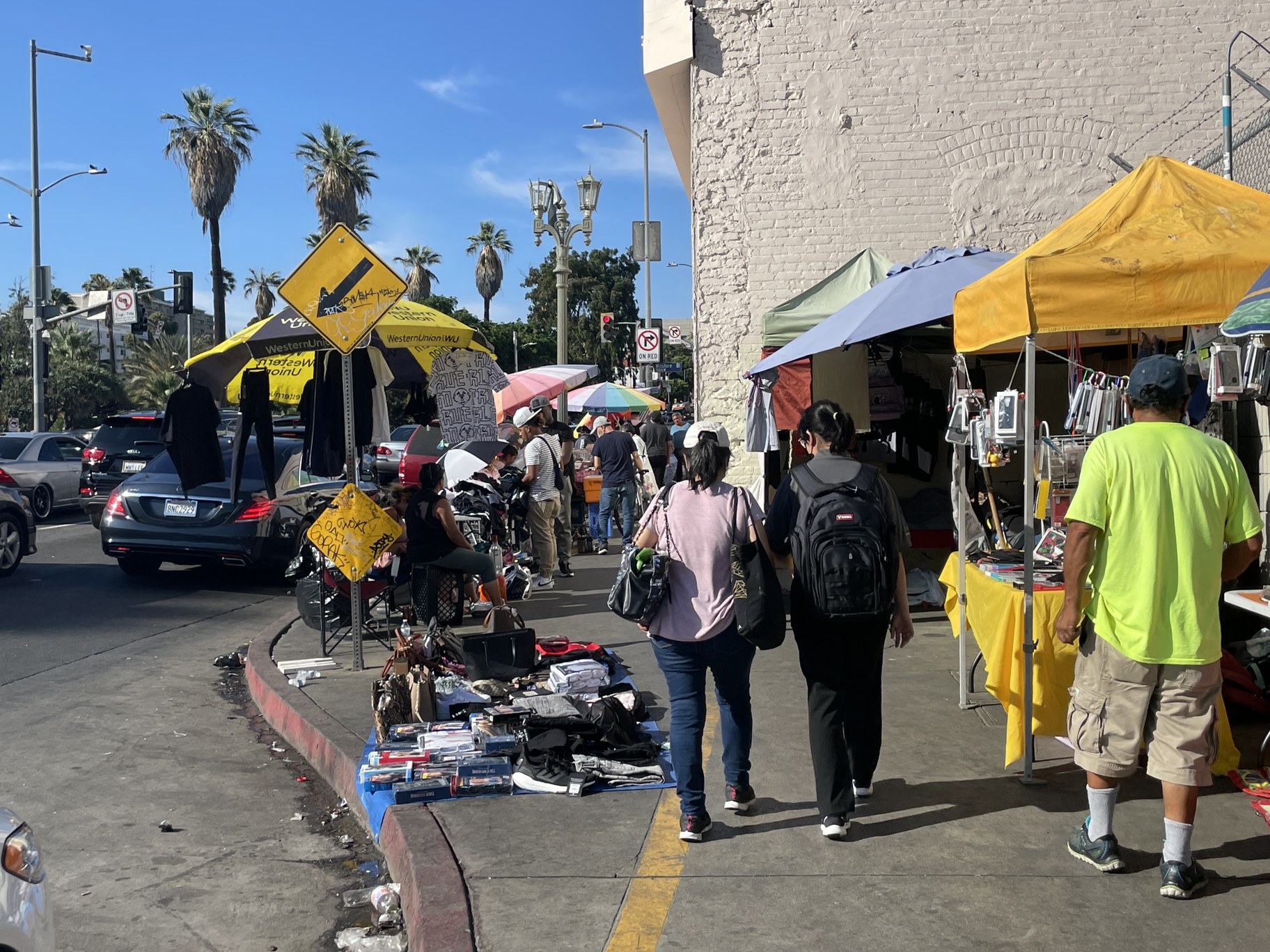 Pedestrians weave their way through the crowded sidewalk on the east side of Alvarado Street near MacArthur Park.

Why is it so hard to get a permit?

It depends on who you ask.

David Rivera, who oversees the sidewalk vending program for the City of LA, says the pandemic significantly impacted how many permits his office can issue a day.

So far, Rivera says, his office has issued around 1,800 vending permits, a number he believes would be much higher if vendors didn’t need to make an appointment to secure one. Additionally, Rivera says the LA County Department of Public Health has issued few, if any, new sidewalk vending permits since the start of the pandemic.

“I don't want to blame another agency, but the holdup is LA County [Department of] Health. … [Vendors] not being able to obtain that card, or whatever it is they need from them, in order to sell their product,” Rivera says.

DPH said via email that it would “continue to provide education and support to those who are interested in learning about the requirements to obtain a health permit.”

DPH also said it has issued a total of 479 food cart permits since January 2019.

Advocates for street vendors say the permit fees are too high and the webpages set up by the city meant to help vendors navigate through the process are too complicated.

“There are vendors who don’t know how to read,” Santiago says. “How are they supposed to know what to do?” 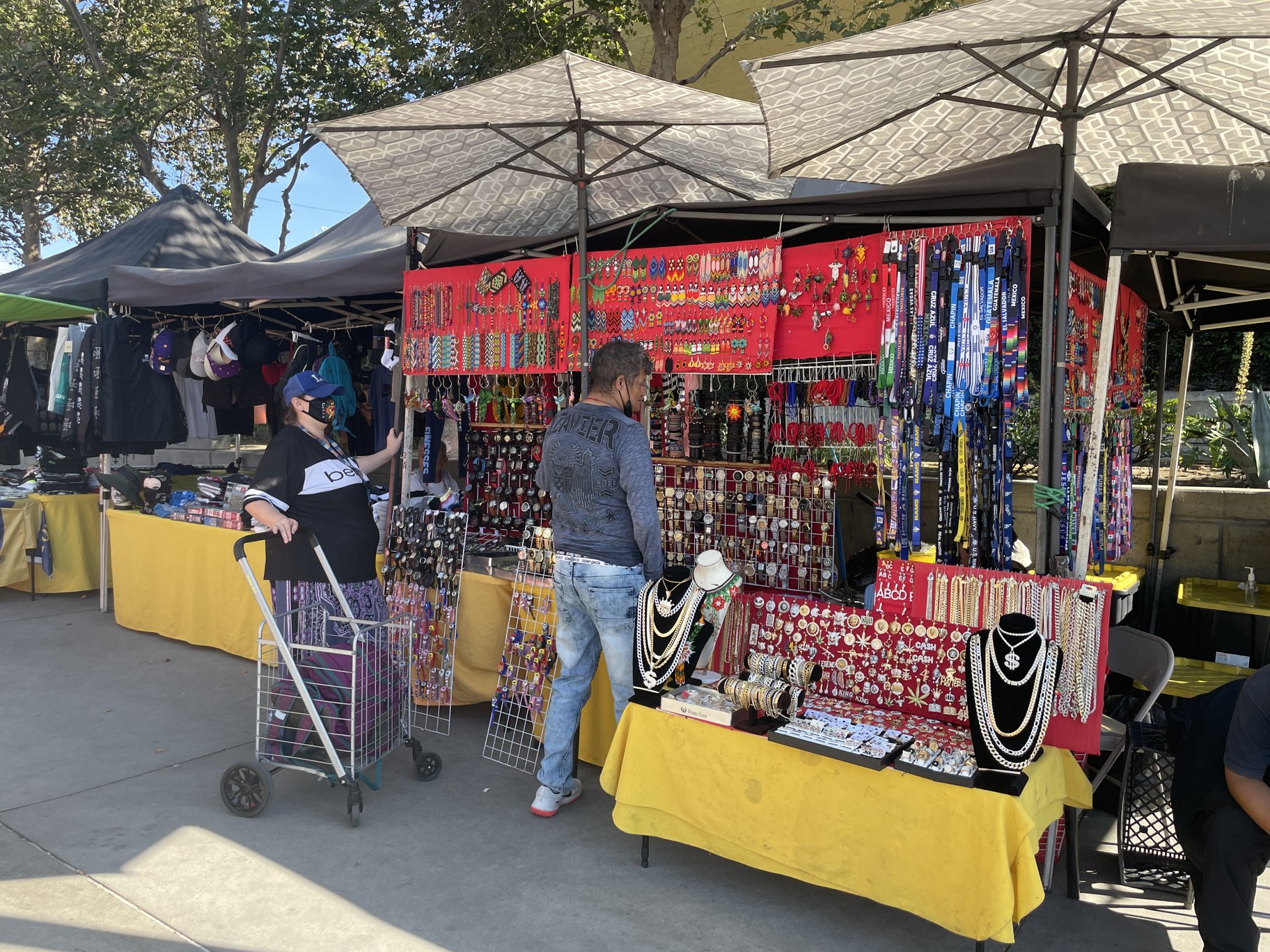 A street vending booth sells jewelry and other chotskies near the Metro station at MacArthur Park.

What do vendor advocates want to see changed?

A recently released report by the UCLA Law School and Public Counsel outlines a series of recommendations for how LA’s permitting process for street vendors could be improved:

For vendor advocates like Lyric Kelkar with Inclusive Action for the City, cost is a big hurdle that needs to be addressed.

“Many of these folks make less than $15,000 a year, especially in the last year [during the pandemic],” Kelkar says. “These permit fees would be a significant part of their income.”