Malibu West Fire Brigade members learn how to use a pump and ask for advice from Keegan Gibbs, the leader of the Point Dume Brigade (pictured second from right), and Bobby Milstein (far right), owner of SoCal Fire Supply. Photo by Adriana Cargill.

Keegan Gibbs was watching the Woolsey Fire blaze through Malibu on CBS2 News when he saw his family home had burned to the ground. It was one of 1,500 structures destroyed by the wildfire three years ago. In the video footage, a reporter walked through thick clouds of smoke, and in the background was Gibbs' family home. It was a total loss, just a few pieces of wood still burning. Three people died as they fled the most destructive fire in LA County history. But Gibbs didn’t let his personal loss stop him from coming to the aid of his community.

“I think that was the moment that everything switched for me,” Gibbs says. “You feel really helpless at that moment because, you know, ‘What could I have done differently? Why did this happen?’ So when that happened, I really was like, ‘Okay, what next?’”

He didn't know at the time, but what he did next would lead to the creation of a potentially game-changing new model for fighting wildfires. This new idea came directly from the mistakes Gibbs, his neighbors, and the LA County Fire Department made during the Woolsey Fire.

The morning after the fire came through Point Dume, Gibbs drove back to his neighborhood to find spot fires still burning. He and his friends drove around putting them out with shovels or whatever they could find. And then, over the next couple days, this ad hoc response turned into a highly coordinated community-wide response. 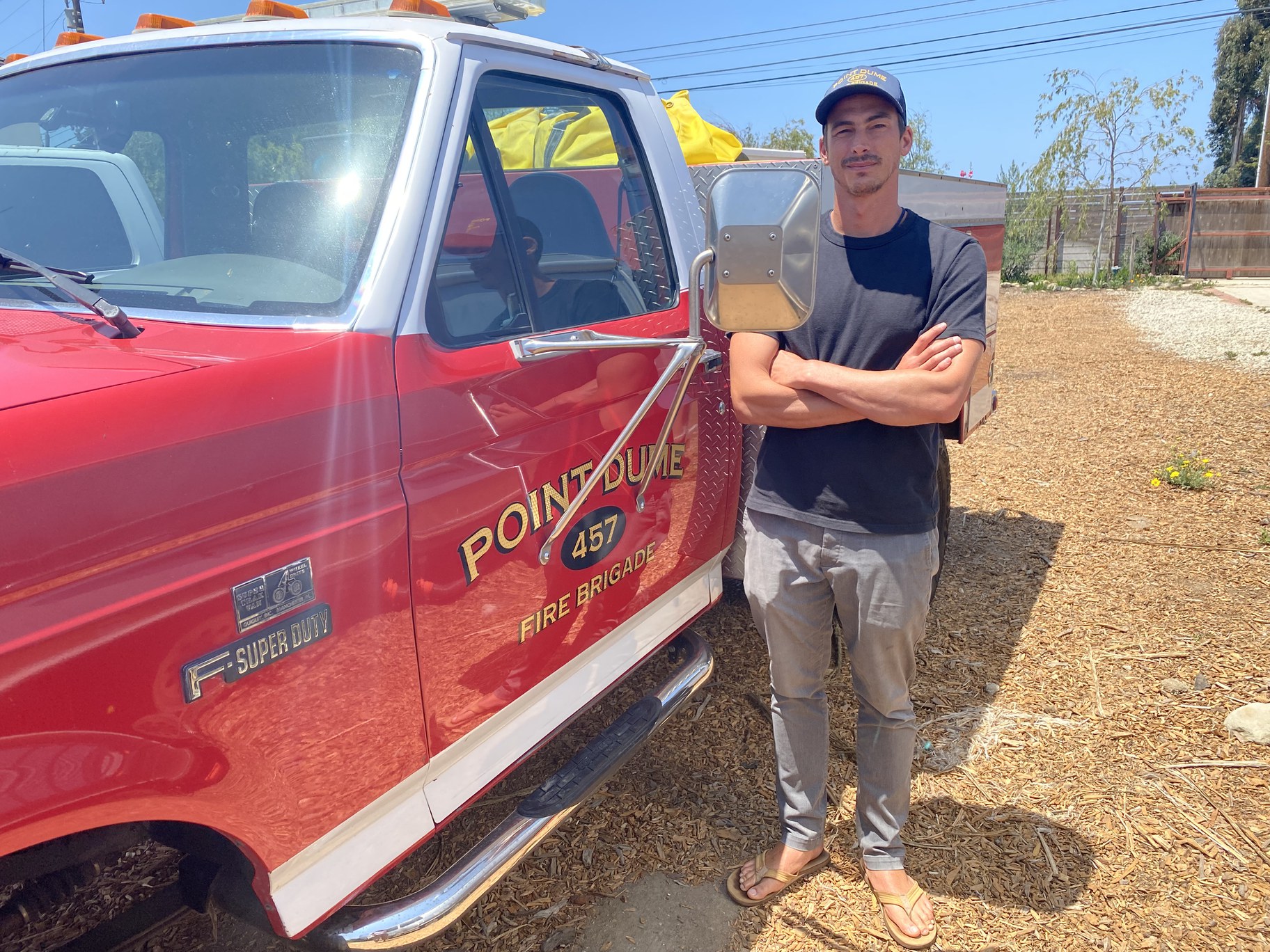 Keegan Gibbs stands in front of the Point Dume Community Brigade truck. After the Woolsey Fire, his friend group used leftover money raised to help the community to purchase this truck, which they use for trainings. Photo by Adriana Cargill.

Because of evacuation orders, Malibu was cut off from the outside world. Those who stayed during the fire were now without water, power, or food. So Gibbs’ group of friends helped coordinate supplies via boat to help those in need. When the Sheriff’s Department wouldn’t let them land, they got on their surfboards and paddled in the supplies.

They set up a disaster relief center in the Point Dume Elementary School parking lot. They cooked meals, comforted people who lost their homes, checked on the welfare of the elderly, and continued to put out spot fires started by embers. They did everything ad hoc, and some of it was dangerous, such as moving hundreds of gallons of gasoline during a wildfire with embers floating around in the air.

“Was it the safest thing in the world? Maybe not,” says Brent Woodworth, the CEO of the Los Angeles Emergency Preparedness Foundation. But he was impressed by what Gibbs and his friends accomplished, and saw the potential to turn this community response into something safer and replicable in other places.

“It becomes very obvious that if we can do a better job of training, educating, motivating people to take the proper action in both preparing for, and responding to hazard events of all types, we're going to have a safer society,” he says.

Training volunteers and coordinating with local agencies are key factors in this new model of wildfire response that Woodworth, Gibbs, and a couple dozen of his Malibu neighbors have been developing since the Woolsey Fire. They call their approach “community brigades.” The brigades are meant to fill in the resource gap left when firefighters are stretched too thin. 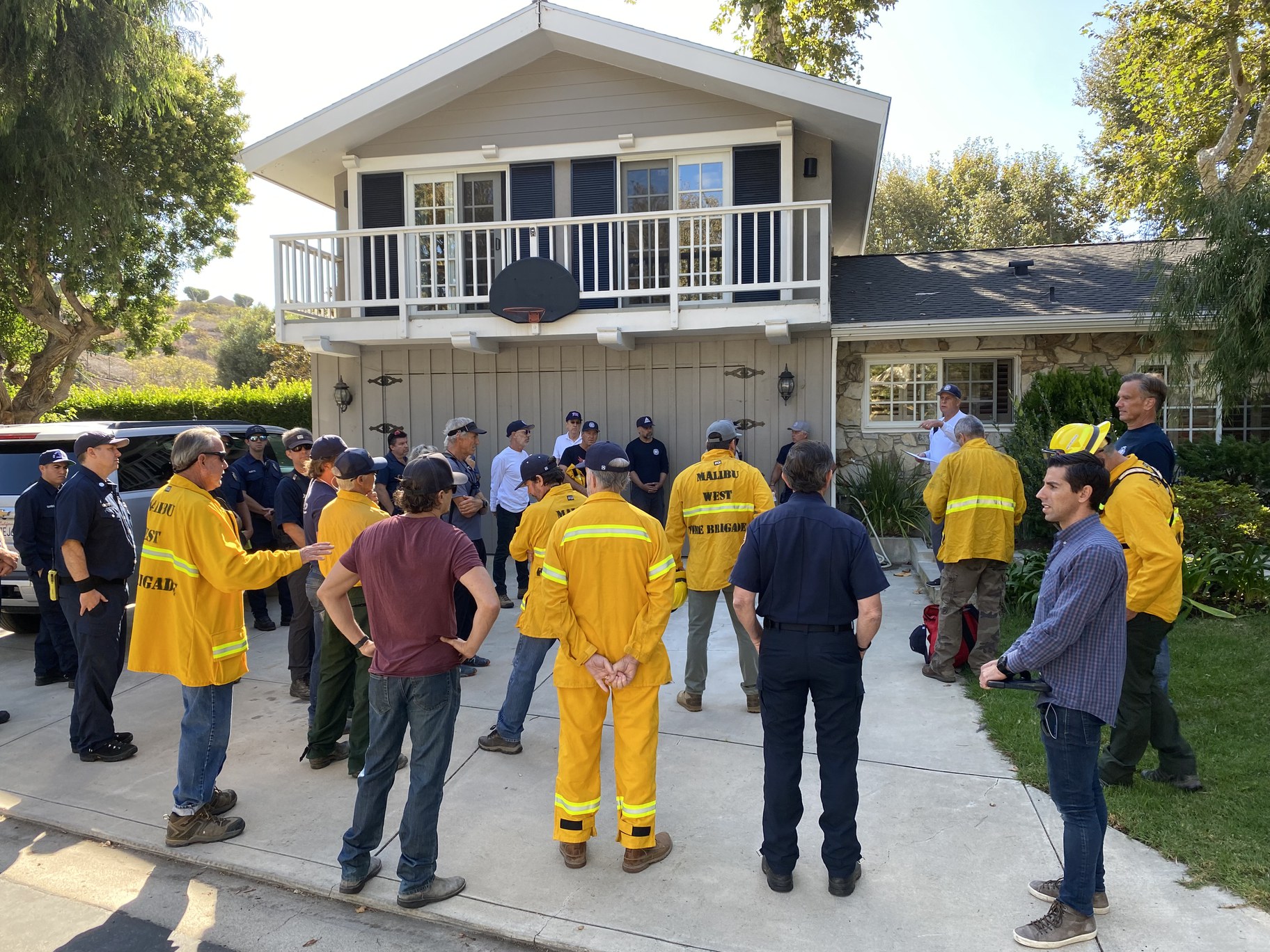 Volunteer firefighting is nothing new, but the community brigade program is different because it requires a lot less training, a smaller time commitment, and fewer physical requirements. It also focuses specifically on wildfires and natural disasters rather than the more classic saving-people-from-a-single-building fire.

The community brigade program leaves the heavy duty firefighting up to the pros, and is instead designed to leverage resources already in the community, such as local knowledge. It will give volunteers about 50 hours of training on wildfire behavior, safety, and preparation. There's also a big focus on communication and learning the Incident Command System first that responders use to talk to each other during a crisis. While the big emphasis is on wildfires, they will also learn an “all hazards” approach that would allow them to repurpose what they’re learning for any natural disaster.

So far about 100 volunteers are participating in six neighborhood brigades. The community brigade pilot program is just waiting for the LA County Fire Department’s approval to formally launch the program.

Anyone can sign up to be a volunteer, and there are roles for people to do support and logistics, and for people who are physically able to do what's called “fire front following.” They won't fight the fire front — that’s left to the professionals. Instead, Gibbs explains, they’re “doing mop-up in the community. Looking for embers, looking for combustible stuff, sealing everything up.”

Most homes that burn down actually catch fire from embers, after the fire front comes through. Home defense is just one part of brigade duties. They'll also go door to door and help people evacuate, shut their windows, clear brush, shut off water mains so burst pipes don’t decrease water pressure (all-important in a fire fight).

“People want to be involved in protecting their own community,” says Woodworth. “It's sort of human nature and we want to give them that chance.” 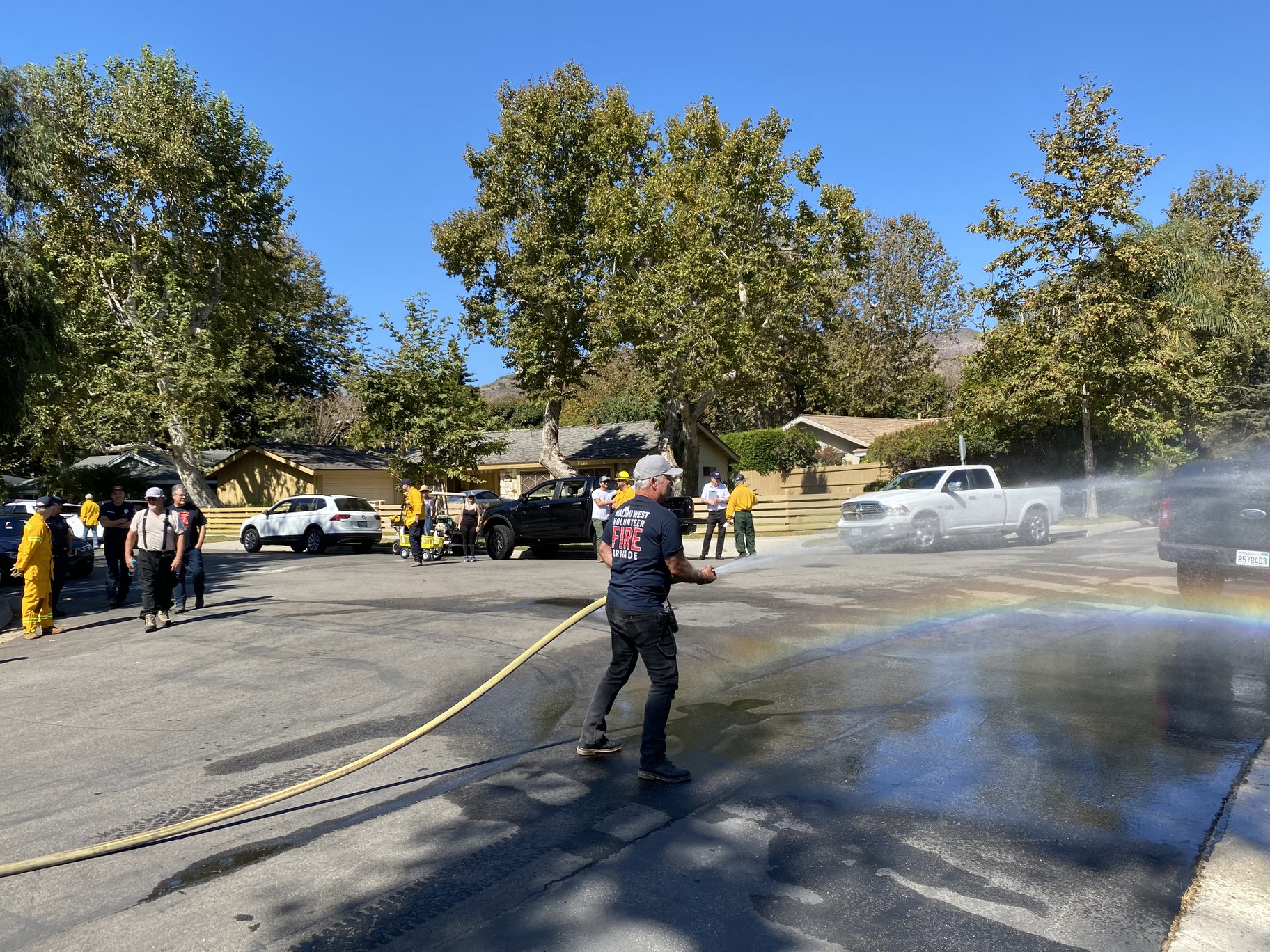 But there are some cautionary tales when civilians get involved. For example, one long-standing program in Australia called “Stay and Defend or Leave Early” (SDLE) meant that when a wildfire came through, Australia didn’t require residents to evacuate. If residents wanted to protect their homes themselves, they were allowed. But after 173 people died in the devastating 2008 fires, the most deadly to date in Australian history, that policy was put under review by the government.

The question is: Can community brigades do a version of “stay and defend” that isn’t as risky? Can they also save more homes and lives?

“There's no perfect answer to that,” says Malibu City Council Member Mikke Pierson, who stayed to defend his own home and his neighbors’ homes during the Woolsey Fire. In Malibu, some residents have a long-standing tradition of staying during a wildfire. He adds, “But probably the people who stay are gonna stay anyhow. So if they have training in equipment, I'm hopeful that that makes a difference.”

It’s an approach that worries some firefighters, who are afraid residents will put their own lives at risk and then require a dangerous rescue. Rick Mullen is the LA County fire Captain of Engine 72 in Malibu, and while he says the fire department doesn’t want people to stay after evacuation orders are in place, he’s realistic enough to know some people do.

“The resiliency of the neighborhood, in other words, the amount of homes that burned down, the greatest effect on that is not necessarily what the fire department does,” he says. “It's really what the residents do in a big, long equation.” That includes things like home hardening, having a plan, clearing brush, as well as wildfire response.

Still, many in Malibu think brigades could move the needle in a statewide conundrum that just keeps getting worse. Fires are getting bigger and more destructive, but there aren't enough public resources to save every home.

This feature was adapted from the podcast Sandcastles, which tells the story of how a bunch of surfers — Gibbs included — pioneered this new community brigade model. It drops December 2021. Check it out at Wavemakermedia.org.

This model relies on training volunteers and coordinating with local agencies. It requires a lot less training and a smaller time commitment, and offers more roles than...

In his memoir, “Becoming Trader Joe: How I Did Business My Way and Still Beat the Big Guys,” Joe Coulombe dives deep into the out-of-the-box business strategies that still...

Did FBI step over the line with surveillance? OC Muslim men bring forth class action lawsuit

The U.S. Supreme Court is hearing arguments today in a class action lawsuit that three Muslim men from Orange County filed against the FBI. The plaintiffs argue that the FBI...